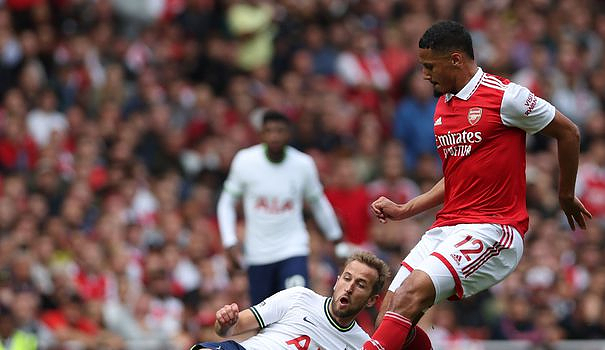 . Saliba takes care of his rating

After his laborious performance with the Blues against Denmark (0-2), eight days ago, William Saliba has largely made up for it by being one of the strong men of Arsenal, winner of the London derby against Tottenham (3- 1).

The central defender has won 100% of his aerial duels, an area where he suffered in Copenhagen, even as he struggled against Harry Kane or Richarlison, who were particularly adept in the air.

Saliba delivered a near-perfect stat sheet against the Premier League's second-best attack at kick-off: no opponents were able to dribble past him, he completed 96% of his 71 passes and recovered 11 balls.

"It was a fantastic performance (from Arsenal). But I want to mention one name in particular: the reason why (this game) seemed so simple was William Saliba," said Cesc Fabregas, on BT Sports. . "He looks so easy (on the pitch), he could be Arsenal's centre-back for the next 15-20 years," he said.

. Varane released as a precaution

Raphaël Varane, the boss of the blue defense, left with an injury (ankle) shortly before half-time in the Manchester derby, heavily lost 6-3 by his United against City. He walked off the pitch shortly after blocking a left-footed strike from Phil Foden.

"When the score is 4-0 (it was 3-0 when Varane left, editor's note), you have to take it out, because you don't want to risk a bigger injury," explained his coach Erik ten. Hag.

Since his arrival in Manchester in 2021, Varane has regularly been injured, in the leg, groin, hamstrings...

Manchester United must communicate more precisely on the nature of his injury, probably midweek, before the Europa League match at Omonia Nicosia on Thursday.

Randal Kolo Muani returned to Frankfurt full of energy from his first gathering at Clairefontaine with the France team.

With Eintracht, the center forward put the defense of Union Berlin, the unexpected leader of the Bundesliga, in great difficulty. He offered Frankfurt's first goal to Mario Götze, playing three opponents and making his speed speak. This is already his fifth assist of the season.

Elusive for more than an hour, his performance was however tarnished by his exclusion in the 67th minute. After receiving a first yellow card for an elbow, Kolo Muani touched the ankle of the Hungarian defender of the Union, Andras Schaäfer and received a second warning.

He will still be one of the strong men of Eintracht on Tuesday against Tottenham in the Champions League before his suspension in the league on Saturday in Bochum.

With a hat-trick against Nantes (4-1) on Sunday, Wissam Ben Yedder swallowed the frustration born of his non-convocation with the Blues in September, the last internship before leaving for Qatar. Since June 2019, the center-forward of Monaco had chained all successive rallies, with the exception of that of November 2020 due to a positive test for Covid-19.

"Places are expensive in the France team", admitted "WBY" after the victory at Louis-II. "Everyone dreams, as a child, of playing in a World Cup. In more complicated times, you have to work twice, three times more. I don't give up, I keep moving forward," he added.