Before Joe Biden, his Iranian counterpart Ebrahim Raisi denounced the hypocrisy of the West and showed himself intransigent before the General Assembly of the United Nations, while he is under pressure on the nuclear program of his country and on the women's rights, and that he is the subject of a complaint from dissidents in New York. 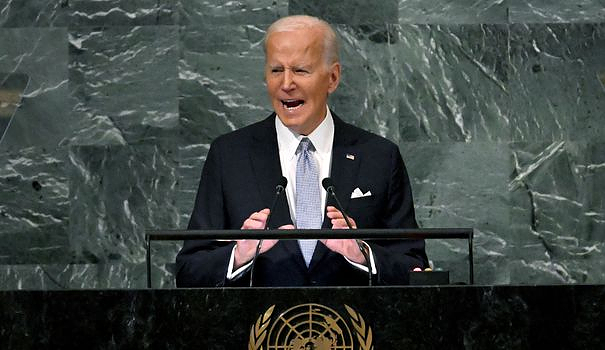 Before Joe Biden, his Iranian counterpart Ebrahim Raisi denounced the hypocrisy of the West and showed himself intransigent before the General Assembly of the United Nations, while he is under pressure on the nuclear program of his country and on the women's rights, and that he is the subject of a complaint from dissidents in New York.

In many cities of Iran, such as in the northwest in Urmia and Sardasht, nocturnal demonstrations broke out again on Wednesday evening for the fifth consecutive night.

They follow one another in fifteen cities since the announcement of the death of Mahsa Amini, Friday, to the holy city of Qom, south-west of Tehran, birthplace of Iranian Supreme Leader Ali Khamenei.

The death toll stands at six dead according to the Iranian authorities, to which must be added two people killed in the night from Tuesday to Wednesday according to a Kurdish group based in Norway.

Amnesty International also counted the death of six men, a woman and a child. The organization denounced a "brutal repression" and "the illegal use of shots, steel balls, tear gas, water cannons and sticks to disperse demonstrators".

In the south, videos apparently from Wednesday show protesters burning a huge portrait of General Qassem Soleimani, killed by a US strike in Iraq in January 2020.

Elsewhere in the country, demonstrators set fire to police vehicles, threw stones at security forces and chanted anti-government slogans, according to the official Irna news agency.

Police responded with tear gas and numerous arrests, the agency said. Other images show protesters resisting law enforcement. The most viral on social networks are those where we see women setting fire to their headscarves.

Men and women, many of whom had taken off their headscarves, gathered in Tehran and other major cities across the country, according to Irna.

"No to the headscarf, no to the turban, yes to freedom and equality!" Shouted these demonstrators in the capital, their slogans having been taken up in solidarity in New York or Istanbul.

However, information circulates with difficulty in Iran where social media were very disturbed on Wednesday evening.

Aged 22 and from Kurdistan (north-west), Mahsa Amini was arrested on September 13 in Tehran for "wearing inappropriate clothes" by the vice police, a unit responsible for enforcing the strict dress code in the Republic. Islamic.

Activists said the young woman had received a fatal blow to the head, an allegation denied by officials, who announced an investigation.

Women in Iran are required to cover their hair and the morality police further prohibit them from wearing short coats above the knee, tight pants, jeans with holes as well as brightly colored outfits.

For Mahtab, a 22-year-old make-up artist wearing an orange scarf that lets her hair show, interviewed in Tehran, "the scarf should be a choice, we should not be forced".

The announcement of the death of the young woman, whose Kurdish first name is Jhina, aroused strong international condemnation: from the UN, the United States, France, the United Kingdom in particular.

"We stand with the courageous citizens and courageous women of Iran, who are demonstrating at this very moment to defend their most basic rights," President Biden told the United Nations.

British Foreign Minister James Cleverly spoke on Wednesday morning in an interview with AFP of a possible "other path" for Iranian leaders.

Speaking at the UN, President Raisi immediately accused the West of applying a "double standard" in matters of human rights, denouncing the death of women from indigenous peoples in Canada or Israeli repression in the occupied Palestinian territories.

These demonstrations constitute “a very important shock” in Iran, “it is a societal crisis”, declared to AFP David Rigoulet-Roze, researcher at the Institute of international and strategic relations (Iris).

These demonstrations are "perhaps the beginning of a great change", added the director of the NGO Iran Human Rights (IHR), Mahmood Amiry-Moghaddam, interviewed in Oslo.

In New York, President Raisi is also the target of a civil complaint announced Tuesday by Iranian dissidents and former political prisoners, suing him for the death sentences of thousands of people when he was a judge in the 1980s.

Finally, Mr. Raisi, under pressure from the West to relaunch the agreement governing Tehran's nuclear program, assured the UN that his regime was not seeking to acquire atomic weapons.