Beyond the collieries - the Ruhr area and its castles

The building is not simply old, it is ancient: Broich Castle in Mülheim, with its meter-thick walls, dates from the second half of the 9th century. 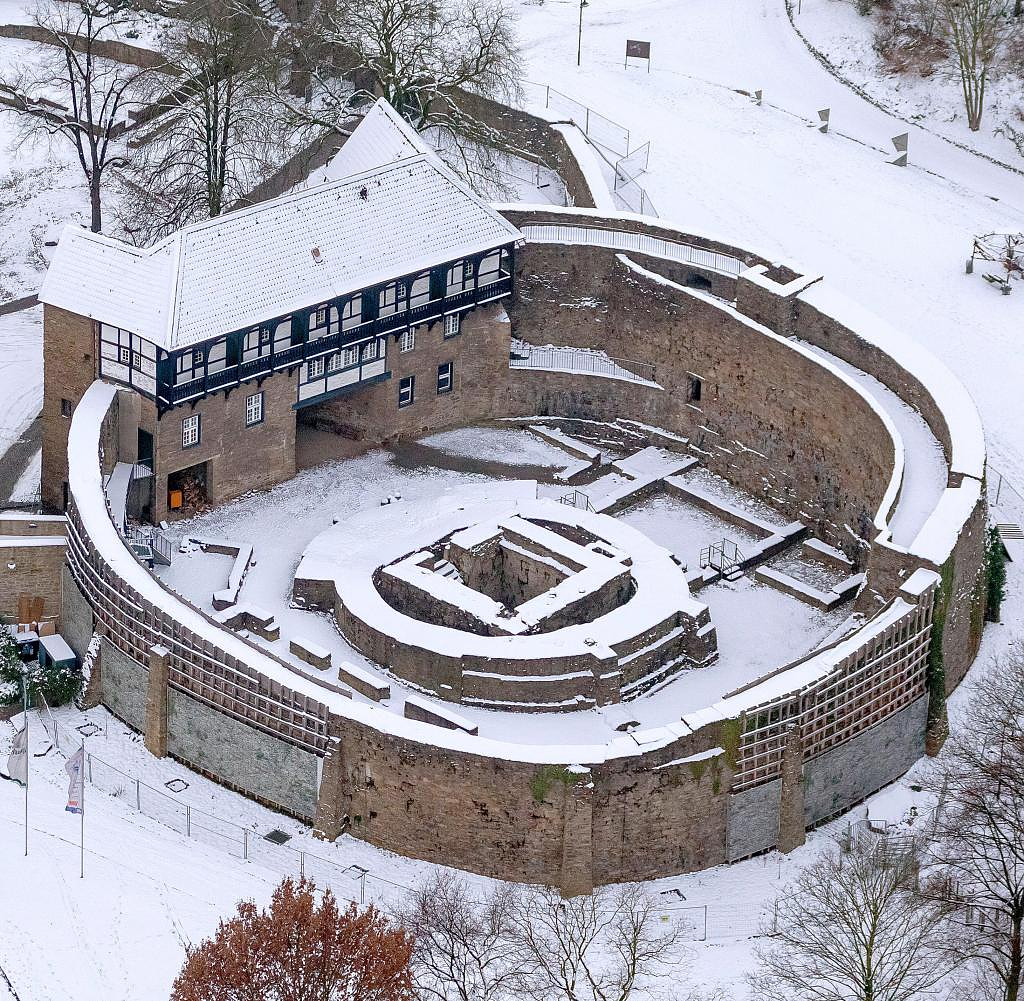 The building is not simply old, it is ancient: Broich Castle in Mülheim, with its meter-thick walls, dates from the second half of the 9th century. The fortress was built near the Ruhr to protect the trade route between Duisburg and Paderborn.

It was not until the 1960s that excavations uncovered its true age. The people of Mülheim were amazed: their castle was no longer just the oldest castle in the Ruhr area, but also one of the most important Carolingian fortifications in the German-speaking world.

The well-fortified castle was expanded as a baroque residence in the 17th century. Today Broich is owned by the city, the old walls were renovated over a period of ten years from 2009 with the help of subsidies and generous donations.

On the edge of a hilly park, the building stands in contrast to the high-rise buildings in downtown Mülheim. Weddings and conferences take place in the knight's hall as well as in the coat of arms and fireplace room (schloss-broich-muelheim.de).

In addition to the wedding room of the Oberhausen registry office, this palace also houses the Museum Ludwiggalerie. The filigree castle was built between 1812 and 1821 according to the plans of the Münsterland architect August Reinking and is therefore one of the youngest aristocratic residences in the Ruhr area.

Since 1998, the Ludwig Gallery has been showing changing exhibitions and photographic art with pictures by, for example, Peter Lindbergh and Jim Rakete (ludwiggalerie.de).

Two thick round towers and the remains of a moat, that's exactly how you imagine a medieval castle to be. As early as 1266, a house from Vondern was recorded in documents for the first time. Destruction in the turmoil of war, inheritance disputes among the nobility, frequent changes of ownership, new neighbors from 1903 due to the Vonder colliery, hail of bombs in World War II - the walls of Vondern Castle and the baroque manor house have seen a lot.

The penultimate chapter of Vodern is that of a farm. A farmer kept dairy cows and chickens there, but farming had no future squeezed between the A42 motorway and a marshalling yard. The farmer lost a legal dispute with the city of Oberhausen and had to give up farming in 1984.

"And then we took over a castle that wasn't intact, an adventure," says Walter Paßgang from the association Förderkreis Burg Vondern. Today, the manor house with the knight's hall is available as a branch of the Oberhausen registry office for weddings. Vondern Castle and the small park are also a popular destination for cyclists on the Ruhr, the Industrial Culture Autoroute also passes directly by (burg-vondern.de).

In the distance, traffic roars over the A42, also known as the Emscherschnellweg, and the huge cooling tower of the Herne combined heat and power plant rises above the houses with its 300 meter high chimney. But nearby, Strünkede Castle takes you back to the 13th century, when the moated castle was first mentioned in a document.

As the castle looks now, it was built in the 16th century. The architectural style of the Strünkede family residence: early baroque with a moat and a park in the French baroque style.

In the 19th century, however, the manorial era ended, and Strünkede became a restaurant, police headquarters and children's convalescent home. Today the castle houses the collections of the Emschertal Museum: Herne's history from the Neanderthals to the industrial city (herne.de).

Visitors have the best view of Bodelschwingh Castle, an elegant Renaissance-style building, from the top of Kirchweg. You should be there very early in the morning when the sun is shining from the east - then photographers have an ideal location, according to the advice of Mireta and Felix zu Innhausen-Knyphausen.

The 23rd generation of the family lives in the house - like their ancestors since the castle was built in 1302. This is unique among the castles and palaces in the Ruhr area. A part of the 16-hectare palace park, which was redesigned from a baroque garden to an extensive English landscape park by the garden architect Carl Eduard Adolph Petzold in 1866, is therefore closed to the public.

Petzold had learned from Prince Hermann von Pückler-Muskau, the star among the garden and landscape planners of the time. Visitors have access to the castle a few times a year, for example on the day of the open monument in September.

In addition to the noble family, tenants also enjoy the special castle atmosphere at Bodelschwingh, as the stables, coach house and barns were converted into apartments and offices in the 1980s. At that time the family had to give up farming in Bodelschwingh; the new construction of the A45 motorway had cut through the fields (schloss-bodelschwingh.de).

Schwansbell Castle on the outskirts of Lünen is unique among the mansions of the Ruhr area. It was built in Wilhelmine times from 1872 as a moated castle in the English neo-Gothic style.

What is curious here is that the Gräfte - the moat - does not enclose the castle, but only a small garden island with a pavilion. In ancient times there was a small castle on the island, which could be where the moat was built.

Schwansbell has also experienced many uses: aristocratic residence, orphanage, pilot accommodation during the Second World War, later the seat of the municipal building department. Today there are apartments and offices here, and the neighboring servants' house houses the Lünen City Museum with a collection of toys and dolls. Circular paths lead through the castle park with its special tree species such as trumpet tree, Christ's thorn, robinia and tulip tree (luenen.de).

Germany's landscapes are full of ruins. Many of these are worth a visit. WELT gives seven tips for short trips to both beautiful and bizarre fragments in the north, south, east and west.

‹ ›
Keywords:
DeutschlandRuhrgebietNordrheinWestfalenRegionenporträtsBurgenLänderporträtsSchlösserRpblDuisburgSchloss SchwansbellEmscherA42LudwiggalerieBurg VondernDesignOberhausenLünenHerneSchloss BroichSchloss BodelschwinghMülheimWestfalenSchloss StrünkedeDortmund Wilhelminisch
Your comment has been forwarded to the administrator for approval.×
Warning! Will constitute a criminal offense, illegal, threatening, offensive, insulting and swearing, derogatory, defamatory, vulgar, pornographic, indecent, personality rights, damaging or similar nature in the nature of all kinds of financial content, legal, criminal and administrative responsibility for the content of the sender member / members are belong.
Related News