Alvaro Nadal says: "With Putin, we are witnessing something that we haven't seen in Europe since 1945>>

Almeria has been a prominent agent for business mobility in Andalusian communities and nationally since its inception. 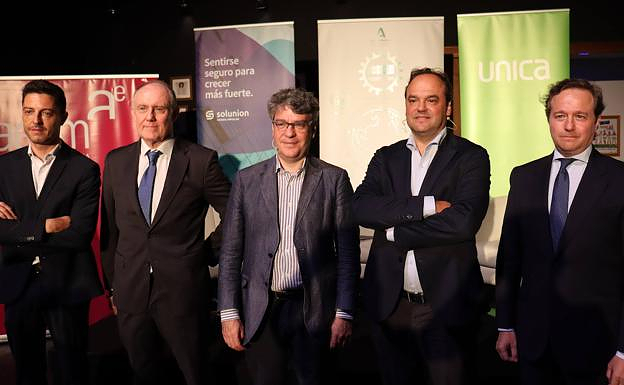 Almeria has been a prominent agent for business mobility in Andalusian communities and nationally since its inception. It is a province that has always been a proponent of exporting and has made its mark as the second largest in Andalusia in this area. This community, in turn, is second at the national level after Madrid.

The former Minister of Energy, Tourism and Digital Agenda and economist Alvaro Nádal announced this. He attended the Dialogues along with Jose Carlos Diez, an economist, author, professor at the University of Alcala, and a wide representation of the Almeria-based business community. For Development, an event that took place at the Cervantes theatre and where the latest economic news from both the country and around the world was presented. Enrique de los Rios, chair of the Foundation for Business Excellence, organized this event.

The international economic situation is quite unstable. Alvaro Nadal stated that the "international economic situation is not a little convulsive" and that it was coming from a context that had recovered after the pandemic in Ukraine. This has caused great instability in the economies. Nadal believes that the main problem is not due to the substantial rise in prices but because of inflation, which "is consolidating" and the central banks raising interest rates, as a result of the slowdown in world trade. On the plus side, there is a strong rebound in tourism this summer. He stressed that the important thing was to see this positive trend continue.

Not less important is Europe's energy crisis. Nadal highlighted that Spain has plenty of regasification capability and that energy cuts cannot be expected.

The former minister said that the Spanish economy is both bright and dark. He said that the latest employment data was "very good", but that inflation data is worse than in other countries. The national economy could be at risk from possible second-round effects. This means that once prices rise, everyone attempts to maintain their purchasing power. Workers raise wages, companies raise their prices, or the public sector goes into deficit. He concluded that Spain has a tendency to have this happen. Therefore, it is important that we maintain a certain level of social discipline so that everyone shares the cost.

Jose Carlos Diez spoke next. According to Jose Carlos Diez, the economist thought that short-term "we will have a very successful summer with hotels with high occupancy levels and music festivals across Spain." The problem comes in autumn. As Nadal has previously stated, this is due to the potential problems arising from the energy supply. Putin has already shut off gas supplies to the north, and Germany has declared an emergency 2 for energy. We are witnessing things we haven't seen since 1945 in Europe, said Diez. This shock can only be overcome by a cease-fire in war, as the gas cut will have an impact on not only the energy sector but also on the financial and economic sectors. He said that it was a complicated situation.

The Spanish economy is so affected by inflation that Diez stated that the monetary policy to be applied would include raising rates. However, it could not be too abrupt as it would lead to a debt crisis. We know that in order to combat inflation, we must have a neutral fiscal and monetary policy. However, it would cause us to increase our debt. He stated that we will have inflations higher than expected for a longer time.

The economist said that renewable energies are "the way out" in terms of renewable energy. Diez stated that we need to decrease our dependence on gas so that all the solar and wind power we develop in these years will be in our favor.

Almeria's economic strength is boosted by tourism and the agrifood sector

Nadal stated that Almeria has two vital sources of wealth. One is the agrifood sector with strong exports to countries like the United Kingdom and the other is the tourism sector with values that are comparable to levels before the pandemic. The former minister spoke in front of Almeria businessmen, "The important thing here is that the good data this summer is maintained next year."

He emphasized the importance of completing the Mediterranean Corridor quickly. This was a "key challenge" in current circumstances because it would lower transport costs, and help to cushion the shock the world economy is currently experiencing.

Diez also chose Almeria, praising the economic success of the province in recent years with its great growth in the agrifood sector. This sector is a growing one, with new developments and needs constantly being met. There will always be people to feed in countries that don't produce. Almeria is Europe's leader in producing BIO food, with an insatiable demand in countries like France and Germany. The economist explained that they are doing well, but have water problems.

The Cosentino business is another success story from the province. He pointed out that Cosentino is a perfect example of how the province has shown its ability to perform despite being in a difficult situation. "From a primary product like a stone quarry, an international brand has been established."

‹ ›
Keywords:
AlvaroNadalPutinAsistiendoVeiamosEuropa1945
Your comment has been forwarded to the administrator for approval.×
Warning! Will constitute a criminal offense, illegal, threatening, offensive, insulting and swearing, derogatory, defamatory, vulgar, pornographic, indecent, personality rights, damaging or similar nature in the nature of all kinds of financial content, legal, criminal and administrative responsibility for the content of the sender member / members are belong.
Related News