A GPS "pulls" a car and tourists down a Cazorla ravine.

Cazorla's local police had to rescue a car that was stranded in a ravine near the Santo Bastian hermitage. 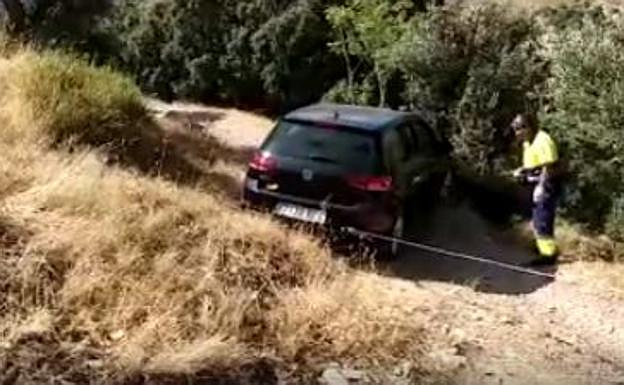 Cazorla's local police had to rescue a car that was stranded in a ravine near the Santo Bastian hermitage. Two tourists tried to reach a hotel by following the GPS directions, but ended up nearly falling off the cliff.

They had to stay the night at a Cazorla hotel until their vehicle was found by the Ermita De Santo Bastian Police.

Due to the terrain, rescue efforts on the vehicle required several hours.

The body thanks the agents and Gruas Lorente for their efforts in the difficult rescue.

"Please pay attention to the signs before following the GPS instructions," advises the Local Police.

‹ ›
Keywords:
TiraBarrancoCocheTuristasCazorla
Your comment has been forwarded to the administrator for approval.×
Warning! Will constitute a criminal offense, illegal, threatening, offensive, insulting and swearing, derogatory, defamatory, vulgar, pornographic, indecent, personality rights, damaging or similar nature in the nature of all kinds of financial content, legal, criminal and administrative responsibility for the content of the sender member / members are belong.
Related News