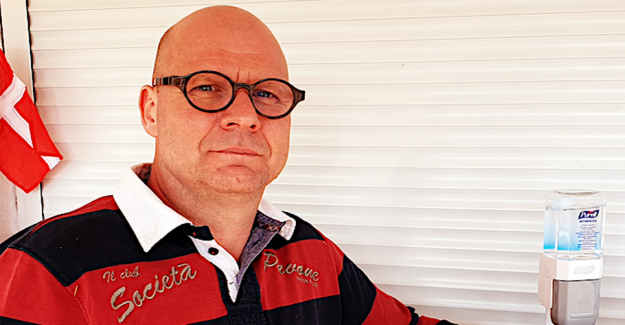 the Danish tourists ' lack of behaviour in the Danish amusement park has indeed given rise to the debate in the newspapers and on social media.

It is not only local citizens, who have noticed some of the danes ' lack of interest.

Ekstra Bladet has spoken with several actors in various professions within the tourism sector. They do not want to come forward with the name, because they will not harm their own forrretning. But more prefer in fact the germans rather than danes.

- It seems that the danes are frustrated that they are being forced into having a holiday in Denmark. The danes are just much more cumbersome and harder to make fit than the germans, tells a tenant of a reputable hotel in the area for Extra Magazine.

Allan Svendsen, who owns the Rømø Family Camping, coats his words with care, when he needs to describe the difference between Danish and German tourists.

- in General, the German tourists more positive than the danes, when they come on holiday. The danes are looking more often after the errors, so that they can get an economic compensation. The germans live more with the things as they are, says Allan Svendsen to Ekstra Bladet.

Danish tourists are made by local people over large parts of the country accused to be abusive, showing a lack of respect, and give fuckfingre, where they should instead poke your finger in the soil.

the Other day told the it consultant Claus Iversen from Christiansfeld, that he is considering to move to Germany, because he is tired of the rude Danish tourists, not least in the year has appeared in hobertal in the otherwise idyllic town.

- the Germans are far more polite and friendlier than the danes, said Claus Iversen to Ekstra Bladet.

It has also echoed that the citizens on the island of Fanø complain that they are being met with fuckfingre from the Danish tourists, because they have priority access to the ferry.

On the island of Bornholm complaints the locals that tourists, among other climbs around on listed buildings, in spite of friendly recommendations. And in Skagen have the local residents been plagued by the noise of loud music in the middle of the night, because Danish tourists have partied loose in the gardens and on the streets.

Than not, recommendations from the police are always been followed.

Allan Svendsen emphasises several times that of course there are plenty of polite and nice tourists from Denmark.

- But in general germans are just more polite and humble than the Danish tourists. They have more Polish. I know not really why, maybe it's cultural. Perhaps the more authority?

- I speak with many within the tourist industry, and here it is the clear perception that German tourists are much more positive and well-mannered.

Here at the campsite comes every year about 50,000 guests. Fortunately, the vast majority of both danes and germans - pleasing tourists. But there will always be some, as brands more than others and requires more. In general, it requires more to service a Danish tourist than a German.

On the island of Bornholm crawling tourists around Hammershus, which is grade ii listed.

According to Allan Svendsen, there is also a difference between the German tourists.

- Those from the north of Germany a bit more about the danes. Those who come from southern germany, is much more open, friendly and easier to laughter. They are easier to make happy. The same applies to German from the old East germany, says Allan Svendsen.

An employee of a major Danish agency that rents cottages to the germans and the danes, says, under promise of full anonymity:

the Danes on vacation in the south are accustomed to, that if they say 'jump', then jump people even more than they ask for. We do not in Denmark. This year, I will now say, that both the danes and the German is just strange all together. It is as if they have parked the brain at either the border or at the city limits.

the Problems with the both the many tourists and troublesome danes is something that in these weeks of being talked about everywhere in the tourist industry.

Not everything is idyllic in the Danish amusement park, although it immediately looks like this. Picture: Claus Bonnerup

- It is clearly something we talk about internally in the industry. We find that the danes will be offended over the smallest things.

They may not understand that they can't check-in at 12: 00, although it clearly states on our website that check-in can be done after 14.00.

The Danish tourists seem far more frustrated in years. They complain that there is no space in the restaurant, although they do not have reserved space. We have only the tables, which we have. Usually, many of the guests out into the city to eat.

But here everything is also recorded due to the increased turistpres. Then comes the guests back and scolds us out. We have crazy busy for the moment. All struggling to get things to slide, and then it's just hard to hear criticism from the danes all the time.

- the Germans, the swedes, the norwegians and the Dutch, on the other hand, never have trouble, tell hotelforpagteren of grænselands-hotel for an Extra Magazine.