LR Presidency: Éric Ciotti and Bruno Retailleau qualified for the second round

The Republicans have not yet decided on their new boss, but the choice is narrowing. 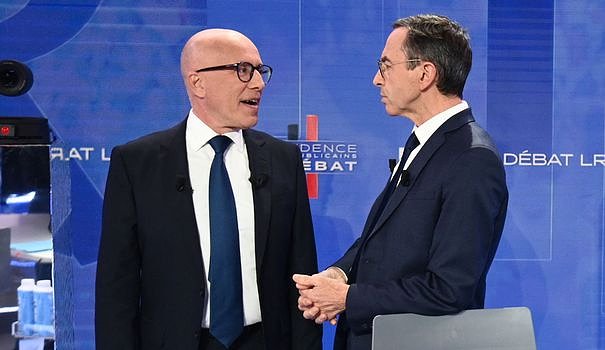 The Republicans have not yet decided on their new boss, but the choice is narrowing. Éric Ciotti and Bruno Retailleau have qualified for the second round next weekend and still hope to take the reins of a party in search of a new guideline. With 42.73% of the vote, the deputy of the Alpes-Maritimes is ahead of the senator of Vendée (34.45%). The third man, Aurélien Pradié, won 22.29% of the vote. He is eliminated.

Participation amounted to 72.67%. Since Saturday 6 p.m., the 91,110 members have voted electronically between these three shades of the right to find out who will become the new boss of the party, after the resignation of Christian Jacob in June - the interim has since been occupied by Annie Genevard .

Eric Ciotti, 57, finalist in the LR primary for the presidential election, was the first to launch on July 26. Under the slogan "Right to the heart", the boss of the Alpes-Maritimes federation, the largest in the country with almost 9,000 members, represents a line of security and identity, with the themes of order, authority as its compass. and freedom. Praising his loyalty to the RPR then to LR, he promises "shock therapy" for a right that "assumes itself" and "does not give in to political correctness". "We need less insecurity, less immigration and less taxes," he repeats.

He also pleads for a "tax shock" going towards a single income tax rate ("flat tax") and "savings on the social state". His muscular language appeals to the right of the South-East but worries among the elected LRs, who fear that his arrival will scare away the moderates. He can claim the support of the very popular Laurent Wauquiez, whom he intends to nominate presidential candidate for 2027, and says he is "serene" in the face of the investigation by the National Financial Prosecutor's Office opened into the jobs of his ex-wife.

For his part, the Vendéen Bruno Retailleau, boss of the LR senators, can boast of a long list of supporters, which for a time earned him the label of moderate, despite his positions. The elected official from the Movement for France of Philippe de Villiers hammered his intransigence on the sovereign during the campaign, and mocked in veiled words an agreement of his competitors after their joint meeting on Tuesday: "if we coalesce against me, it's good that I represent a danger".

The new president will have the heavy task of redressing the party, caught between Macronie and the National Rally. The right remains on the scathing failure of its presidential candidate Valérie Pécresse (4.8%). In addition, the new leader of LR will have to clarify the party line. Some elected officials are pushing to go further in the alliance with Emmanuel Macron, like the mayor of La Baule Franck Louvrier. He pleads for the party to establish a "government contract" with Emmanuel Macron, he said in an interview with the JDD.

On the contrary, others are anxious to mark their difference with the party and the allies of the Head of State. Guest of the Grand Jury LCI-Le Figaro-RTL, Gérard Larcher refuses, on the contrary, any idea of ​​alliance with the majority. According to President LR of the Senate, this would mean for his party to "disappear".