It's about threats and enemy lists, hate messages and smashed windows of private houses - and again and again about arson attacks on the cars of people who are active against right-wing extremism: In Berlin-Neukölln, neo-Nazis have created a climate of fear and uncertainty for years. 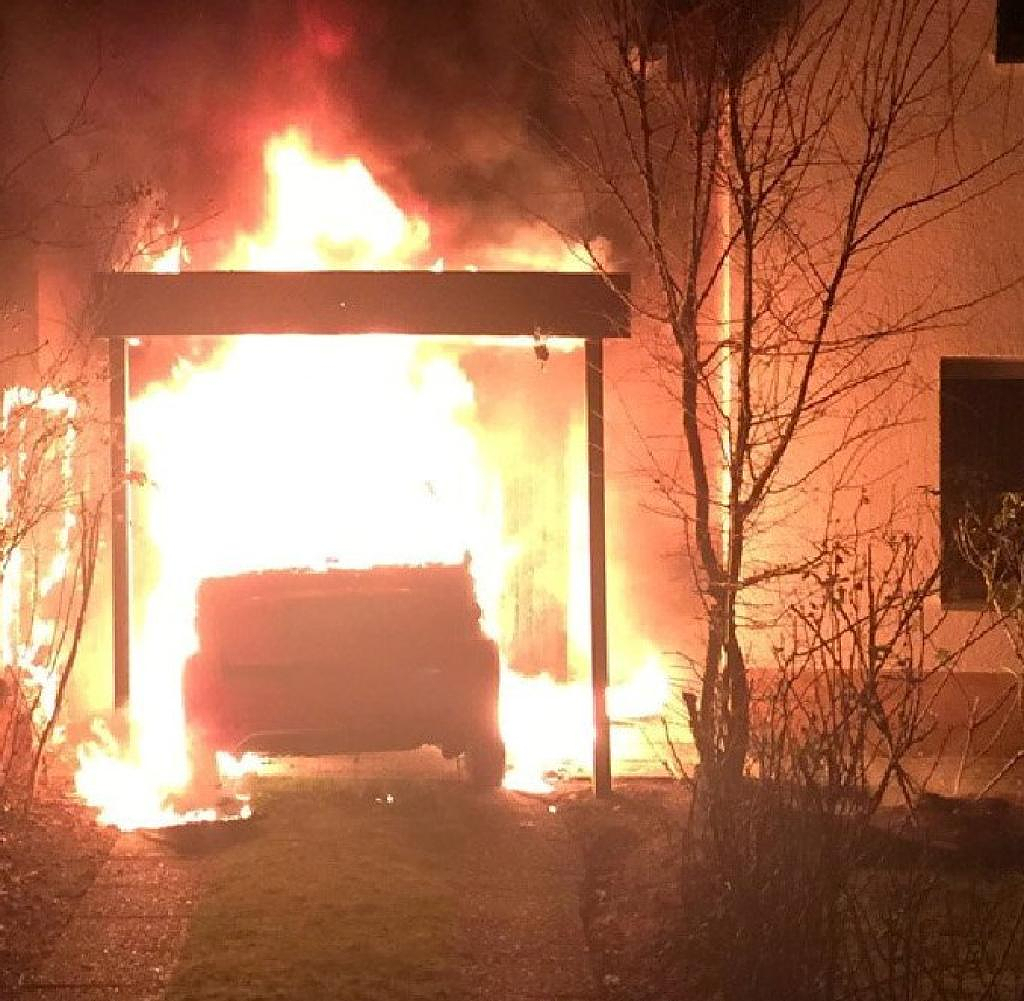 It's about threats and enemy lists, hate messages and smashed windows of private houses - and again and again about arson attacks on the cars of people who are active against right-wing extremism: In Berlin-Neukölln, neo-Nazis have created a climate of fear and uncertainty for years. The victims not only had to worry about their vehicles and house facades. They feared for their lives. During an arson attack in February 2018, the flames of a car that had been set on fire almost spread to the gas line of the residential building next door.

According to the police, the so-called "Neukölln attack series" includes more than 70 crimes that were committed between June 2016 and March 2019. In the capital, the series became a political issue. Because the investigators had a hard time clarifying the matter. They did identify the perpetrators, according to the tenor that could be heard from the police and public prosecutor's office for years. However, there was no evidence to bring charges, it said.

From Monday, the two alleged main perpetrators, neo-Nazis Sebastian T. and Tilo P., will have to answer in court. The capital's Attorney General's Office can claim this as a success. But the questions about the investigators' work will not go away. They might even get louder. Because research by WELT and RBB shows that the investigators could have clarified at least one of the now accused acts more than three years ago.

The crime involves a tangible threat: the perpetrators, presumably the accused neo-Nazi Sebastian T. and another right-wing extremist, daubed the doorbell of a man they disliked because of his political views on the night of March 15th to 16th, 2019 with the word "anti-driver's son". Apparently as an expression of their extreme right-wing sentiments, they also left a Celtic cross on the facade of the house.

What the perpetrators couldn't know: they were being filmed. Because one of the occupants of the house, namely the man whom the right-wing extremists denigrated as the “son of an anti-driver”, was himself the target of the police. The authority feared that the left-wing extremist with a criminal record could commit further crimes. The department responsible for combating left-wing extremism at the State Criminal Police Office (LKA) installed a camera in front of the apartment building to "defend danger".

What can be seen on the recording of that night was later recorded in a memo by the left-wing extremism fighters. The two men seen on the video tried to pry open the front door that night with an object about 40 centimeters long, albeit unsuccessfully. Then they inspected the doorbell. Then, at 2:13 a.m., one of the men pulled out a "cylindrical object," believed to be an aerosol paint can, the report said. A little later he sprayed the entrance panel, "obviously in a targeted manner on a small area".

What happened after the graffiti is likely to cause further discussion - possibly in the process starting Monday, but almost certainly in the parliamentary committee of inquiry into the complex of proceedings recently set up by the Berlin House of Representatives.

Because the police had justified the recording, which represented an encroachment on the right to informational self-determination, with reference to the Berlin Police Act with the need to avert an imminent danger. However, the officials did not seem to care too much about the material. According to the documents, the video was not viewed until around four months later.

The alleged perpetrators seen on the recording, Sebastian T. and another neo-Nazi, were initially not identified. Only a few days after the first viewing of the video, the left-wing extremism fighters informed their colleagues from the Office for Combating Right-Wing Extremism that unknown persons had apparently sprayed the Celtic cross symbol used by right-wing extremists on the facade of the house that night. But the right-wing extremism fighters did not use the evidence at first. Rather, they left it alone – and initially did not mention it at all in the investigation files.

The result: the graffiti initially remained unsolved and the chance of arresting the neo-Nazis passed. In April 2020, one of the investigators from the department for right-wing extremism wrote in a “final note”: “The process is being completed.” Further investigative approaches are “not recognizable”. The public prosecutor's office agreed with the police's view. In June 2020, she discontinued the proceedings. The responsible department head noted: "Perpetrator not identified".

The case seemed closed - and under normal circumstances the neo-Nazis would probably never have been held accountable for the graffiti.

The lawyers now responsible then looked for new investigative approaches and asked the police to turn over every stone again. And now, at last, around a year and a half after the March 2019 graffiti, the right-wing extremism investigators of the special commission "Focus" evaluated the video commissioned by their own colleagues from the department for combating left-wing extremism.

When viewing the recordings in December 2020, they probably couldn't believe their eyes. Because the images recorded in low light and at night were of modest quality. However, the right-wing extremism experts were certain that they saw old acquaintances on the video - including the main suspect of the "Neukölln attack series", the neo-Nazi Sebastian T. The officers who were familiar with the scene noted that they had identified the neo-Nazi on the recordings "without a doubt".

In the process that begins Monday, 36-year-old Sebastian T. has to answer not only for his alleged involvement in two arson attacks and the alleged fraud with Corona aid. The indictment also accuses him of being responsible for the "anti-driver's son" graffiti.

Investigators said only that the police, after examining it, could have initially come to the conclusion that the video taken to avert danger could not be used in court for the criminal investigations into the right-wing extremist graffiti. The police may not have informed the public prosecutor responsible at the time about the existence of the recordings.

It seems doubtful whether the members of the Berlin investigative committee will be satisfied with such justifications. "If the LKA does not evaluate the collected data for months and leaves important evidence in connection with the Neukölln attack series unused, one has to state: Apparently little was learned from the abuses that came to light after the terrorist attack on Breitscheidplatz," complains the member of the committee, Niklas Schrader (left).

The public prosecutor's office dropped the proceedings at the first attempt "for unknown reasons". "Those affected by the series of attacks were promised investigations with the highest priority," says Schrader. "They got sluggishness and inconsistency." The committee of inquiry will thoroughly examine the initially omitted evaluation of the video.

Bianca Klose, head of the state-funded "Mobile Advice Against Right-Wing Extremism", points out that the video on which the graffiti was documented was taken at the instigation of a police department to combat left-wing extremism. So it's not the result of targeted investigations into right-wing extremism, but a "random product," says Klose. That raises the question "about the proportionality of the use of resources by the Berlin police."

Klose has a suspicion. The investigating authorities might have withheld the video in order to be able to continue the intended information gathering in the left-wing scene. "If that turns out to be true, the protection of sources will once again be rated higher than the protection of potential victims," ​​says Klose. "It seems as if the main consequences of the NSU's series of murders were not drawn."

The alleged breakdown of the video, which was only evaluated with a delay, is one of a whole series of omissions. The most serious of these omissions relates to an attack on the car of left-wing politician Ferat Kocak in February 2018. Because the security authorities had previously found that the neo-Nazis who were now accused, Sebastian T. and Tilo P., had repeatedly spied on Kocak. Nevertheless, the authorities failed to warn the left-wing politician beforehand.

The Berlin Senate Department for the Interior had set up a commission of experts to evaluate the investigative work, which named numerous omissions in its final report. An internal police commission also listed omissions and errors.

The criminal trial, which begins on Monday, only deals with comparatively few acts that can be attributed to the Neukölln series of attacks. The public prosecutor's office accuses the neo-Nazis Sebastian T. (former NPD squad) and Tilo P. (formerly a member of the AfD) of setting fire to the car of left-wing politician Kocak and the vehicle of a bookseller. Sebastian T. is also accused of the graffiti documented on the police video with the insult "anti-driver's son" and three similar threats. In addition, the public prosecutor's office accuses the former NPD squad of fraud with corona aid.

Tilo P.'s defense attorney, the Berlin lawyer Mirko Röder, pointed out that the trial was not about clarifying all the acts of the so-called "Neukölln series of attacks". "I see numerous obstacles to a rule of law procedure," said Röder. The left-wing politician Kocak, who was injured in the arson attack on his car, could not be questioned because, as a member of parliament, he was also a member of the parliamentary investigative committee. His client, Tilo P., will initially not comment on the allegations, said Röder. Sebastian T.'s defense attorney, the lawyer Carsten Wardrobe, did not want to comment on the procedure when asked.

‹ ›
Keywords:
NeonazisErmittlungsverfahrenRechtsextremismusNeuköllnInvestigationTerrorismusBerlinPolizeiStaatsanwaltschaftCarsten SchrankMirko RöderBreitscheidplatzKrimiRBBLKAAuto
Your comment has been forwarded to the administrator for approval.×
Warning! Will constitute a criminal offense, illegal, threatening, offensive, insulting and swearing, derogatory, defamatory, vulgar, pornographic, indecent, personality rights, damaging or similar nature in the nature of all kinds of financial content, legal, criminal and administrative responsibility for the content of the sender member / members are belong.
Related News