Convention on climate change: EELV supports the all proposals as citizens, LR denounces an ecology punitive

The 150 citizens do not put everyone of agreement. The draw there is more than one year, to come out at the time of the crisis of the "yellow vests" and of th 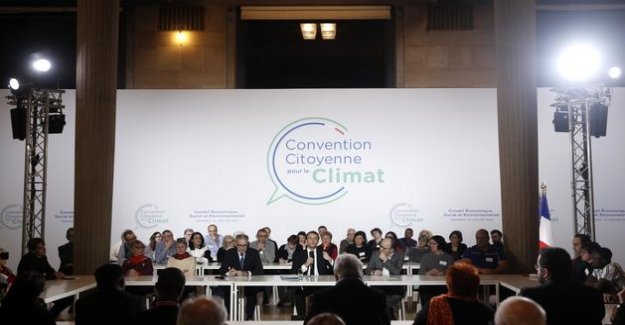 The 150 citizens do not put everyone of agreement. The draw there is more than one year, to come out at the time of the crisis of the "yellow vests" and of the great national debate, the members of the 'Convention' for the climate, have made this weekend than 150 proposals to the government, in view of a possible referendum. Some of the measures put on the table is already proving to clivantes, and divide the opposition. Among them : reducing the speed on motorways to 130 km/h to 110 km/h as early as 2021, or the energy renovation required of all housing units by 2040.

EELV supports the "all proposals"

Without surprise, Europe Ecology-The Greens said in a statement that "welcomed the commitment of the members of the 'Convention'", ensuring that the party supported "the proposals", "their ambition and their coherence". Only downside : "the absence of the carbon tax at the origin of the movement of the 'yellow vests', as well as the omission of nuclear power in the energy component". EELV "called" the government "to take hold globally in the extent to which it forms an inseparable whole". "The response should be to the height (of the issues)," warns the movement.

This position is far from being shared by The Republicans. Asked on BFMTV Sunday, Christian Jacob, the patron saint of the right, saw in these proposals for an "ecology punitive". "We're in a logic of decay, of constraints, of punishment", he lamented. "It is necessary to reconcile climate and economy, all on the principle of sustainable development. It is necessary to file the peace to the Constitution", he then claimed that 150 citizens want to amend the Constitution, adding that "the reconciliation of the rights, freedoms and principles do not compromise the preservation of the environment".

For its part, Marine Le Pen held Sunday on Twitter that the 'Convention' was "birth of the proposals, all the more zany one than the other, without consciousness of the economic realities and without any social relevance and ecological". "All that for this!" she deplored.