War in Ukraine: Thirteen civilians killed in Russian strikes in the Dnipropetrovsk region

Thirteen civilians were killed in the night from Tuesday to Wednesday in Russian bombardments in the Dnipropetrovsk region, in central-eastern Ukraine, announced the regional governor, Valentin Reznichenko. 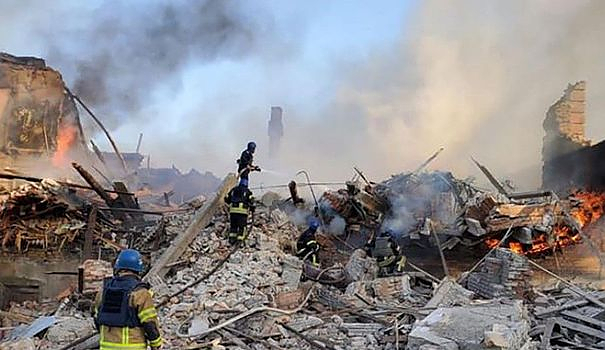 Thirteen civilians were killed in the night from Tuesday to Wednesday in Russian bombardments in the Dnipropetrovsk region, in central-eastern Ukraine, announced the regional governor, Valentin Reznichenko. In addition, explosions causing one death and injuries occurred on Tuesday, August 9, in an ammunition depot on the site of a military airfield on the Ukrainian peninsula of Crimea, annexed by Russia in 2014. In addition, Deliveries of Russian oil to three European countries - Hungary, Slovakia and the Czech Republic - via Ukraine have been halted after a bank transaction linked to sanctions targeting Moscow was refused.

Thirteen civilians were killed in the night from Tuesday to Wednesday in Russian bombardments in the Dnipropetrovsk region in central eastern Ukraine, according to regional governor Valentin Reznichenko. Two injured succumbed to their injuries, adding to the death toll of eleven announced by the official a few minutes earlier on Telegram. According to the latest report, the night attack also left 11 injured, five of them in serious condition, in this relatively safe region where civilians are evacuated from Donbass, further east, the epicenter of the Russian offensive.

"We had a horrible night (...) It's very hard to get the bodies out of the rubble," said Valentin Reznitchenko in his message: "I beg you, go to safe places during air alerts (. ..) Don't let the Russians kill you."

The town of Marganets, located on the other bank of the Dnipro river opposite the Ukrainian nuclear power plant of Zaporizhiia, and the village of Vychtchetarassivka were targeted in this attack with Grad multiple rocket launchers. "Eighty rockets were deliberately and insidiously launched at residential neighborhoods while people were sleeping in their homes," the governor said.

Russian forces, which are occupying the Ukrainian nuclear power plant in Zaporizhia, are preparing to connect it to Crimea, a peninsula annexed by Moscow in 2014, and are damaging it by carrying out this reorientation of electricity production, the Ukrainian operator warned on Tuesday. , Energyatom.

"The Russian military present in the Zaporizhia nuclear power plant are implementing the program of (the Russian operator) Rosatom aimed at connecting the plant to the Crimean electricity grids," Energoatom chairman Petro Kotin told television. Ukrainian. "To do this, you must first damage the power lines of the plant connected to the Ukrainian energy system. From August 7 to 9, the Russians have already damaged three power lines. At the moment, the plant is operating with only one line of production, which is an extremely dangerous way of working," he added.

Located near the city of Energodar on the Dnieper River, not far from the Ukrainian peninsula of Crimea (south), the largest power plant in Europe has 6 of the 15 Ukrainian reactors, capable of supplying four million homes. It came under the control of Russian troops on March 4, shortly after the start of the invasion of Ukraine, which began on February 24. Moscow and kyiv have accused each other since Friday August 5 of bombing it, without any independent source being able to confirm. Ukrainian President Volodymyr Zelensky raised the specter of the Chernobyl disaster.

Explosions that left one dead and injured occurred on Tuesday at an ammunition depot on the site of a military airfield on Ukraine's Crimean peninsula, annexed by Russia. The Russian army claimed that no shooting or bombardment had been the cause of these explosions, first reported by the authorities of this peninsula unilaterally attached to Russia in 2014 and on the front line in the Russian offensive against Ukraine launched on February 24.

"Several munitions intended for aviation exploded in a depot located on the territory of the Saki military airfield, near the town of Novofyodorovka," the Russian army said in a statement. Videos posted on social media showed a fireball forming after a loud blast, as thick billows of black smoke rose into the sky and panicked holidaymakers left the nearby beach.

Crimean leader Sergey Aksionov said one person was killed in the blasts and his health minister, Konstantin Skoroupsky, said five people were injured, including a child. "The tourists are not in danger. We ask you to keep calm," said a Russian deputy elected in this peninsula, Alexei Tcherniak. Despite the conflict, Crimea has remained an important vacation spot for many Russians who continue to enjoy summer on its shores.

Deliveries of Russian oil to three European countries - Hungary, Slovakia and the Czech Republic - via Ukraine have been halted after a sanctions-related bank transaction targeting Moscow was denied, the Russian oil company said on Tuesday. transportation of hydrocarbons. In a press release, Transneft explains that its payment for the right of transit through Ukraine for the month of August, made on July 22, was refused on July 28 because of the entry into force of certain sanctions against Moscow. . As a result, the Ukrainian company UkrTransNafta "stopped providing services for the transportation of oil through Ukrainian territory from August 4", Transneft said.

These are deliveries via a branch of the Druzhba pipeline, passing through Ukraine and serving three European countries without access to the sea: Hungary, Slovakia and the Czech Republic. Deliveries to Poland and Germany, via another branch of Druzhba transiting through Belarus, "continue as normal", Transneft said.

The United States announced on Tuesday that it would devote $89 million to help Ukraine destroy anti-personnel mines, which it said were voluntarily planted by Russian soldiers in populated areas in the north of the country before leaving. retire in March.

This envelope, which will be used to finance a hundred teams of deminers belonging to NGOs or specialized private companies, represents "emergency aid to Ukraine to get rid of anti-personnel mines and other explosive remnants of war ", told the press an official of the State Department, which funds this program.

Citing Ukrainian authorities, the US official said that when Russian forces withdrew from northern Ukraine, "they hid IEDs and pipe bombs in food storage areas, car trunks , washing machines, doorways, hospital beds and even in the bodies of the victims of the invasion".