War in Ukraine: kyiv claims new conquests in the east of the country

The war in Ukraine takes on another face. 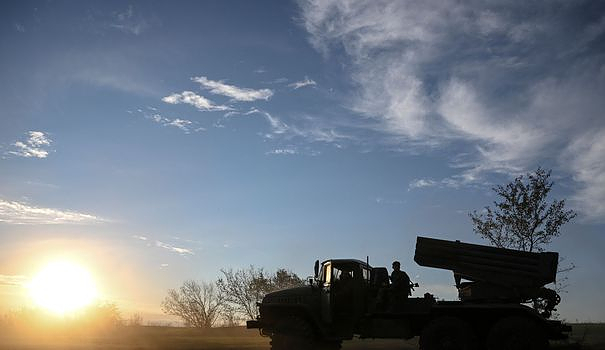 The war in Ukraine takes on another face. Russian annexation referendums began on Friday (September 23rd) in areas wholly or partly controlled by Moscow, Russian news agencies reported. These polls are described as "simulacra" or "parodies" by kyiv and the West.

Under the fire of international criticism, Russia also found itself in the dock in the Security Council. She was called to account for her invasion of Ukraine, the day after her announcement of the immediate mobilization of 300,000 reservists, accompanied by threats of recourse to nuclear weapons made by Vladimir Putin.

Ukraine announced on Friday that it had exhumed 436 bodies from a mass burial site in Izium, a town recaptured from the Russians in the northeast, including 30 with "signs of torture" such as tied hands, broken limbs or "amputated genitalia".

Several hundred graves surmounted by a cross and a mass grave were discovered in mid-September near the town of Izium, which was under Russian occupation for several months before being taken over by Ukrainian forces.

The capture of this locality on the eastern bank of the Oskil River seems to confirm the continuation of a counter-offensive which has already enabled kyiv to retake several thousand square kilometers in the neighboring region of Kharkiv. "The Ukrainians have also restored their control over positions south of Bakhmout", a key town in the Donetsk region targeted for weeks by Russian attacks, OleksiïGromov said.

Until now, the UN had spoken of suspicions of war crimes. But investigators from the organization concluded on Friday that such atrocities have indeed been committed in Ukraine since the Russian invasion at the end of February. The UN Commission of Inquiry on Ukraine was launched in March by the Human Rights Council (HRC), to investigate human rights abuses committed by Russian troops. In May, a new resolution asked the commission to investigate specifically serious violations committed in the regions of kyiv, Cherniguiv, Kharkiv and Sumy.

During the investigations in these territories, the commission visited 27 cities and localities and interviewed more than 150 victims and witnesses, explained its president, Erik Mose, during a first oral report before the Council. And, he said, "based on the evidence collected by the Commission, the Commission concluded that war crimes were committed in Ukraine", listing Russian bombings of civilian areas, numerous executions, torture and ill-treatment as well as sexual violence.

"We were struck by the large number of executions in the areas we visited. The Commission is currently investigating these deaths in 16 towns and locations. We have received credible allegations regarding many other cases of executions, which we are documenting," said Erik Mose. The bodies found have the common characteristics of having visible signs of executions, such as hands tied behind their backs, gunshot wounds to the head or slit throats.

These votes, which began at 7 a.m. (local time), must be held until September 27 in the pro-Russian separatist regions of Donetsk and Luhansk (east), and in areas under Russian occupation in the regions of Kherson and Zaporizhia ( south). Respectively 450 and 461 polling stations are open in the region of Donetsk and Luhansk, to the east. Zaporizhia has 394, and the Kherson region 198. Several polling stations have also opened in Russia to allow the vote of "refugees" who fled the fighting, according to Russian news agencies.

Ballots in the Kherson and Zaporizhia regions ask: "Are you in favor of secession from Ukraine, the formation of an independent state by the region and its joining the Russian Federation as a subject of the Russian Federation?" Residents of the pro-Russian separatist regions of Donetsk and Luhansk, which have already declared their "independence", must decide whether or not they want to be part of Russia. The electoral body of the Donetsk separatists also indicated that, "for security reasons", the ballot would be organized mainly door-to-door for four days. The polling stations will only open "on the last day" of the last day of the ballot, that is Tuesday, September 27.

If the result of these referendums is beyond doubt, they announce in any case an escalation of the conflict, Moscow going so far as to threaten nuclear strikes to defend what it considers to be "its" territory. "Holding this referendum is a historic step (...) We are going home!" Denis Pushilin, leader of the pro-Russian separatist region of Donetsk, said in a video posted this Friday morning on Telegram. These votes, on the model of the one which formalized the annexation of the Crimean peninsula (south) by Russia in 2014, have been the subject of preparations for several months. But the timetable seems to have accelerated with the Ukrainian counter-offensive which forced the Russian army to retreat in the northeast of the country.

Map of the Ukrainian territories where, from this Friday, September 23, referendums for annexation to Russia are organized.

The long-awaited face-off did not really take place: the foreign ministers of the UN Security Council demanded, on Thursday, that Vladimir Putin's Russia be held to account for its invasion of Ukraine , in front of their Russian counterpart Sergei Lavrov who generally snubbed them.

"I don't think anyone in the Security Council room, from Wang Yi (Chinese foreign minister) to Antony Blinken (his American counterpart), has spared Vladimir Putin or Lavrov the least bit," he said. commented a senior American official at the end of the meeting, on condition of anonymity.

Present in the room to deliver his speech, Sergueï Lavrov, with a closed face, did not attend the speeches of the other ministers: he gave up his place at the Council table to his deputy and left the room after his speech, confirmed by diplomatic sources. Convened by the French presidency of the Security Council, the meeting focused on the situation in Ukraine and the "impunity" for crimes committed since the invasion of the country by Russia.

"During the first day of partial mobilization, about 10,000 citizens arrived by themselves at the military police stations, without waiting for their summons", assured the Interfax agency Vladimir Tsimlianski, a spokesperson for the general staff. . Images posted on social networks claimed to show the mobilization in a locality of Yakutia, in Siberia, with men with closed faces embracing their loved ones, some in tears, before boarding a bus. In other frames posted by popular Telegram channel Mash, a line of men can be seen standing in front of a troop transport plane on a tarmac at night.

For its part, the Czech Republic will not issue humanitarian visas to Russians fleeing their country to avoid the mobilization announced by President Vladimir Putin, said the Minister of Foreign Affairs.

Ukrainian President Volodymyr Zelensky urged Russians on Thursday to "protest" against the mobilization on the Ukrainian front announced by the Kremlin or to "surrender" to the forces of kyiv. "55,000 Russian soldiers have been killed in this war in six months (...) Do you want more? No? So protest! Fight! Flee! Or surrender" to the Ukrainian army, he said. in Russian in its traditional video address. "These are your options to survive."

"You are already complicit in all the crimes (of the Russian army), murders and tortures of which the Ukrainians are victims. Because you are silent. Because you are still silent," accused Volodymyr Zelensky. He also said that the Russian authorities are preparing to mobilize "up to a million men". Officially, Moscow announced the day before the mobilization on Wednesday of 300,000 reservists.