The Ukrainian public operator of nuclear power plants Energoatom denounced Tuesday in a press release an "unprecedented" Russian cyberattack against its site, specifying that its operation had not been disrupted. 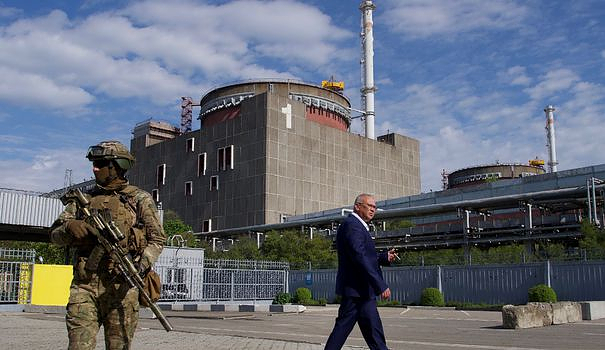 The Ukrainian public operator of nuclear power plants Energoatom denounced Tuesday in a press release an "unprecedented" Russian cyberattack against its site, specifying that its operation had not been disrupted. "On August 16, 2022, the most powerful cyberattack since the start of the Russian invasion took place against the official Energoatom website," the operator said on Telegram. The site “was attacked from Russian territory,” he added.

The Russian group "People's Cyber ​​Army" used 7.25 million internet robots which attacked the Energoatom site for three hours, assured the Ukrainian company, according to which this hacking attempt "did not have a considerable impact on the work of the Energoatom site".

The Telegram channel called "People's Cyber ​​Army" in Russian called on its supporters at midday to attack the Energoatom site. In the evening, she announced a "change", now designating as a target the Ukrainian Institute of National Remembrance, whose site was encountering difficulties.

These attacks come amid tension around the Ukrainian nuclear power plant in Zaporijjia, located in the south of the country and occupied by Russian troops since March, shortly after Moscow launched the invasion of its neighbor. Several strikes of which Moscow and kyiv accuse each other have targeted this installation, the largest in Europe, raising fears of a nuclear disaster.

French President Emmanuel Macron and Indian Prime Minister Narendra Modi agreed on Tuesday to "work together to bring the conflict to an end" in Ukraine, the Elysee Palace said in a statement. The two leaders spoke by telephone about "the war led by Russia in Ukraine and its destabilizing consequences for the rest of the world", according to the French presidency.

Emmanuel Macron, who received the Indian Prime Minister in May in Paris, underlined France's "determination to continue its support for Ukraine". India has refrained from openly condemning the Russian invasion of Ukraine, and from joining in the votes to that effect at the UN. In June, she nevertheless co-signed a G7 declaration pledging to "respect the territorial integrity and sovereignty of other States".

Emmanuel Macron also called on Tuesday for the withdrawal of Russian forces from the Zaporijjia nuclear power plant in southern Ukraine, stressing the "risks" that their presence poses to the security of the site. In a telephone interview, this time with his Ukrainian counterpart Volodymyr Zelensky, he expressed "his concern about the threat posed by the presence, the actions of the Russian armed forces and the context of war with the ongoing conflicts on the safety and security of Ukrainian nuclear facilities, and called for the withdrawal of these forces," the Elysee said.

Emmanuel Macron also "expressed his support" for the proposal of the director general of the International Atomic Energy Agency (IAEA), Rafael Grossi, to send a mission on site "as soon as possible" to inspect the site. The two heads of state "exchanged on the modalities of such a mission", specified the French presidency. Emmanuel Macron has "regular exchanges" with the director of the IAEA on this mission for which he pleads "since the first alerts", specified his entourage. "We have been working for months with our partners in favor of this mission", added the same source.

Russia has accused the UN services of having prevented the IAEA mission. Ukraine, for its part, opposed it, considering that it would legitimize the Russian occupation of the site in the eyes of the international community.

UN Secretary General Antonio Guterres will travel to Ukraine on Thursday August 18 where he will take part in a meeting with the Ukrainian and Turkish presidents, in particular to discuss the export of cereals from Ukrainian ports, his spokesman announced on Tuesday. .

"At the invitation of President Volodymyr Zelensky, the Secretary General will be in Lviv on Thursday to participate in a trilateral meeting with Turkish President Recep Tayyip Erdogan and the Ukrainian leader," said Stéphane Dujarric during a press briefing, specifying that Antonio Guterres would then travel to Odessa and then to Turkey. The meeting will "examine" the implementation of the international agreement signed in Istanbul in July to allow grain exports from Ukraine, an agreement "of which Turkey is a key element", he added. .

Imprisoned Russian opponent Alexei Navalny on Tuesday denounced the lack of systematic Western sanctions against Russian oligarchs for their support for Vladimir Putin's regime and his military intervention in Ukraine.

In a message full of examples published on his social networks, he says that only 46 of the 200 richest Russians, according to the ranking of Forbes magazine, are currently subject to American, European or British sanctions. "To me it doesn't really look like an all-out war against Putin's oligarchs," he commented.

According to him, among others, the CEO of the Russian giant Gazprom Alexei Miller is still not targeted by European sanctions, while the famous oligarch Roman Abramovich still escapes US sanctions.