The best motorhomes and campers to get away this summer

Motorhomes and camper vans are in fashion. 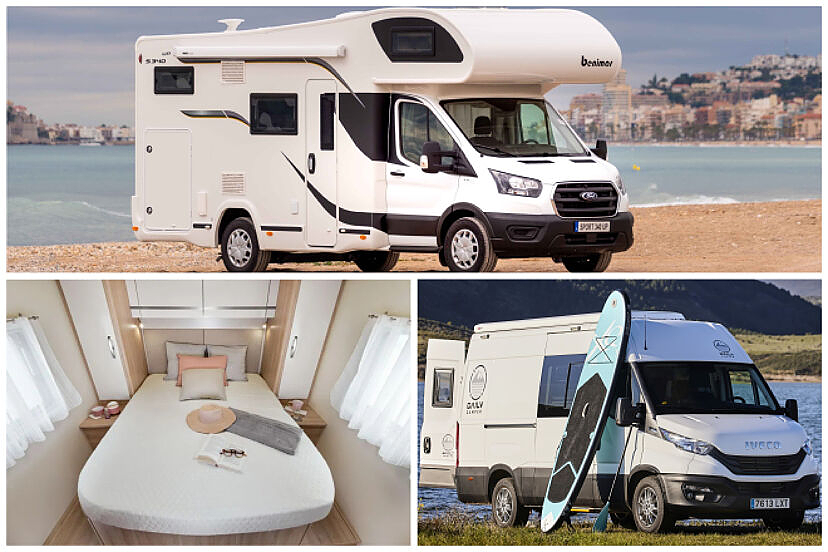 Motorhomes and camper vans are in fashion. This summer more than half a million people will choose this type of vehicle to go on vacation in Spain, of which almost 350,000 will be foreign tourists and will spend an average of 17 days to visit our country between July and September, according to forecasts by the Spanish Association of the Caravaning Industry and Commerce (Aseicar).

In 2021, almost 9,000 motorhomes and camper vans were registered in Spain, a market that continues to grow despite the component crisis that is delaying the delivery of orders, which is why many customers turn to the second-hand market, which last year past it reached 20,000 sales.

The lack of vehicles also affects motorhome rental companies, which are having serious difficulties getting new units for the upcoming summer holidays. The fleet of residential vehicles in Spain is 332,200 vehicles according to data from the Spanish Association of Caravanning Industry and Commerce (Aseicar), of which 234,000 (more than 70%) are caravans and 25% are motorhomes. The rental fleet is 9,000 vehicles and they are highly sought after. This explains why the average rental price exceeds 150 euros per day in high season.

We have selected some of the most popular motorhomes and camper vehicles in Spain. Some cost more than 80,000 euros, but there are also those for less than 50,000 like the Iveco Daily Camper.

The Benimar Tessoro 463 was the best-selling motorhome in Spain in 2020, according to DGT registration data. It measures 7.4 meters long, 2.3 wide and 2.9 high, and is powered by a 2.0-liter Ford engine that develops 170 hp associated with a 9-speed automatic gearbox. It is approved for up to five people to travel and sleep.

The McLouis Menfys 3 was the best-selling camper van in Spain in 2020, according to data from the DGT. It measures almost 6 meters long and is approved for four seats in circulation, although it only has one bed for two people (in the Maxi version there are two beds and four people can sleep). It uses the chassis of a Fiat Ducato and is powered by a 120 hp 2.2-litre diesel engine.

The Adria Twin is another of the most popular camper vans in Spain. It is available in two different versions (600 and 640) with different lengths (6 meters or 6.4). Both are approved for four seats in circulation, but in the smallest there is only one bed for two people (four in the largest). Converted from a Fiat Ducato, it is powered by a 140 hp 2.3-litre diesel engine with a 9-speed automatic transmission.

It was the third best-selling camper van in Spain in 2020, according to data from the DGT. It measures almost 6.4 meters long, 2.05 wide and 2.65 high, and is approved for four seats in circulation and two for sleeping (three as an option). It is equipped with convertible twin beds, a premium folding table and a modular bathroom to travel in total comfort. Its heart is the Fiat diesel engine of 2.2 liters and 140 hp with a 6-speed manual gearbox.

It was the second best-selling motorhome in Spain in 2020, according to data from the DGT, and is approved for five seats in circulation with comprehensive equipment (including a large 140-liter refrigerator and a bathroom with a separate shower). It measures 7.4 meters long, 2.3 wide and 2.9 high. It is powered by a Ford 2.0-litre 130PS diesel engine with a 6-speed manual transmission.

The Benimar Tessoro 440 UP is one of the most popular and economical motorhomes on the market (from 60,000 euros). It belongs to the group of profiled or semi-integral motorhomes, which are characterized by a more aerodynamic design, and measure 6.3 meters long, 2.3 meters wide and almost 3 meters high. It is approved for 4 seats in circulation and has two beds (a height-adjustable rear bed and another with an electric roof) to sleep three or four people. In addition, it has a panoramic skylight, a 140-litre refrigerator with a separate drawer for 9 1.5-litre bottles, an adjustable garage with two doors and a bathroom with a separate shower and window. The engine is a Ford diesel of 2.0 liters and 130 hp with a 6-speed manual transmission.

The Giottiline Siena 390 (previously called Pla Siena 390) is a motorhome 7.4 meters long, 2.3 meters wide and 2.99 meters high with capacity for four people (five as an option) and a large central bed that can be easily access in the back room. The new model is equipped with a monobloc fiberglass front roof, white upholstery, a new cooktop with a separate glass top, a separating door for the day/night area and a garage with a capacity of up to 300 kg. It is converted on the frame of a Citroën Jumper or a Fiat Ducato and mounts a 2.2-liter diesel engine with 140 hp and a 6-speed manual gearbox.

The Benimar Sport 340 UP is a capuchin motorhome (with large interior space) approved for 5 seats in circulation and 5 fixed places to sleep. It measures 6.8 meters long, 2.3 wide and 3.08 high, and is equipped with a height-adjustable rear bed (manual), an electric suspended ceiling bed for one person (max. 150 kg), a 140 liter refrigerator with separate bottle drawer, adjustable garage with two doors and bathroom with separate shower. It is powered by a powerful 160PS 2.0-litre Ford diesel engine with a 6-speed manual transmission.

The Carado CV601 is a camper van built on the chassis of a Fiat Ducato with a 120 hp 2.2 liter Multijet engine. It measures 6 meters long, 2.05 wide and 2.7 high with an interior height of 1.9 meters. It is approved for four seats in circulation and four places to sleep (five as an option). In addition, it is equipped with a two-burner gas stove, refrigerator, worktop, bathroom with sink and shower area.

The Challenger 260 is a 6.99 meter profiled motorhome that is characterized by its 160 cm wide suspended bed. It is approved for four seats in circulation and four places to sleep, with a living room, kitchen and bathroom. It is available in three different trim levels (Start Edition, Graphite Edition Vip and Graphite Edition Premium) and prices range from 60,990 euros for the access version with a 140 hp engine and 6-speed manual transmission to 68,390 euros for the more luxurious version with 170 hp engine and 9-speed automatic gearbox.

The Volkswagen California is the queen of camper vans and is the best-selling model in its category in Spain in 2022, according to data from the DGT. It measures 4.90 meters long, 1.90 wide and 1.99 high, and has capacity for four people thanks to its two double beds (one above the trunk and the rear seats, and another on the lifting roof). It is available in three trim levels (Beach Tour, Beach Camper and Ocean) and offers two 150 hp or 198 hp 2.0 TDI engines with a 7-speed DSG automatic gearbox (both engines with 4Motion drive option). It can be purchased from 60,480 euros.

The Iveco Daily Camper is one of the latest developments in the maxi camper van segment. It is 6 meters long and offers a capacity of 12 cubic meters with an interior height of 1.9 meters, although there is also an approved version with 2.1 meters of interior height and 18 cubic meters of volume. It has a wide sliding door on the right side (with a new gutter), rear step and rear doors with 270º opening. The side windows are now sliding (previously hinged) and have a blind and a mosquito net. New, higher quality Dometic skylights and a dimmer regulator for exterior lights have also been incorporated. It is powered by a 2.3-litre diesel engine that offers 156 hp and a maximum torque of 380 Nm, associated with an 8-speed HI-MATIC automatic gearbox. It is one of the cheapest camper vehicles in its category and is available in Spain from 48,000 euros.

The Citroën Jumper Celebration 600, developed in collaboration with Clever Vans, is a 6-meter-long camper van that houses everything you need for a comfortable trip, from heating, hot water, a 193x140 cm double rear bed, oak-colored furniture, swivel and height-adjustable seats, bathroom with shower, sink and toilet, kitchen with two hotplates, sink and 80-litre fridge with five-star freezer. It has the benefits of the BlueHDi 140 engine with a 6-speed manual gearbox.

By inheriting the main characteristics of the Peugeot Traveller, its camper version is also one of the few vehicles in its category capable of entering a garage or underground car park (1.98 meters high with the pop-up roof folded). The raised roof, however, is one of the highest on the market, with interior measurements from 2.40 m at the front, which allows you to stand up comfortably. It has a wardrobe, a 40-litre fridge, a pull-out kitchen module, water tanks in a jug format that can be filled from any fountain or tap, and even an outdoor shower. It is offered with the 120, 150 and 180 hp Blue HDi diesel engines.