Generalife Theater </p> Patricia Guerrero, Granada, 1990, is a dancer who has, despite her youth and ability to create. 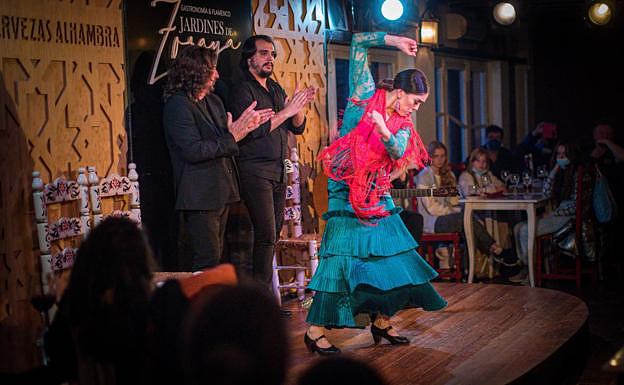 Patricia Guerrero, Granada, 1990, is a dancer who has, despite her youth and ability to create. Her National Dance Award, which she received in September, not only recognizes but also encourages this gift. Her new show Deliranza was premiered at the Mont-de-Marsan Flambco Art Festival (France) a few weeks back. It has given her the opportunity to take on new choreographic challenges and travel through new scenic and sound worlds. Patricia Guerrero's creative torrent is a union of two concepts: dance and delirium to allow the spectator to participate in the evolution her concerns and her experiences in a show in which the most dreamlike subconscious pushes boundaries of tradition and the canonical travels for new territory. Review of Alice's story through the characters and works that inspired her, such as ’Beauty’ by William Wordsworth, Peter Handke, or ‘La Duration’ by Magritte. These characters, in the words the bailaora, "they have been the driving force behind an original piece of surrealism rhythm and beauty."

Patricia Guerrero is a creative tandem with Juan Dolores Caballero El Chino, and she takes over the direction of a large dance corps consisting of seven performers. The music was led by Dani de Moron on guitar with the voices and vocals of El Colorao. Oscar Alvarez plays the keyboards and Agustin Diassera percussion.

The Apache group, led by Luis Miguel Pelaez, has been performing live since its inception. Its concerts have featured a variety of recordings, including some of the greatest pop-rock songs of all time. This isn't the first time Apache acts have performed in Pradollano. It did so in tandem with the Festival in 2015, 2016, and 2017. The band, which is well-known for its extensive repertoire of covers from all periods of Spanish music, returns to Pradollano. They will perform in open air, away from the heat and humidity of the capital. In collaboration with Cetursa Sierra Nevada, and sponsored by Cervezas Alhambra, a high-altitude concert at the Sierra Nevada heights. Plaza de Andalucia, 9:30 p.m.

The 1922 Cante Jondo Contest left us a legacy. This concert, which celebrates its centenary, showcases current flamenco and gives space to all generations. Cristo Heredia and Tomas Garcia are among the performers. Marian Fernandez, Marian Fernandez, and Aroa Palamo, on cante, will be joined by Alvaro Martinete and Jose Fermin Fernandez on guitar. Sponsored By Sabor Granada. La Chumbera Municipal Auditorium, 9:00 p.m.

At 9:00 p.m., the Jose Tamayo Theater presents the Gorgoritos show. It features music, art, and education for children aged 2-8 years.

Adriana Torres (voice and direction) and three musicians will take you on a journey through musical impressionism under the title "The colors of music: A family trip through musical imitism". She explores the effects of light, color, chromaticism and emotional sensations as well as musical sounds. These are the most iconic pieces of impressionism that have been reinterpreted and transformed to guide you on a journey in which color is the main character.

‹ ›
Keywords:
AgendaFestivalGranadaViernesJulio
Your comment has been forwarded to the administrator for approval.×
Warning! Will constitute a criminal offense, illegal, threatening, offensive, insulting and swearing, derogatory, defamatory, vulgar, pornographic, indecent, personality rights, damaging or similar nature in the nature of all kinds of financial content, legal, criminal and administrative responsibility for the content of the sender member / members are belong.
Related News