With this sponsorship, the group will reinforce its level of positioning and notoriety with greater activation. 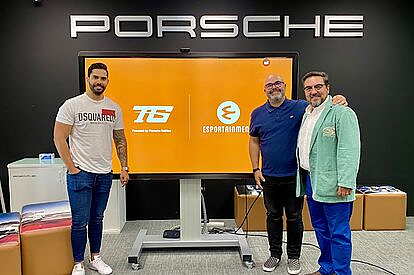 With this sponsorship, the group will reinforce its level of positioning and notoriety with greater activation.

TDG Racing Team and Esportainment, the new global brand of GES, have reached an agreement whereby the manager of entertainment activities and eSports business will sponsor the Porsche Ibérica official team. This alliance, beyond enhancing the visibility and positioning of both brands, will mean a strategic reinforcement of actions, communication and experiences towards fans, entities and the ecosystem. Esportainment, in its new corporate and activity development in esports entertainment and business, has opted for TDG Racing Team Powered by Porsche Ibérica to carry out its activity diversification.

This alliance will bring with it not only the notoriety of the brands themselves, but also a strategic development of the team, in the short and medium term, at the level of marketing and activation aimed at fans, companies and endemic and non-endemic agents of the sector, with activations of great generation of content, in addition to face-to-face events.

Porsche Ibérica's commitment to esports is clear and since 2019 it has been present in the ecosystem providing content, participating in all the activities organized by GES and joining the competition in its most natural form, simracing. Thus TDG Racing Team, its official team, is present at the Porsche SuperCup (iRacing) with the outstanding participation and success of its driver Borja Zazo, Mundo GT (Gran Turismo 7) and the Virtual Endurance Challenge (Gran Turismo 7) where they have harvested both outstanding victories and first positions.

The leadership of TDG Racing Team in the networks is absolute at the level of simracing, both in the generation of content and in the progressive increase in the fan base of its followers.

‹ ›
Keywords:
DirectivosdeportenegocioDirectivosDeportes
Your comment has been forwarded to the administrator for approval.×
Warning! Will constitute a criminal offense, illegal, threatening, offensive, insulting and swearing, derogatory, defamatory, vulgar, pornographic, indecent, personality rights, damaging or similar nature in the nature of all kinds of financial content, legal, criminal and administrative responsibility for the content of the sender member / members are belong.
Related News