"Actions in Defense are of the utmost importance and must be discussed in the Government, with social agents and with the opposition," he defended. 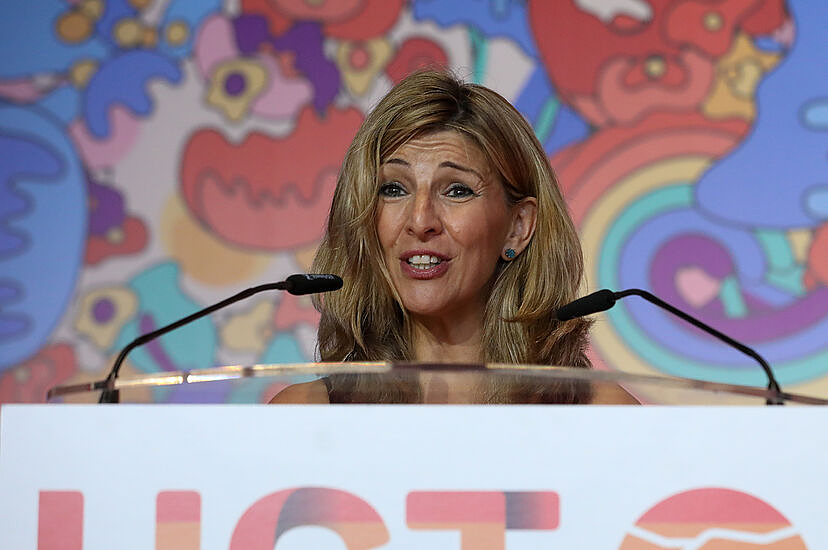 "Actions in Defense are of the utmost importance and must be discussed in the Government, with social agents and with the opposition," he defended.

The second vice president and minister of Labor and Social Economy, Yolanda Díaz, has requested this Tuesday the "urgent" call for the monitoring table of the coalition government pact due to the "concern" generated by the investment of 1,000 million euros in the Ministry of Defence.

This has been stated in statements to the media at the inauguration of the first LGTBI state meeting organized by the UGT union, in which it has also stated that important debates such as the budget "have to be carried out within the government coalition and dealt with with the rest of the political forces".

"Defense actions are of the utmost importance and must be debated in the Government, with social agents and with the opposition, which, although they do not think the same as us, have the democratic right to express their opinion", he continued.

In addition, he has exposed the need for the Government to work and explain to the opposition groups its approaches in matters such as foreign policy and defense.

Díaz has insisted that these 1,000 million euros "do not go to Navantia, but for current spending and investment in weapons supplies for our troops."

Regarding the increase to 2 percent of the GDP of the Defense budget, which the Government plans to reach in 2029, the second vice president has stressed that it would mean increasing it almost to the level of the Ministry of Labor, which is 30,000 million euros.

For this reason, he has called for a "calm" debate on investment in Defense, also because "inflation is out of control and people are suffering" and, given that, "measures must be taken."

"I do nothing but sew this coalition. We have to take care of it so that it can continue transforming our country, so it's worth making a stop along the way and discussing it," he said.

On the other hand, Díaz has said that it is necessary "to continue raising the minimum interprofessional salary" to mitigate the impact that inflation is having, especially on the lowest salaries and in the face of "the bosses' blockade" to negotiate salary increases with the unions. .

The minister stated that, "before we go on vacation, we are going to convene the commission of experts on the interprofessional minimum wage", while adding that "I have a pending conversation with the social agents".

The general secretary of the UGT, Pepe Álvarez, has considered it necessary to review the SMI without waiting for 2023, something that the law allows in cases of very high inflation.

Given the refusal of the CEOE to sit down to negotiate salary increases, "we are not going to leave people who do not have a salary of 1,000 euros without their increase," Álvarez stressed.

For the minister, this request "has enormous common sense" and also responds to requests from international organizations not to moderate wages to avoid the risk of late payment in the EU.