Which autonomies will pull the car of economic growth in 2023?

Spain is a country of contrasts, socially and culturally, but also economically, where not all the cogs in the GDP machine advance (or contract) at the same speed. 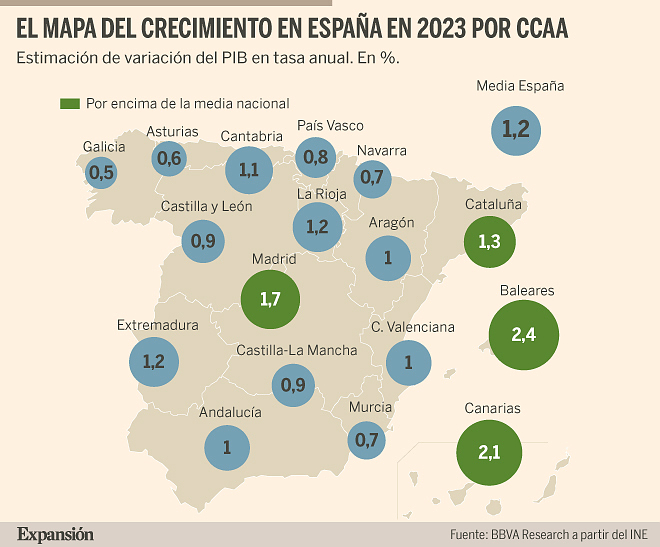 Spain is a country of contrasts, socially and culturally, but also economically, where not all the cogs in the GDP machine advance (or contract) at the same speed. Thus, although the Spanish economy will continue to grow in 2023 at rates close to 1%, managing to avoid the miura of the recession according to the forecasts of the main national and international organizations, the autonomous communities face next year with very different perspectives, although all of them in the context of a sharp slowdown in activity and a cloudy horizon due to the entrenchment of the war in Ukraine; the energy crisis; the still high inflationary pressures, and the ECB interest rate hikes to combat them.

In this scenario, in which no one knows where the end of the new tunnel is, BBVA Research predicts that all Spanish regions will grow in 2023, although they will do so at very different speeds. The entity, which recently adjusted its GDP forecast for the whole of Spain next year slightly upwards to 1.2% in the face of greater-than-expected economic resistance, has done the same with its predictions for the autonomous communities, whose GDP will grow in a wide range that fluctuates between 0.5% in Galicia and 2.4% in the Balearic Islands.

Precisely, it will be the tourist communities, along with Madrid and Catalonia, the two largest regional economies in the country, that will pull the growth car in 2023. In fact, only four autonomies (Balearic Islands, Canary Islands, Madrid and Catalonia) will grow next year. it is above the national average (1.2%), maintaining the traction capacity of the Spanish economy in a year that is expected to be full of bumps, especially in its first half.

According to BBVA Research projections, the Balearic Islands will lead growth in 2023 with a 2.4% increase in GDP, although far from the 9.9% with which it could end this year; followed by the Canary Islands, with an increase of 2.1%, also well below the 10.3% expected for 2022, an exercise that has been the true resurrection of the tourism sector after the journey through the Covid desert. In fact, the tourist figures of both communities had already been above pre-pandemic levels in the first semester, and this is reflected in their GDP.

In the third quarter of this year, the Balearic Islands economy grew by 0.5% quarterly and 8.4% year-on-year, more than double the national average (3.8%), according to the estimate made at the time by the Airef on the composition of GDP by region from the first advance of data from the INE. Canarias is in second place, with a quarterly increase of 0.4% and 6.8% year-on-year; followed by Catalonia, with an increase of 0.3% quarter-on-quarter and 4.9% year-on-year.

In the Airef estimate, subject to adjustments after the quarterly GDP review by the INE (from 0.2% to 0.1%), Madrid appears below the national average, with a year-on-year increase of 3.6%, a figure that contrasts with the 4.7% advanced at the beginning of December by the Community of Madrid itself based on its regional accounting.

In any case, the 2022 snapshot anticipates the direction that the regional economies may take in 2023, when the outlook shows more clouds than clear due to the loss of steam in private consumption and the foreseeable drop in foreign demand, especially European, due to the cooling of the economy, but even so the tourist fuel will be enough not only to keep alive the flame of growth in the Balearic and Canary Islands, but to revalidate its leadership on the weakened GDP podium.

The third community that will grow the most will be Madrid, with a rise in GDP of 1.7%. The region will not be immune to the sting of private consumption in a context in which high prices and more expensive financing have curtailed the purchasing power of families, nor to the foreseeable decline in foreign tourism, but the diversification of its economy and its ability to attract and retain investment make it one of the most resilient. In fact, BBVA Research forecasts that Madrid will lead growth in 2024, with a GDP growth of 3.8%; closely followed by Navarra (3.7%), Catalonia and La Rioja (3.6% both).

But although a complex start to 2023 is expected, with the Spanish economy immersed in "considerable weakness", as the Bank of Spain warned last Tuesday, economists trust a gradual improvement in the scenario as the year progresses. A turn in which the autonomies with the most weight in the industry in their GDP will gradually take over from the tourist regions; that is, the Basque Country, Navarra and Galicia, together with other northern regions, including Catalonia.

These autonomous communities will gain traction as European demand soars, uncertainty clears up and bottlenecks in supply chains are mitigated. Precisely, BBVA Research forecasts that the vast majority of regional GDPs will grow above 3% next year, with only two exceptions: the Canary Islands and the Balearic Islands, which could limit their growth to 2.9% and 2.8% respectively. It is part of this transfer of the baton to the "communities that produce investment goods and automobiles, oriented towards exports to Europe and capable of taking greater advantage of the impulse of the NGEU funds", points out BBVA, which adds that these CCAAs will be those that, especially in 2024, "will show the greatest accelerations".