The impression that tax fraud is a common practice in Spain has become so strong among citizens that nine out of ten consider it to be a widespread and widespread problem. 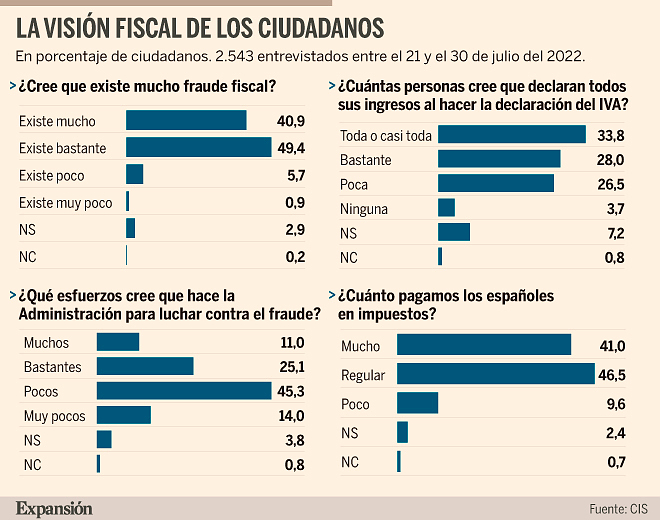 The impression that tax fraud is a common practice in Spain has become so strong among citizens that nine out of ten consider it to be a widespread and widespread problem. Specifically, 49% of Spaniards believe that there is "a lot" of tax fraud in our country and 40.9% that there is "quite a lot", adding up to 90.3%, which contrasts with the meager 6.6% who consider that in Spain "little" (5.7%) or "very little (0.9%) are disappointed.

This is reflected in the latest survey of Public Opinion and Fiscal Policy by the Center for Sociological Research (CIS), published yesterday. So deep is this impression that 67% of those surveyed agree with the statement that "if people no longer deceive the Treasury, it is for fear of a review", and 50% with the idea that "almost all the world cheats something when paying its taxes, and the Administration already counts on it".

This perception, which with some upward or downward variations is repeated in the surveys, is in line with the fact that Spain is one of the European countries with the largest volume of shadow economy. The Treasury technicians' union, Gestha, estimated at the beginning of the year that the weight of the opaque economy, the one that bypasses the Treasury and Social Security, was around 20% of GDP (around 240,000 million euros) "compared to, for example, 12% and 11% in France and Germany". A scourge that drains enormous resources from the system, erodes the competitiveness of companies that do comply, and contributes to increasing job insecurity.

Despite this apparent conviction of the public that there is a serious tax fraud problem in Spain and that, paradoxically, 93% of Spaniards see themselves as quite or very conscientious and responsible when it comes to fulfilling their obligations with the Treasury (in other words, the one who defrauds is the neighbor), a large majority considers that the public powers do not do enough to correct it.

In fact, more than 59% think that the Administration makes few or very few efforts to fight against tax fraud. This is a slightly lower percentage than a year ago (61%), which shows that Spaniards do not appreciate significant results in the anti-fraud plans deployed by the Government of Pedro Sánchez.

In addition, although the proportion of Spaniards who consider that they pay a lot of taxes has dropped by five points compared to the survey of a year ago, it is still high: 41%, compared to 9.6% who believe that they pay little (the majority, 46.5% think they pay "regular"). This decline occurs in a context of kicks forward in the Government's announced tax reform, which threatens to bring with it a general increase in taxes, and that the Covid crisis, first, and the invasion of Ukraine, later, has been postponing . Although it takes place shortly after the Executive announced new taxes on banks and energy companies to combat the effects of inflation.

Despite the fact that 59.4% believe that "taxes are necessary so that the State can provide public services", a percentage very similar to that of a year ago, the majority of citizens continue to consider that efficient and effective use is not made of of those resources. In fact, 55.7% believe that society benefits little or nothing from what is paid to public administrations in taxes and contributions, a much higher percentage than the 41.2% of those who believe they benefit a lot or quite a bit. Moreover, 62% consider that they receive less than they should for their tax effort, compared to the scarce 6.6% who think that they obtain more than what they pay, or 28.7% who consider that there is a fair exchange; that is, you get "more or less what you pay for."

In addition, a large majority, 79.9%, believes that taxes are not collected fairly; that is, those who have more do not pay more. Precisely, one of the great leitmotifs of Sánchez's economic rhetoric is the need to move towards a system based on fiscal justice, arguing that "there is no social justice if there is no fiscal justice and fair and progressive taxes are fundamental to maintain public services.

Regarding the collection system, the Spanish do not hide their preference for direct taxes over indirect ones. Specifically, 64.8% believe that taxes should be collected above all through direct taxes, such as personal income tax, according to the income or wealth of people and companies, in contrast to 23.5% who bet on indirect taxes, such as VAT, which are levied on consumer goods and services and which affect everyone equally.

‹ ›
Keywords:
EconomíaReforma Fiscal
Your comment has been forwarded to the administrator for approval.×
Warning! Will constitute a criminal offense, illegal, threatening, offensive, insulting and swearing, derogatory, defamatory, vulgar, pornographic, indecent, personality rights, damaging or similar nature in the nature of all kinds of financial content, legal, criminal and administrative responsibility for the content of the sender member / members are belong.
Related News 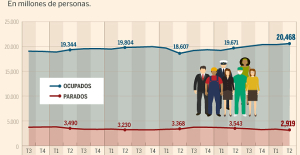