Air Force One: this is Joe Biden's presidential plane that lands today in Madrid

This Tuesday one of the two presidential planes of the United States Air Force lands at the Torrejón Air Base, with the capacity to resist a nuclear attack, refuel in mid-flight and function as a military command center in the event of an attack on the Casa White. 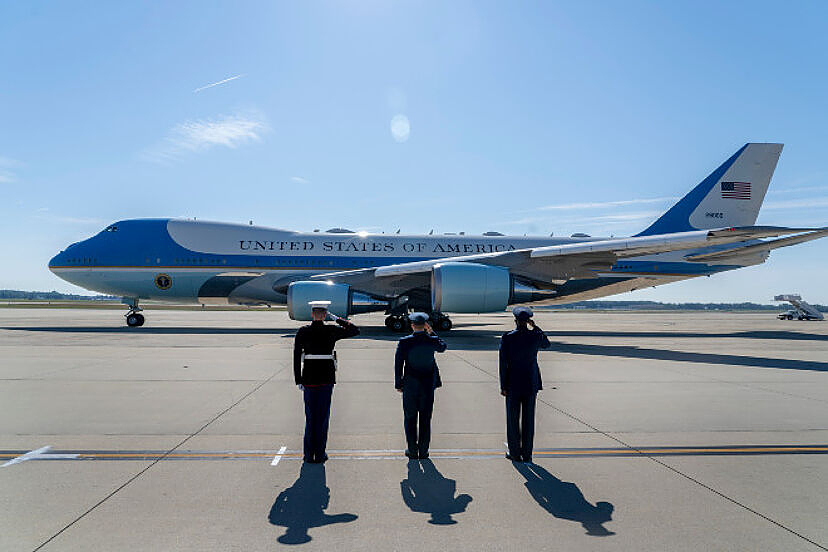 This Tuesday one of the two presidential planes of the United States Air Force lands at the Torrejón Air Base, with the capacity to resist a nuclear attack, refuel in mid-flight and function as a military command center in the event of an attack on the Casa White.

In 1997 we learned about the impressive plane of the President of the United States thanks to 'Air Force One', the fast-paced film directed by Wolfgang Petersen and starring Harrison Ford, Gary Oldman and Glenn Close. The plane that inspired the feature film, which was a box office success with two Oscar nominations and is considered one of the most popular action films of the 90s, is still the same one that has operated since 1990 (there are actually two) and this Tuesday he lands at the Torrejón Air Base for Joe Biden to participate in the NATO Summit being held in Madrid.

The plane chosen to transport the president of the United States is a Boeing 747-200B that is more than 70 meters long, 19 meters wide and has a wingspan of almost 60 meters (from one end of the wings to the other). The US Air Force has two practically identical aircraft that, at first glance, only differ in the numbers on their tails (28000 and 29000).

Each of these aircraft can fly 7,800 miles (about 12,600 kilometers) without refueling, although they have the ability to refuel in mid-flight and therefore unlimited range. In addition, they have the capacity to transport 100 people (of which 70 are passengers) and are the only 747 in the world that carry four cabin crew (pilot, co-pilot, command chief and radar chief).

Air Force One can only use this callsign to communicate with air traffic control when carrying the President of the United States. It is powered by four General Electric-manufactured engines that produce 250 kilonewtons (kN) each, reach a top speed of 1,037 km/h, and fly at an altitude of 45,100 feet (about 13,700 meters).

Thanks to the modern technological means it uses and the extensive aerial security shield that surrounds the presidential plane (it is normally escorted by two F-16 fighter jets), Air Force One has the capacity to function as a mobile command center in case there is an attack on the United States. The electronic equipment is protected against electromagnetic impulses in the event of a nuclear attack and the plane has advanced secure communications.

But perhaps what's most surprising about Air Force One is the comfortable sleeping quarters and impressive medical facilities it houses. There is a doctor on board on every flight, who has at his disposal a complete operating room with an operating table, emergency medical supplies and a well-stocked pharmacy. In addition, there are separate rooms for guests, collaborators of the president, secret service personnel and the media. The President's Suite includes a private dressing room, a small gym, bathroom, showers, a large office, and a conference room. In total, 372 square meters of space spread over three levels.

As a curiosity, the White House signed a contract with the Boeing company in January 2018 worth 24 million dollars to renovate two Air Force One refrigerators that had become outdated. The website Defense One noted in an article that the new refrigerators were expected to have a capacity of 1,982 liters to store up to 3,000 food rations in the cellar.

The current Boeing 747-200Bs will be replaced by two new modified 747-8s that, as Donald Trump denounced in 2016 (a few months before becoming president), will cost "more than 4,000 million dollars". The United States Government Accountability Office denied this and estimated the total cost of the new presidential planes at 3.2 billion. The first should be delivered in 2024 and the second the following year. The current ones have been in service for three decades.

‹ ›
Keywords:
EconomíaJoe BidenOTAN
Your comment has been forwarded to the administrator for approval.×
Warning! Will constitute a criminal offense, illegal, threatening, offensive, insulting and swearing, derogatory, defamatory, vulgar, pornographic, indecent, personality rights, damaging or similar nature in the nature of all kinds of financial content, legal, criminal and administrative responsibility for the content of the sender member / members are belong.
Related News