“Zero Covid” in China: how the police are erasing the “white paper” revolution

“All my conversations about the protests have been deleted from my WeChat account [the main Chinese social network], notes, amazed, a Pekingese who participated, Sunday, November 27, in a rally in the capital against the government’s “zero Covid” policy. 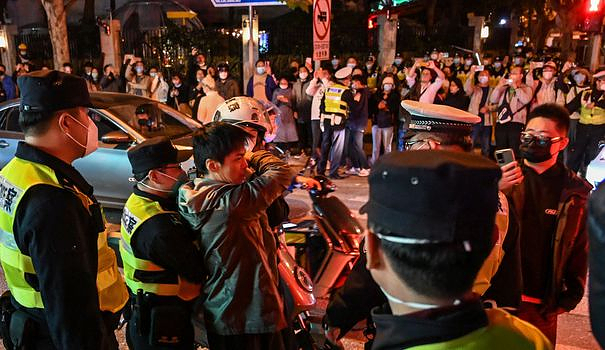 “All my conversations about the protests have been deleted from my WeChat account [the main Chinese social network], notes, amazed, a Pekingese who participated, Sunday, November 27, in a rally in the capital against the government’s “zero Covid” policy. I knew that our conversations and our posts were monitored and that posts could be censored, but I did not imagine that it was possible to delete our private messages remotely!

A few days after an unprecedented protest movement that has spread to several major cities in China, the Chinese security apparatus has regained control. The authorities have cleared the way both in the streets - where police patrols are omnipresent - and on social networks. In the metro, agents go so far as to check cell phones to remove photos and videos of the demonstrations and to check that applications banned in China, such as Telegram or Instagram, have not been installed. They also hunt for VPNs, software used to circumvent Internet censorship.

For the time being, only a few arrests have been visible, at the very scene of the protests. But it is highly likely that the communist regime will act discreetly to find, arrest and punish the ringleaders, as it did after the massive protest movement in Hong Kong in 2019.

China can count on its arsenal of technological surveillance tools for this. "I was contacted by about 15 people who were summoned by the local police, confides Wang Shengsheng, a lawyer from Shenzhen who offers free legal advice to demonstrators. They say they have received calls from police officers claiming to know where they are. found during the protests and asking them to come forward for questioning." And to add: "I suspect the police are using data from mobile phones and social media accounts to track protesters. In some cities, it seems that they relied on surveillance images and on the recognition facial." It must be said that China is massively squared: according to a report by the consulting firm IHS Markit, it had 540 million video surveillance cameras last year, or 54% of the world total.

"The Chinese have long known that they are being tracked by the most sophisticated electronic surveillance system in the world. The coronavirus crisis has brought some of this technology out of the shadows, providing authorities with justification for radical methods of digital social control," says Josh Chin, author of the book Surveillance State, who expects elements of the Covid-19 control system - like tracking QR codes linked to health apps - to be future permanently integrated into the police system. Some companies specializing in artificial intelligence and security cameras even claim to be able to recognize masked faces and alert the authorities.

"Since Xi Jinping came to power a decade ago, the government's use of technology to improve its governance and surveillance capabilities has become increasingly widespread," said Claire Seungeun Lee, a law professor at the University of Massachusetts (United States) In addition, all new technological applications such as ordering an Uber-type ride-hailing vehicle (Didi in China), online purchase of a train ticket or products on The Internet offers the Chinese state very powerful monitoring tools." The Covid epidemic has further accelerated the phenomenon. "Power is taking advantage of this crisis. It's a very good pretext to control the entire population - the obsession of the regime. And to know everything about us: to collect our personal data, to know exactly the places we frequent..." , sighs a Pekingese, exasperated by the decline in freedoms. “China is using digitalization to achieve a perfect dictatorship,” summarizes sinologist Jean-Pierre Cabestan from Hong Kong. Protesters who have dared to challenge President Xi Jinping in recent weeks could soon pay the price.