"Pakistan and other developing countries are paying a horrible price for the intransigence of the big emitters, who continue to bet on fossil fuels", argued Antonio Guterres in a tweet, before traveling to flooded regions of the country. 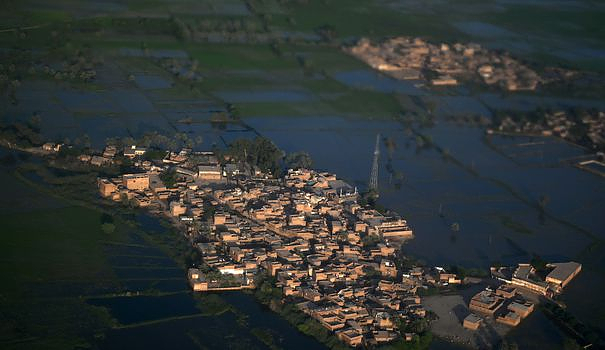 "Pakistan and other developing countries are paying a horrible price for the intransigence of the big emitters, who continue to bet on fossil fuels", argued Antonio Guterres in a tweet, before traveling to flooded regions of the country. South.

"From Islamabad, I make a global call: stop this madness. Invest in renewable energy now. End the war on nature," he said.

Nearly 1,400 people have died since June in these floods. Having increased in intensity due to global warming, these are caused by torrential monsoon rains and have covered a third of Pakistan - an area the size of the United Kingdom - destroying homes, businesses, roads, bridges and agricultural crops.

Guterres hopes his visit will encourage the international community to financially support the country, which estimates it needs at least $10 billion to repair and rebuild damaged or destroyed infrastructure. A sum impossible to collect alone for Pakistan, because of its high debt.

The monsoon, which usually lasts from June to September, is essential for the irrigation of plantations and the replenishment of water resources in the Indian subcontinent. But Pakistan had not seen such heavy rains for at least three decades.

On Friday, Mr. Guterres had already been indignant at the indifference of the world, in particular of the most industrialized countries, in the face of climate change.

"It's madness, it's a collective suicide," he noted.

Pakistan is responsible for less than 1% of global greenhouse gas emissions (for 3% of the world's population), but it is in 8th position of the countries most threatened by extreme weather phenomena, according to a study by the Germanwatch NGO.

This year, the country has already been confronted with a heat wave that has sometimes exceeded 50°C, devastating forest fires and devastating floods caused by the rapid melting of glaciers.

Some 33 million people have been affected by the floods, leaving them homeless and unable to meet their basic needs. Around 500 bridges collapsed.

Antonio Guterres is due to visit the millennial city of Mohenjo Daro on Saturday, listed as a UNESCO World Heritage Site and threatened by the waves.

"If he comes to see us, Allah will bless him," Rozina Solangi, a 30-year-old housewife from a flooded village near Sukkur, told AFP on Friday.

"All the children, the men, the women are roasting in this scorching heat. We have nothing to eat, no roof over our heads. He must do something for the poor," she added.

Pakistan has received five times more rainfall this year than usual, according to the meteorological service. Padidan, a small town in Sindh province, has been covered in more than 1.8 meters of water since the monsoon began in June.

These bad weather caused flash floods in rivers in the mountainous north, which washed away roads, bridges and buildings in minutes, and a slow accumulation of water in the plains of the south which submerged hundreds of thousands of square kilometers of land. .

Hundreds of makeshift camps have sprung up in the rare areas that are still dry in the south and west of the country. Raised roads or railways are often the last places where water has not crept in.

With people piled on top of each other, accompanied by their livestock, epidemics are to be feared. Many cases of dengue, a disease spread by mosquitoes, and scabies have already been identified.