Dense dark smoke had filled the attic, the emergency services could not see their hands in front of their eyes. 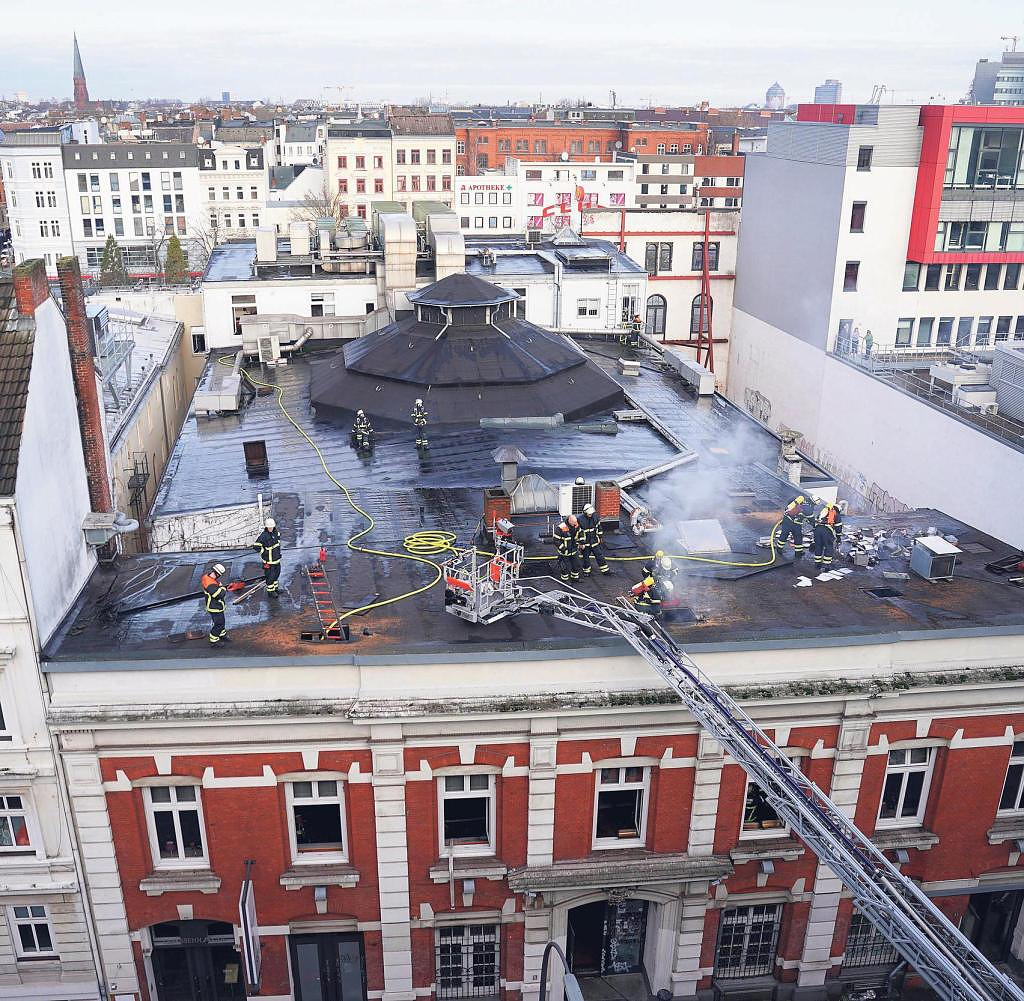 Dense dark smoke had filled the attic, the emergency services could not see their hands in front of their eyes. But they could smell the smoke - even through the respirators they wore. They felt their way forward, “on all fours”, as they say. Packed with 40 kilograms of equipment, they worked their way through a labyrinth of mountains of files and boxes - full of Christmas decorations, as was to be shown later. It took the firefighters a full ten minutes to work their way to the fire. Then they crouch in front of a nearly 15 meter long and more than man-high wall of files that the fire had taken.

The fire brigade needed more than five hours on Tuesday morning to extinguish the fire in "Schmidts Tivoli". It is now clear: the musical theater only narrowly avoided a catastrophe. Because smoke gases were massively compressed in the burning attic, the emergency services feared that ignition could occur, in which case the smoke gases would ignite explosively. But the fire brigade managed to save the theater – with unconventional means. WELT spoke to the firefighters from the city center fire station on Admiralty Street about the operation.

The "Schmidts Tivoli" is living neighborhood history. The music theater is one of the most important cultural addresses along Spielbudenplatz and has a long history. The Gründerzeit building originally housed an amusement theater in the style of a beer garden, still without a roof. That was added later, according to the website. From 1925 the "Zillertal" was here, a temple of entertainment. In 1991 the house was taken over by the theater makers Corny Littmann and Norbert Aust and one of “the most beautiful theaters in Hamburg” was uncovered and restored. In September of the same year, the "Schmidts Tivoli" started.

However, the historical character of the theater building was a special challenge for the fire department. The interior with its additions and extensions is nested in a confusing manner. The top floor runs the entire length of the building, is in the middle, directly above the auditorium, but is only a meter high. The roof, which is supported by solid wooden beams, has no windows or ventilation flaps - the building is a listed building.

A narrow staircase hidden behind a narrow wooden door leads to the first floor. "We're lucky that the fire broke out in the morning," says Dirk Flocke, the operational service. He's the overall operations manager on Tuesday. "Had it happened during the night, the fire would probably have been discovered far too late."

So some employees were already in the house. “It was a technician who was then able to show us which is the right door. Otherwise we probably wouldn't have found them so quickly," says Oliver Warnecke, who led the operation inside the theatre. The 53-year-old was responsible for the so-called attack squad, the two firefighters who had to approach the fire first.

When they opened the door to the stairwell, they were under a wall of black smoke. Then they worked their way up. Only the thermal imaging camera, which led them in the direction of the heat source, provided orientation. They had twenty minutes, that's how long the oxygen from the breathing air bottles lasted. Then the next two colleagues went in. In total, more than 50 firefighters were deployed at the theater.

The heat was enormous, "huge" says Ramon Pratsch, the train driver and thus the manager at the scene. And the fire smoke changed. By the time firefighters arrived, thick black smoke was billowing from the roof. A little later it turned brown-yellowish. The fire brigade feared the smoke gas ignition.

"As a firefighter, you learn to read the smoke from the fire," says Pratsch. He didn't like what he saw at Spielbudenplatz. In the event of a fire, the theater would probably have been beyond saving. In addition, the emergency services deployed in the attic would also have been in acute danger.

It was Bennet Brumm, train driver in training, who ran with Pratsch that day, who then had the idea of ​​ripping open the roof in several places. An idea not without risk, after all, the oxygen flowing into the attic could have fanned the fire even more. But the maneuver worked.

Smoke gases and the water vapor from the extinguishing water slowly escaped. "The roof opening was the existential point," sums up B- Dienst Flocke. "You can't work through an operation like that in school." Putting out fires always requires a certain talent for improvisation.

While the roof was being opened with chainsaws, other firefighters in the theater's catering area were busy stopping the extinguishing water. It streamed through the wooden floorboards and down the power and lamp cords to the ground floor. The emergency services used large gastro trays from the kitchen to collect the water and sucked it off with so-called water vacuum cleaners, a type of vacuum cleaner for water.

"We were very lucky," says Tessa Aust, Managing Director of Schmidts Tivoli. Theater operations hardly had to be restricted. Only one afternoon performance had to be postponed. The follow-up to the fire is still ongoing. "No great assets were destroyed."

The holes cut in the roof by the fire brigade were closed by a roofer on the same day. An appraiser will now assess what damage has occurred in the attic and on the roof. "We would like to thank the fire brigade colleagues for their prudent efforts," said Aust. "You did a great job."

‹ ›
Keywords:
HamburgFeuerwehrWeibliche FeuerwehrleuteFeuerwehrleuteAustNorbert (Schmidts Tivoli)Schmidts Tivoli (Hamburg)TexttospeechSchmidt TivoliMusiktheaterZillertalAdmiralitätstraßeSpielbudenplatzBrandrauchDachöffnungKarriere
Your comment has been forwarded to the administrator for approval.×
Warning! Will constitute a criminal offense, illegal, threatening, offensive, insulting and swearing, derogatory, defamatory, vulgar, pornographic, indecent, personality rights, damaging or similar nature in the nature of all kinds of financial content, legal, criminal and administrative responsibility for the content of the sender member / members are belong.
Related News