Where the Zoigl flows - a bike tour in the Upper Palatinate

It is naturally cloudy, unpasteurized, bottom-fermented and extremely tasty: the Zoigl - a beer that is brewed jointly in the Upper Palatinate in particular and has been an intangible cultural heritage according to the Unesco standard since 2018. 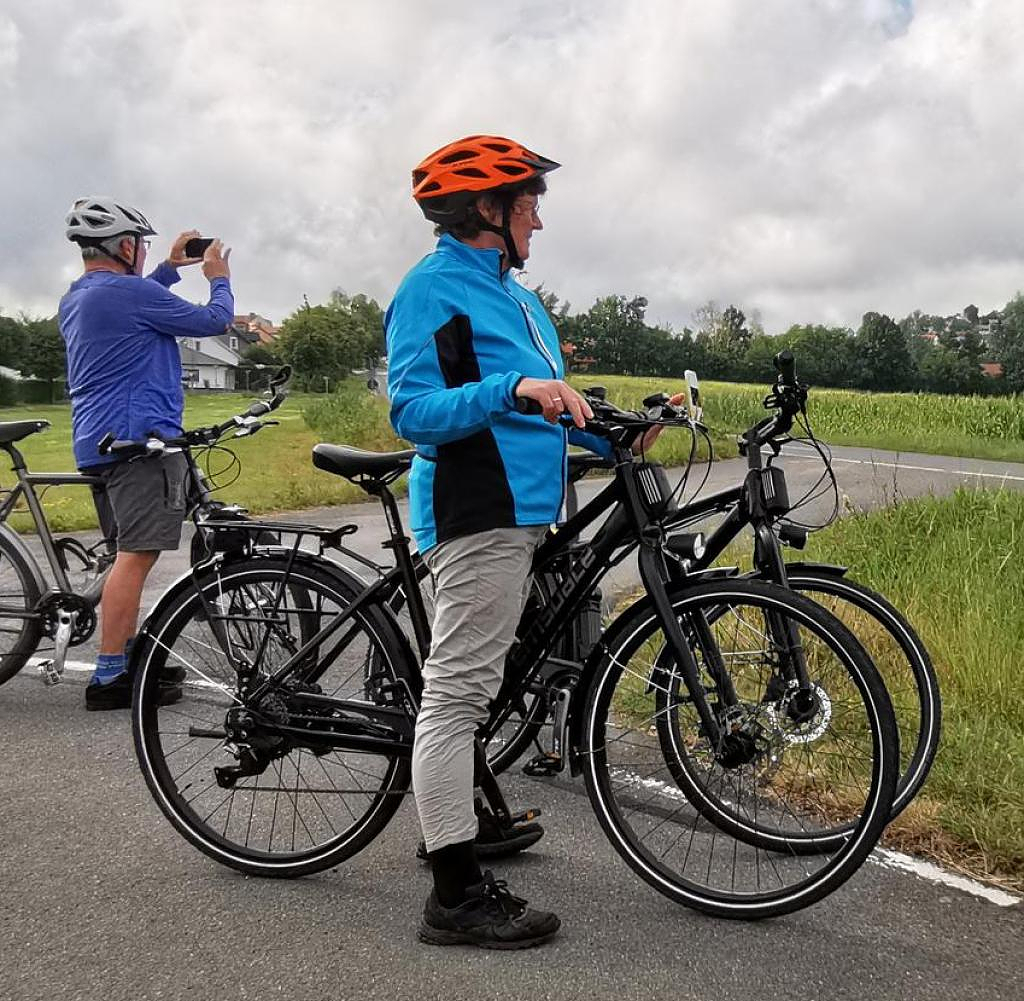 It is naturally cloudy, unpasteurized, bottom-fermented and extremely tasty: the Zoigl - a beer that is brewed jointly in the Upper Palatinate in particular and has been an intangible cultural heritage according to the Unesco standard since 2018. Yes, it's called the Zoigl, connoisseurs know the right article. And there are more and more connoisseurs of the Zoigl.

Until the 1980s, however, the Zoigl culture was very local. Guests sat with the respective brewer in the kitchen, there was often freshly slaughtered beer with whatever was in the fridge. Neuhaus and Windischeschenbach in the Upper Palatinate are considered the home of the Zoigl. As early as the 15th century, deserving community members were granted the right to brew beer here. It was tied to the house and property and was inherited with them. However, it was not brewed at home, but in the so-called communal brewery.

Home brewers bring their ingredients and their special recipe here to this day; the municipal master brewer brews the Zoigl from it in the open brewing kettle, which is then filled into barrels and stored for several weeks in the house of the person authorized to brew.

When the beer is ready, the traditional Zoigl star is hung on the house, indicating that beer is served here in a rustic ambience while stocks last. It consists of two triangles pushed into each other and is similar to the Star of David, but has no historical connection to Judaism.

In the meantime, however, the local special beer is only rarely served in the home, but in special guest rooms and in many restaurants. The Zoigl culture has become a trademark of the Upper Palatinate.

Which is why there is now even an explicit "Zoigl cycle path" that connects the Zoigl strongholds of Windischeschenbach, Neuhaus, Falkenberg and Mitterteich. Since the bike tour is a good 92 kilometers long and there are plenty of altitude meters to be overcome, cyclists should not look too deep into the Zoigl glass on the way.

Windischeschenbach, the ideal starting point, lies in a depression. From here it first goes steeply up and then further into the narrow, enchanted Waldnaabtal. If elves were standing by the wayside here, you wouldn't be surprised. The Waldnaab roars wildly through and over huge rock formations towards the Danube.

The way into the valley requires good physical condition uphill and good brakes downhill. A highlight in the literal sense is the monumental Falkenberg Castle on its rock. You can even spend the night inside the castle walls, the ambience is worth it.

The further route to Mitterteich is not quite as spectacular as the start, but still scenically attractive. The Waldnaab feeds a large pond area through which the cycle path meanders.

The Tirschenreuth pond pan extends over 15 square kilometers and consists of at least 2500 ponds and ponds, nobody has counted them exactly. Some of the waters are under nature protection, others are used for carp farming. You can tell by the herons, which like to steal one or the other big fish here.

Eslarn, another Zoigl stronghold, is part of every Zoigl tour. If you don't want to cycle back the same route from Mitterteich, you can shorten a section by train and travel to Neustadt/Waldnaab. Here it is worth taking a short detour by bike to the Hoher Parkstein, the southernmost extinct volcano in Bavaria, which Alexander von Humboldt once described as “the most beautiful basalt cone in Europe”.

We continue towards Eslarn. Until 1995, you could have boarded the Bimmelbahn, affectionately known as the Bockl, from Neustadt. Unfortunately, the railway line was closed at the time. Conveniently, a cycle path was laid out on the railway line, today the Bockl cycle path is Bavaria's longest railway cycle path at 52 kilometers.

The first 26 kilometers are easy to roll on a paved route from Neustadt to Vohenstrauß. Possibly too good, so that there is a risk of rushing past the only refreshment point far and wide, the bike station at Floss. It is therefore advisable to take provisions with you on this tour.

Behind Vohenstrauss, the cycle path meanders through fields that are surprisingly small, as if there had never been any land consolidation. The many curves always give cyclists new perspectives. The hilly landscape is beautiful anyway. At the former Fahrenberg stop, the highest point is reached in one of the rare wooded areas at 605 meters. After that it tends to go downhill.

The cycle path passes Waidhaus, once a border crossing to Czechoslovakia. The place still looks like zone edge area and twilight. At the end of the Bockl cycle path, in Eslarn, the end of the world seems to have been reached. There is not much going on here.

Of course, you can also see it positively: In Eslarn you can slow down wonderfully. And discover that special feature that only exists here - the general brewing law that has been handed down: "According to old tradition, every citizen in Eslarn is entitled to brew beer and tap it in the house."

For the local Zoiglstuben, however, this tradition meant enormous competition, which was so great that in 1963 the last Stube in town closed its doors. Today, around 60 private households still brew their own Zoigl in Eslarn. As always, you bring the ingredients and recipe to the communal brewery, and the master brewer then makes drinkable beer out of them. Georg Zierer senior has been doing this job for an incredible 70 years, the motto of the now 95-year-old: "Every day without beer is a health risk."

Fortunately, Zoigl-thirsty don't have to knock on any doors in Eslarn to get a beer. Because now there is a regular bar again, the Zoiglstube "Beim Streher". The boss brews and burns, the boss cooks and serves and keeps the place together.

The Zoiglstube opens every two weeks over the weekend - always as long as the beer lasts. The queues are long at lunchtime and in the evening, which is also due to the huge platters that are served here with the Zoigl. If you get bogged down in Eslarn, it is best to be chauffeured back with the bicycle bus or the local cyclist taxi, either to Neustadt or to Weiden, the largest city in the northern Upper Palatinate.

In the Middle Ages, Weiden was an important trading town at the intersection of the Golden Road and Magdeburger Strasse. After the Second World War, the city was marginalized due to its location on the Iron Curtain. Even well-known porcelain brands such as Bauscher and Seltmann Weiden were unable to stop the decline.

And of course the Zoigl flows freely here too. Either in the rustic Zoiglstube "Zum Stich'n", which opens at 5 p.m. Wednesday to Sunday; a minute later it's usually jam-packed. Or you can meet at the "Bräuwirt" in the old town, which not only serves Zoigl, but also Zoigl beer cheese and Zoigl beer goulash. He also has a nice souvenir on offer: Zoigl to go, i.e. freshly brewed St. Georgs Zoigl in a six-pack or in a barrel to take away.

Getting there: The best way to get there is by bike, but you can sometimes use regional trains or buses. The train takes you to Weiden in der Oberpfalz, the city can be reached from Nuremberg, Hof and Regensburg within an hour. Between Eslarn and Weiden there are shuttle buses or bike taxis that take bikes with you.

Nobody wants flat tires and jumped chains on a bike tour. The ADAC is now remedying the situation. Members can now also contact the Yellow Angels in the event of a two-wheeler breakdown.

‹ ›
Keywords:
DeutschlandLänderporträtsBayernRegionenporträtsRadtourenFahrradtourenFahrradwegeBierGastronomieOberpfalzEslarnVolker HäringSönke KrügerVohenstraußWindischeschenbachNeustadtMitterteichGoldene StraßeBurg FalkenbergVulkanSeltmann WeideWaldnaabtalHofMagdeburger StraßeZoiglReise
Your comment has been forwarded to the administrator for approval.×
Warning! Will constitute a criminal offense, illegal, threatening, offensive, insulting and swearing, derogatory, defamatory, vulgar, pornographic, indecent, personality rights, damaging or similar nature in the nature of all kinds of financial content, legal, criminal and administrative responsibility for the content of the sender member / members are belong.
Related News