"We, the wind, the sky": at the Women and Motorcycle festival, women bikers assert themselves without men

At the controls of big cars or small 150ccs, sports cars or touring motorcycles, women from all walks of life and of all ages ride the winding road that leads to the local airfield for the very first festival in France reserved for female bikers. 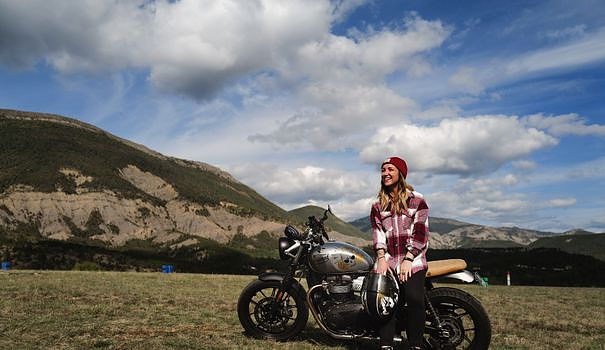 At the controls of big cars or small 150ccs, sports cars or touring motorcycles, women from all walks of life and of all ages ride the winding road that leads to the local airfield for the very first festival in France reserved for female bikers. .

"We are in a still very masculine environment and the gaze of men is sometimes heavy. Here, it is an opportunity to completely free ourselves from it", enthuses Alice Peuple, 40, the founder of the event.

Women still constitute only 15 to 20% of two-wheelers in the territory, according to various studies.

A biker for 15 years, Alice was inspired by exclusively female festivals such as Petrolettes in Germany or the Women Motors Bootcamp in Italy to reproduce their "lightness, benevolence, sisterhood".

For this, the festival offers all weekend yoga or tattoo workshops, discussions around sexuality, testimonials from bikers but also demonstrations of mechanics, "offroad" rides or first flights.

"The idea is that women leave here with more confidence, that they realize that they are capable of doing anything," explains Alice.

Behind her helmet customization stand, Laurène Beron welcomes the approach: "It's important for a lot of girls to have a secure place, where they don't feel judged, not weighed down, more serene than at a mixed festival".

Although many agree that the community has evolved, being a female biker in 2022 is sometimes difficult to accept.

"I struggled to get my license and a lot of men told me that was a sign that it wasn't for me. At one point, I ended up wondering if they hadn't reason", breathes Nina Facemaz, 21 years old.

The youngest of the festival finally passed her exam nine months ago.

At the controls of her 500 cc, she proudly indicates that she has accumulated "almost 11,000 kilometres".

Nina took advantage of her first day at the festival to learn how to clean her chain at the mechanical workshop, which met with great success.

On Friday, a dozen enthusiasts rushed to listen to Claire, a mechanic from a famous Japanese manufacturer, talk about brake fluid and pad lining.

"As women, we have a lot to say to each other: how we do this, that. We are less cautious to talk to each other" about motorcycles than in front of men, says Malorie Guedikian, 44, who toured the world on motorcycles.

"Handling a motorcycle is not easy. With my 1.58m, I have more difficulty than a man to push my motorcycle for example, which weighs more than 200 kilos", explains Laurène, pointing to her British motorcycle with which she has just completed a 2,000 km "road-trip" through France.

"For me, it was a real outlet, telling myself that I was able to drive a big motorcycle," smiles the young blonde woman.

In the evening, just after a conference of female biker entrepreneurs, the "sexo-drink", a kind of very sexually oriented aperitif, can begin. The words "clitoris", "confidence" in oneself and "courage" fuse.

"It's tough to drive a motorcycle for girls. We're proud to be together," enthuses the 60-year-old biker.

"When I'm stopped at a red light, the look of men is Ah yes anyway! . I think they envy us", she says proudly.

And who cares about the pitfalls and the few macho comments they still get. For the 150 festival-goers, the challenge is simple: "freedom".

"There's just us, the wind and the sky", lights up Nina.