"We are alive": Mariupol footballers motivated at the start of the season

FSC Mariupol are now warming up in the tiny Demydiv stadium, 20 kilometers north of kyiv but hundreds of kilometers from their city, from where the players managed to escape before the complete takeover by the Russians. 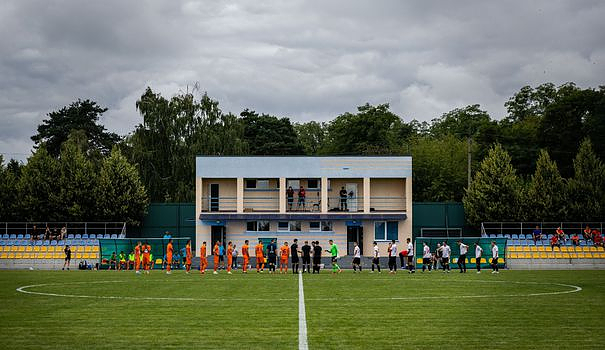 FSC Mariupol are now warming up in the tiny Demydiv stadium, 20 kilometers north of kyiv but hundreds of kilometers from their city, from where the players managed to escape before the complete takeover by the Russians.

Oleksandr Yaroshenko, the club's president, explained to AFP that he motivates his proteges by telling them: "You don't just play football. You have to do it because you are Mariupol".

Two days before the Russian invasion launched on February 24, the club was playing a friendly match, recalls Mr Yaroshenko, no one expected an attack then.

From February 24, the first bombs fell on the city, surrounded in a few days by Russian forces. Soon electricity and running water were cut off as players and coaches began to converge on FSC Mariupol's headquarters in the centre.

Mr. Yaroshenko, who also has a medical business, had volunteered to coordinate healthcare facilities in the city, which was then facing massive and destructive bombardment.

He first asked the players to leave Mariupol in an official bus parked a few meters from the stadium. For fear of leaving loved ones or fear of being targeted on the road, most refused.

It was only a week later that the players and their loved ones decided to leave.

"Our goal was to leave Mariupol. We had not planned to be together somewhere," continues Mr. Yaroshenko.

The team initially only managed to reach Berdyansk, a city controlled by the Russian army, where everyone took different paths, including to annexed Crimea, Georgia and Poland.

FSC Mariupol will play in the Ukrainian second division and their first match of the season will be against Lviv club Karpaty.

The city's main club, FC Mariupol, which plays in the first division, has been authorized not to participate in the competition this season and to return to the next one.

The same exception was granted to top division rival Desna, from the northern city of Cherniguiv, whose stadium was hit by a Russian rocket.

The decision to start the football season despite the war comes from President Volodymyr Zelensky himself, to restore, it seems, the morale of the population.

However, the matches will be played without spectators for security reasons and many clubs will not play at home but in safer areas of western and central Ukraine.

The war has had a devastating effect on Ukrainian clubs, especially the smaller ones, which don't have a lot of cash.

Only 10 FSC Mariupol players managed to reach their new base in the suburbs of kyiv. The squad was supplemented with youngsters from other clubs, including from the conflict-torn Donetsk region.

"Currently, the most important thing is to participate," summarizes Mr Yaroshenko. "We don't know if the championship can be taken to the end."

He nevertheless boasts of an "ideological team, built on the philosophy that we are Mariupol and that we are alive".