War in Ukraine: how will the European Union train Ukrainian soldiers?

The time of war in Ukraine is getting longer. 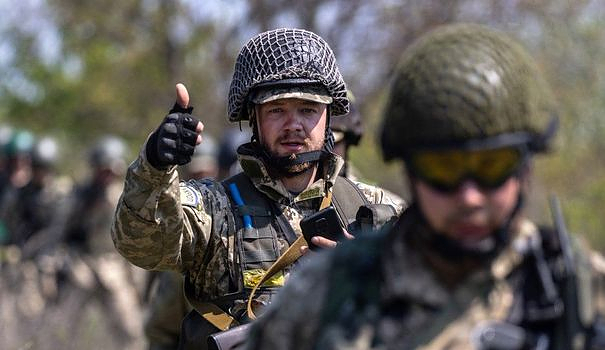 The time of war in Ukraine is getting longer. Just over six months after the Russian invasion, moments of respite are rare on the front line. On August 22, Ukraine, through the voice of the commander-in-chief of its army, General Valery Zaloujny, acknowledged that nearly 9,000 of its soldiers had been killed since February 24. At the beginning of June, Volodymyr Zelensky also admitted that at the height of the fighting, in May and June, the war carried off between 100 and 200 soldiers daily and injured 500 others. This figure has now fallen to 30, according to a statement by the Ukrainian president to the British newspaper The Guardian.

For several weeks, Ukraine has thus begun a vast recruitment operation among men aged 18 to 60 who are capable of fighting. This is not "a large-scale campaign, but we have both dead and wounded. There are units that need to rest and regain their combat capability. As a result, new forces must be brought in," Defense Minister Oleksiy Reznikov told BBC Ukraine. These generally have no experience of the military field: it is therefore necessary to train massively. "Ultimately, the goal is to change the balance of power on the front, deciphers with L'Express Michel Goya, former colonel of the navy troops. For that, we need more battalions, more brigades, more men than what the Russians have, who for the moment still dominate". And if Ukraine has dozens of training camps, some of which have already been bombarded by Russian missiles, outside help is not too much.

Last June, the British government launched a training program for Ukrainian soldiers in the UK. 3,200 men have already been trained, and London is aiming for ten thousand soldiers trained every three months, on average. In the space of three weeks, recruits learn the basics of warfare techniques such as the handling of weapons, urban combat, trench warfare, emergency care for the wounded and the law of armed conflict. Canada and the United States also offer these services to Ukraine, while France has trained soldiers in the use of the Caesar artillery system, recently delivered to kyiv.

To these is now added the European Union. On Tuesday, August 30, it gave the green light for a significant increase in its military support for Ukraine, which will take the form of sending an "important" training mission for the Ukrainian army. "It's not only about war, but also about the way it is fought, about the training of soldiers," EU foreign policy chief Josep Borrell said after talks. take place in Prague between the Union's Defense Ministers. “There are many training initiatives but the needs are enormous. We must ensure the coherence of these efforts,” he added.

An agreement in principle has been reached between the member countries, the practical details of which have yet to be discussed. However, the implementation of the program could be very rapid, according to Federico Santopinto, director of research at the Institute of International and Strategic Relations (Iris), specialist in defense issues within the EU. "For the EU, it is a question of identifying the personnel and the equipment which will be deployed for the good of this training mission. Also, it is too dangerous to carry out these formations on the Ukrainian territory prey to the bombardments It is therefore necessary to designate the host country or countries, which will probably be neighboring countries such as Slovakia, Romania or even Poland", he explains.

“There is already a lot of training provided by Western countries, especially by the British. We will have to be careful that there are no problems of coherence and coordination because we do not all have the same methods. “, adds Michel Goya.

According to a document consulted by our colleagues from Le Monde, in addition to initial combat training, the Ukrainian army would have specific needs in terms of "military medicine, mine clearance or sniper shooting". For the former colonel of the navy troops, "the training needs are immense in all areas". And for good reason: before the war, the Ukrainian regular army numbered some 200,000 men, while nearly 700,000 can be mobilized today.

The European Union has not yet specified the terms of the training it is preparing to deliver. However, according to Michel Goya, Ukraine needs individual reinforcements as much as brigades. "In an emergency, it is necessary to supplement and help the units already engaged on the ground. And in a longer term perspective, it is necessary to form new units, new brigades made up of several thousand men. But that takes time. time. During the Second World War, the United States, which had almost no army, formed a large division in eight months," he comments.

The EU already has some experience in training foreign soldiers, having carried out similar missions from the early 2010s. Called the European Union Training Mission (EUMT), the first ones took place in Somalia. The following in Mali and the Central African Republic. "Generally, these missions do not change the situation in the conflict, but add a stone to a very complex building", analyzes researcher Federico Santopinto. "In Ukraine, the reason why the EU wants to deploy a military training mission is essentially political. At a time when it wants to develop a common defense policy, it must be present in this European theater."

But some diplomats from member countries find this military training project delicate. Austrian Defense Minister Klaudia Tanner notably expressed her concerns. "The first question to be clarified is whether such a mission can be well implemented," she said. Because some observers point to the fact that the EU must maintain its "non-belligerent" status from the point of view of international law. "Europe is not at war with Russia, emphasizes Federico Santopinto. But it is objectively very involved in the conflict through the massive support given day after day, the arms delivered, the status of candidate granted to Ukraine for entering the EU, the sanctions imposed on Russia... We are part of the equation and this mission is no more dangerous than any other."

These fears are not recent. And have already been right about a first similar project. In the fall of 2021, the track of a training mission for Ukrainian soldiers had thus been ruled out in order to avoid an escalation with Moscow... Before being canceled, in February, to deal with the urgency of the war.