War in Ukraine: annexation of regions, charge against the West... What Putin said 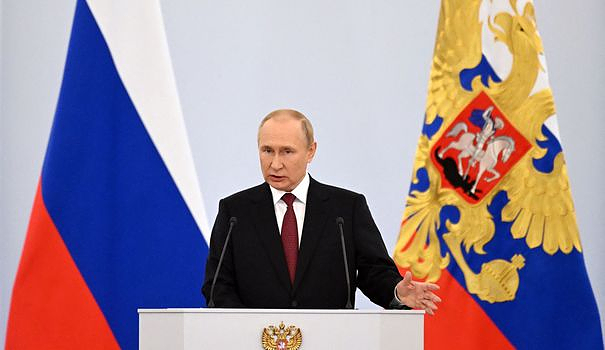 A simple formalization. Russian President Vladimir Putin formalized this Friday, September 30, in Moscow, the annexation by Russia of four Ukrainian regions, following "referendums" widely denounced by kyiv and its Western allies. "Today we are signing an agreement on the integration" of these regions into Russia, Vladimir Putin told the Kremlin before the government, deputies and senators, and other representatives of the Russian state.

For nearly forty minutes, the master of the Kremlin above all delivered a heavy charge against the West, before the signing ceremony of the agreements in the presence of the four pro-Russian leaders of these territories controlled in whole or in part by Moscow, who signed turn in turn the documents of annexation.

The inhabitants of the annexed regions of southern and eastern Ukraine, Lugansk and Donetsk, Kherson and Zaporizhia, will be "our citizens forever", the Russian president said. “People voted for our common future,” he added.

"People have made their choice and it is their inalienable right of self-determination of peoples carried by the UN", launched the Russian president. To justify its annexation, it thus used the pretext of "Article 1 of the United Nations on self-determination", while the Charter of the United Nations explicitly recognizes the "principle of the equal rights of peoples and of their right to dispose of themselves". The master of the Kremlin also warned: "We will defend our lands by all means, we will guarantee the safety of our peoples."

Two hours earlier, this Friday, the Kremlin had indicated that it still had to "clarify" whether Russia was annexing all of the Ukrainian regions of Kherson and Zaporizhia or only the parts it occupies. "Regarding (the borders) of the Kherson and Zaporizhia regions, I must clarify," Kremlin spokesman Dmitry Peskov told reporters. The two other regions of Donetsk and Lugansk will be annexed in their entirety, Moscow having recognized the sovereignty of pro-Russian separatist regimes at the end of February, just before the Russian assault on Ukraine.

Vladimir Putin also called on Ukraine on Friday to "immediately cease hostilities" and "to return to the negotiating table".

"We are ready to discuss but we are not going to discuss the choice of residents of Luhansk, Donetsk, Kherson and Zaporizhia," he added. "This is the only path to peace," he continued.

The Russian head of state also accused Westerners of being behind the "explosions" which caused major leaks in the Nord Stream 1 and 2 gas pipelines, built to transport Russian gas to Europe.

"By organizing explosions on the international gas pipelines that run along the bottom of the Baltic Sea, they have actually begun to destroy the European energy infrastructure", lambasted Vladimir Putin, attributing this "sabotage" to the "Anglo-Saxons".

The Russian president also assured that his country "does not aspire" to restore the USSR, despite the offensive in Ukraine and the annexation of four Ukrainian regions. "The USSR is gone, the past cannot be brought back. And Russia does not need this today, we do not aspire to it," said the head of state.

As usual, Vladimir Putin also blamed the West. According to him, "the West is ready to do anything to preserve the neocolonial system which allows it to parasitize and, in reality, to plunder the whole world", denounced the Russian president in front of the political elite of his country. "They want to see us as a colony," he further castigated.