There has been slight movement again in the top 10 list of adopted first names: While the name Emilia is still number 1 for girls in the ranking of first name experts Knud Bielefeld, Noah has now landed at the top after 2020. 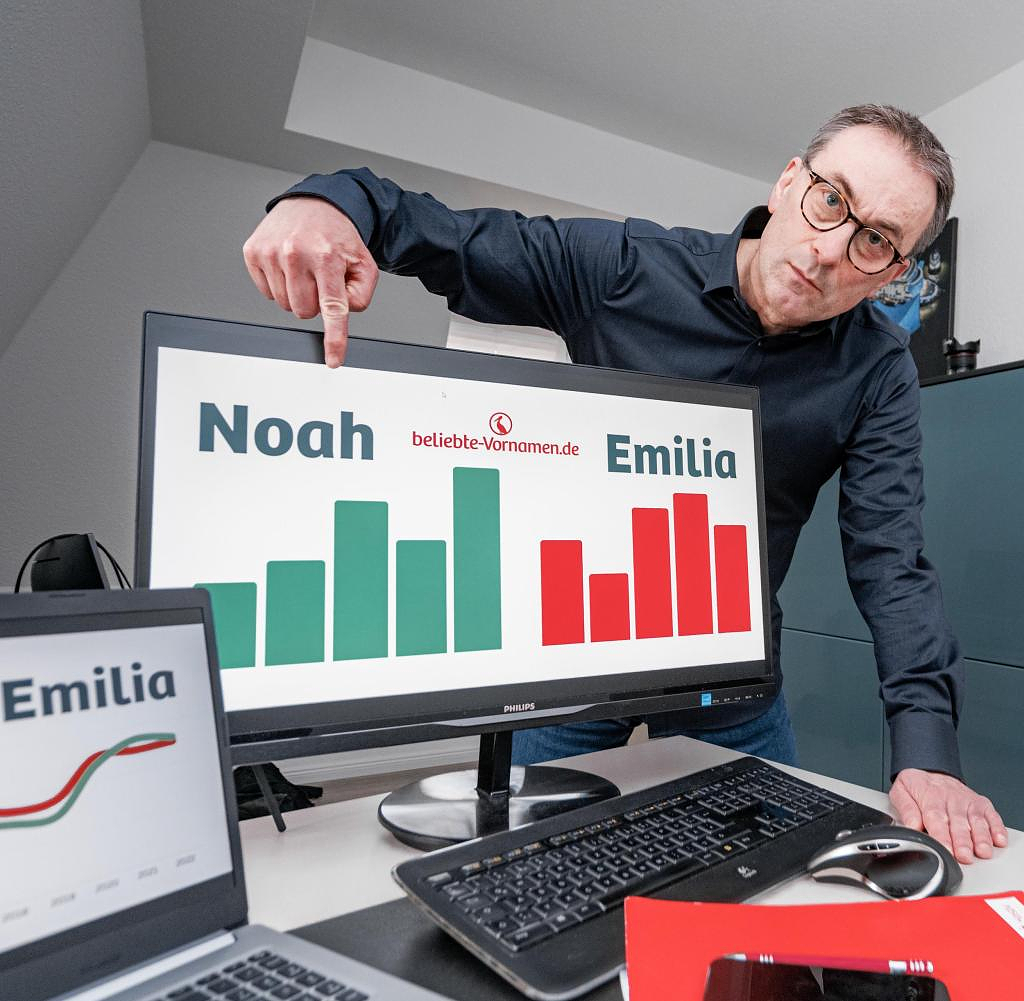 There has been slight movement again in the top 10 list of adopted first names: While the name Emilia is still number 1 for girls in the ranking of first name experts Knud Bielefeld, Noah has now landed at the top after 2020. "Both names have been in the top ten for a long time," said Bielefeld in Ahrensburg (Schleswig-Holstein). The hobby name researcher published his ranking on Friday. Last year, the name Matteo took the top spot among boys.

At the same time, a new name is on the way to the top group. “The boy's name Theo is rising among the top names. In the last few years he has steadily risen to the top and is now in sixth place. For nine years, the boy's first name was number 1 until it was ousted from there in 2020. In the meantime, he can only be found in 10th place in the nationwide evaluation. "It seems to be slowly going out of fashion now and long-standing top names like Lukas or Luka are slowly disappearing from the first name lists."

Even when looking at the back of the table, Bielefeld can make out a first name that is becoming more and more popular. "Not yet in the top ten, but the name Nelio has risen very strongly." When looking for the reasons, the name expert has an assumption: "It seems to be because the entertainer and influencer Dagi Bee called her son that.”

In search of connections between his statistics and events of the year, Knud Bielefeld looked at the development of the name Layla and was surprised. "I didn't think there were so many parents who call their daughter that." The controversial party hit "Layla" by DJ Robin and Schürze was hotly debated in the summer and was often (in vain) banned at folk festivals.

In the popularity scale for girls' names, it has therefore neither dropped nor climbed, as Bielefeld said. "It hardly had any effect. The name has hardly been given less frequently than in previous years.”

And Knud Bielefeld has also identified a trend in the choice of first names for girls and boys. "There's a big trend, and that's vowel-rich names that don't have any consonants other than M, N, and L." A lot of names follow this pattern, and the winning name Emilia fits in perfectly.

There are certainly regional differences: the first names Mia and Noah were particularly popular with parents in the north this year. The two names made it to the top of the rankings for Hamburg and Schleswig-Holstein. The girls are followed by Ella, Mila, Ida and Emma. Emilia is at the top nationwide, in the north the name only comes in 6th place. Among the boys, Noah is followed by the names Finn, Emil, Henry and Leon. Parents in northern Germany are often trendsetters when it comes to choosing a name. "It's a bit more innovative in the north and there are more Scandinavian names," Bielefeld told dpa. One reason for this is the geographical proximity to Sweden, Finland, Norway and Denmark.

The evaluations for the north also showed that - compared to other regions - the names Bruno, Fiete, Lino, Cleo, Isabella and Lotte are often given in Hamburg. Enno, Jonte, Lasse, Enna, Jonna and Liv are also very popular in Schleswig-Holstein. Parents in Mecklenburg-Western Pomerania often chose Fiete, Hugo, Pepe, Frieda, Merle and Thea.

‹ ›
Keywords:
VornamenUngewöhnliche VornamenHamburgLauterbachJörnEmiliaKnud BielefeldAhrensburgEnnaKrimi
Your comment has been forwarded to the administrator for approval.×
Warning! Will constitute a criminal offense, illegal, threatening, offensive, insulting and swearing, derogatory, defamatory, vulgar, pornographic, indecent, personality rights, damaging or similar nature in the nature of all kinds of financial content, legal, criminal and administrative responsibility for the content of the sender member / members are belong.
Related News