Vladimir Putin, the nuclear temptation: our five articles to understand everything

Will support, will not support? More than seven months after the start of the Russian invasion of Ukraine, Vladimir Putin keeps repeating to anyone who will listen that yes, he is ready to press the nuclear button if necessary. 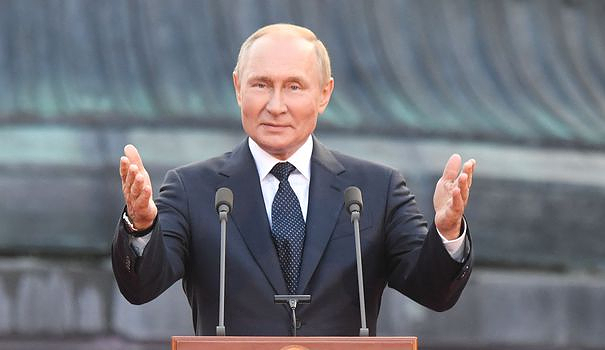 Will support, will not support? More than seven months after the start of the Russian invasion of Ukraine, Vladimir Putin keeps repeating to anyone who will listen that yes, he is ready to press the nuclear button if necessary. A threat agitated on many occasions, taken very seriously by the international community, starting with the United States. Joe Biden even went so far as to affirm, Friday, October 7, that the master of the Kremlin "is not joking when he talks about the potential use of tactical atomic weapons or biological or chemical weapons". And to warn of a risk of nuclear "apocalypse".

Locked in his dream of entrenching Russian greatness in the world order, the Russian president saw the war in Ukraine as the culmination of nearly a quarter century of effort. But on the ground, his Russia is largely isolated and its army exhausted. The counter-offensive of kyiv does not stop pushing back the soldiers of the invader. But always with the same conviction, he repeats that Ukraine is not a nation, that its independence is a bad turn of history. In this logic, on September 30, he proclaimed the annexation of four additional Ukrainian regions even if his army suffered setbacks there. Cornered on the military front, under pressure inside after having ordered the "partial mobilization", how can Putin, who dreams of unifying Russian lands, raise the bar?

Vladimir Putin seems more fragile than ever, and that is certainly what makes him so dangerous and unpredictable. To the point of threatening to use his all-purpose: nuclear weapons. "It's not a bluff," he said himself. L'Express offers five articles to analyze Putin's words, his intentions, but also give the floor to the main experts in the field. The opportunity also to read an interview with Svetlana Tikhanovskaïa, a Belarusian opponent who warns of the role that her country could play in this escalation.

During his speech in the Kremlin on Friday September 30, 2022, Vladimir Putin delivered a heavy charge against the West.

Nuclear specialist, American journalist Eric Schlosser questioned experts on how the United States and NATO should react in the event of a nuclear attack on Russia. Difficult choices, but necessarily strong... This large format can be read here

Extract: This scenario gives Western chancelleries cold sweats. In a blinding light, a gigantic mushroom rises above Serpents' Island, a Ukrainian rock located in the Black Sea, about fifty kilometers off the Danube delta. Determined to reverse the course of the war in Ukraine, Vladimir Putin has just broken a historical taboo by detonating an atomic bomb. For the United States, an unacceptable limit has just been crossed. Its president, Joe Biden, gives the green light to a muscular reply: a rain of missiles destroys the troops responsible for the attack. This article can be read here

He is one of the contributors of the fascinating and monumental World History of the 20th Century (PUF), which recalls how this century still marks our time. Professor of contemporary history at the Sorbonne, specialist in Nazi ideology and author in particular of the remarkable Grand Récit, Johann Chapoutot analyzes for L'Express the war in Ukraine, the rise of the far right in Italy or Sweden and the " end of abundance", placing this news in a historical context. This interview can be read here

Of all the scenarios on the table after the success of the Ukrainian counter-offensive, Vladimir Putin chose that of escalation by announcing the partial mobilization of his population... at the risk of seeing them revolt. Listen to this episode of La Loupe here:

Extract: They are the hardliners of the regime, the exacerbated nationalists, the diehards. They are politicians, intellectuals or journalists, but above all they constitute the essential relays that the Kremlin needs to shape consciences. Faced with the difficulties that the Russian army is currently encountering in Ukraine, these hawks sometimes seem to be free spirits, not hesitating to criticize the army - which is criminally reprehensible in Russia - or to propose extremist ideas. They thus sometimes seem more fanatical than Putin himself. Unless the latter uses them to spread ideas, denounce attitudes and probe reactions. Listening to or reading the daily ramblings of Vladimir Solovyov, the warlike eructations of Ramzan Kadyrov, the civilizational analyzes of Nikolai Patrushev, the administrative justifications of Sergei Kirienko and the nationalist injunctions of Egor Kholmogorov is interesting in that they represent all the feelings of Kremlin, in its certainties and in its doubts. This article can be read here

In exile for two years in Lithuania, Svetlana Tikhanovskaïa has taken up the torch from her husband, Sergei Tikhanovski, an opponent of Belarusian President Alexander Lukashenko and imprisoned since May 2020. Having become leader of the opposition, she travels across Europe so that the world does not don't forget Belarus and call for a "strengthened coalition with Ukraine". "Ukrainians and Belarusians are in the same boat," she insists. "Because even if the conflict is taking place on Ukrainian territory, we are witnessing a world war between democracy and dictatorship." This interview can be read here