US Open: Caroline Garcia, a long-awaited half

"I don't know how to describe what I feel, the energy was crazy, my head is buzzing," said the 17th in the world, before leaving the Arthur-Ashe court where she had just knocked out Gauff (12th) 6-3, 6-4. 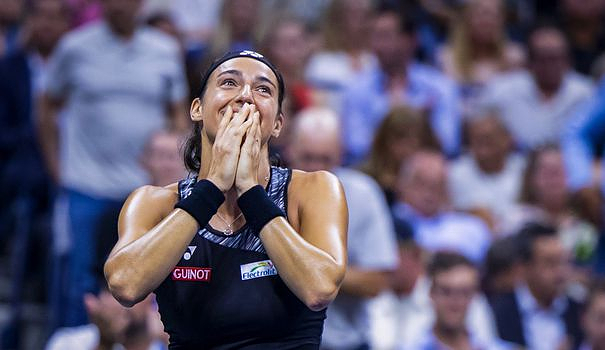 "I don't know how to describe what I feel, the energy was crazy, my head is buzzing," said the 17th in the world, before leaving the Arthur-Ashe court where she had just knocked out Gauff (12th) 6-3, 6-4.

She becomes the first French player to play in a Grand Slam semi-final since Marion Bartoli, when she won Wimbledon in 2013.

On a short Arthur-Ashe acquired from her opponent, Caroline Garcia has thus lined up a 13th victory in a row since qualifying in Cincinnati, where she had won the tenth title of her career, just before coming to New York.

She is only the third French player to reach the last four at Flushing Meadows in the Open era (since 1968), after Amélie Mauresmo (2002 and 2006) and Mary Pierce (2005), and the eighth all Majors combined.

Faced with Gauff, who had beaten her in their two previous meetings, in Indian Wells in 2021 and Doha in 2022, Garcia immediately took the match in hand by imposing her power, her speed, and by putting Gauff under a pressure that the American, finalist of the last Roland-Garros, could not bear (24 unforced errors, 26 caused errors).

"I have always played aggressively, it turns out that in recent months I have been in good enough physical shape to play this game and continue on this path," she said.

Garcia made the entry break in the first set by benefiting from a double fault from his opponent. Then she managed a double break thanks to a passing shot that seemed easy for Gauff but which the American played too long.

Trailing 4-0, Gauff played a little more aggressively to take back a serve from Garcia, but the Frenchwoman got her hands on the match and won her first set point.

She followed up with a new entry break in the second set and did not let go of her advantage to conclude on her first match point, not without having saved a break point at 3-2.

Her crushing victory over the 19-year-old American confirms that Garcia is the most impressive player since the start of the tournament.

And she does not hide her ambitions before playing the next match: Ons Jabeur, "since the juniors, she is strong. I look forward to taking up this challenge", she launched.

"I confess to being a little surprised to find myself in the semi-finals, but I have really developed my hard game over the past two years. And my final (at the Masters 1000) in Miami in April proved to me that I could go far in big tournaments," explained the Norwegian, a clay-court specialist.

At 23, he is extending a double dream: that of winning a first Grand Slam tournament, after his first final, lost to Rafael Nadal in the spring at Roland-Garros, and that of becoming world N.1 at the end of the tournament.

To get closer to the title, he will have to dismiss Russian Karen Khachanov (31st) on Friday, who avenged his compatriot and defending champion Daniil Medvedev by eliminating his Australian scorer Nick Kyrgios (25th) 7-5, 4-6, 7-5, 6-7 (3/7), 6-4, after a very big standoff of almost four hours which ended around 1am on Wednesday.

To hope to ascend to the world throne, from which Medvedev will automatically fall on September 12 after his premature elimination, he will have to reach the final, or even win it if he faces Carlos Alcaraz there.

If neither of these two young people reaches the final, it will be the former, Rafael Nadal, who will once again become the N.1 at ATP.