Ukraine: in Izioum, rebuilding and erasing the scars of Russian occupation

The asphalt has passed and the shell craters have been filled. 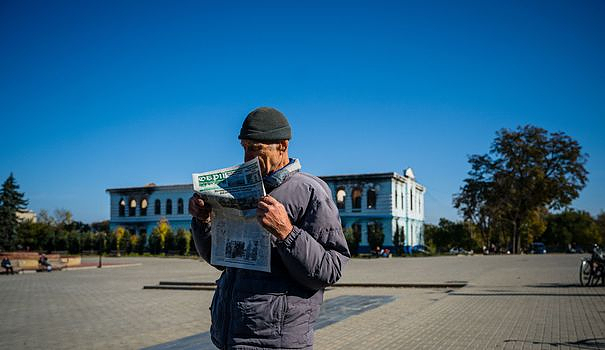 The asphalt has passed and the shell craters have been filled. Fresh white anti-overtaking lines are painted early in the morning by a team of workers in orange vests.

Five weeks after the liberation of this small town in eastern Ukraine, another battle begins, with an armada of construction machinery and workers, to rebuild what remains of the infrastructure and erase the faster the scars of the Russian occupation.

And the Ukrainians are starting to use what the Russians left in their wake. Like the remains hoisted by a backhoe of a military bridge, collapsed on one of their "Z" tanks, in the Donets river.

"We will recover each of their parts, retype them and use them here or in another place where they will be needed", explains Lieutenant Denis Ponomarenko, 27, of the army's roads, bridges and roadways department.

At the entrance to the city, in the middle of the ruins, a yellow and blue welcome sign bears the message: "Friends, you are free!". It covered the Russian flag that had been stuck there from April to September.

Izioum came out of her isolation. Roads and rail links are working and the telephone and 4G network has been partially restored for about a week.

But the essential services of water, gas and electricity have been decimated, leaving the 8,000 to 9,000 people who remained or returned (out of 46,000 inhabitants before the war) entirely dependent on humanitarian aid to survive, indicates in its bulletin the United Nations Office for the Coordination of Humanitarian Affairs.

Every day in the central square, where Ukrainian President Volodymyr Zelensky came on September 14 to hoist the yellow and blue flag again, a queue forms to hope to collect a food parcel.

"Apart from that, there is nothing that works again," plagues Ivan Zakharchenko, a 70-year-old resident who says he waits in priority for the return of the buses to go and have his pacemaker checked.

In the blue sky of Izioum, calm and without the slightest missile, a worker on a telescopic ladder nails sheets of chipboard on the gaping windows of the historic church of the city, built in 1648 at the same time as the old fortified city.

The rest of the city, entirely Soviet in its arrangement around stately public buildings now in ruins and blocks of workers' buildings, is nevertheless unlivable.

"I have some water at home, but I live on the 3rd floor and the pressure is very low. I also have electricity, but we have no gas and no heating and we don't know if we will have enough for the winter," worries a resident, Nadezhda Nesterenko, 47.

“My daughter lives above on 5th and she still has a missile stuck in her roof, and her kitchen and bathroom are open to the wind,” she adds.

"Nobody came to take it away. We didn't see anyone," accuses Ms. Nesterenko.

Questioned by AFP, the mayor of Izioum, Valeri Marchenko, indicated that the municipality "was trying to help repair the damaged apartments in order to be able to heat them this winter".

"No major work can be undertaken by spring," he nevertheless acknowledges, adding that he is working with "volunteers".