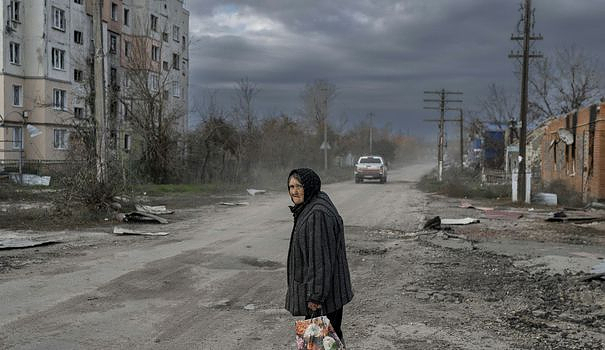 A few minutes earlier, the Russian army had announced that it had effectively begun its withdrawal inside the Kherson region, moving its troops from the right bank to the left bank of the Dnieper River.

"Units of the Russian troop contingent are maneuvering towards positions set up on the left bank of the Dnieper River, in accordance with the plan," the Russian Defense Ministry said.

This withdrawal, announced on Wednesday, involves a departure from the eponymous city of Kherson, the regional capital.

On Wednesday, the general in charge of the Russian offensive in Ukraine, Sergei Surovikin, announced that the withdrawal would be done "very quickly" to preserve the "life of every Russian soldier", without giving a timetable.

Concretely, Moscow seeks to consolidate its positions by establishing a line of defense behind the Dnieper river, a natural obstacle.

On the Ukrainian side, the announcement was received without triumph and with circumspection, kyiv suspecting a trap.

Ukrainian President Volodymyr Zelensky reacted on Wednesday with "extreme caution", believing that Moscow is "not giving a gift".

“We can neither confirm nor deny the information relating to an alleged withdrawal of Russian troops from Kherson,” General Oleksiï Gromov, representative of the Ukrainian general staff, told the press on Thursday. But he also noted that with their backs to the Dnieper, the Russians have "no choice but to flee".

In Mykolaiv, a large southern city about a hundred kilometers northwest of Kherson, residents are just as suspicious.

"We can't trust, no one is going to give us anything back just like that," Svitlana Kyrytchenko, a saleswoman, told AFP.

Elsewhere, Ukraine also claimed an advance of its army "up to two kilometers" in 24 hours in the Lugansk region (east), without further details.

The Kremlin made no comment to him, the daily briefing of his spokesman having been canceled Thursday.

US President Joe Biden, whose arms sent to Ukraine have been essential in inflicting defeats on Moscow in recent weeks, said the announcement of the withdrawal was "proof that (the Russians) have real problems".

If confirmed, this retreat constitutes a new scathing setback for Moscow, already forced to abandon the Kharkiv region (northeast) in September.

Especially since Vladimir Putin had claimed at the end of September the annexation of four Ukrainian regions including Kherson and ordered on September 21 the mobilization of some 300,000 reservists to consolidate the Russian lines.

And the Russian president had warned that Russia would defend "by all means" what it now considers its territory.

The symbol is all the stronger since Kherson, 280,000 inhabitants before the conflict, was the only regional capital conquered by Russian forces. The region also borders Crimea, the Ukrainian peninsula annexed by Moscow in 2014.

Since the summer, the Ukrainian army, armed with Western armaments, such as Himars high-precision rocket launchers, has gradually worn down the Russian forces by pounding the bridges essential to supplying the troops on the western bank of the Dnieper.

kyiv's successes have also revived speculation about the possible resumption of peace talks in the medium term, with some media even claiming that the West was pushing Ukraine to resume them.

The top US military official thus warned that military victory was probably impossible for both kyiv and Moscow.

“There are well over 100,000 Russian soldiers killed and wounded,” General Mark Milley, speaking to the New York Economic Club, said on Wednesday. "Same probably on the Ukrainian side," he added.

"There must be a mutual recognition that military victory is unlikely, in the proper sense of the word, to be achieved by military means", added General Milley, believing that there is "a window of opportunity for the negotiation".

Sign of a change of tone after a visit to kyiv on Friday by US presidential adviser Jake Sullivan, President Zelensky listed Monday his conditions for the resumption of talks with Moscow, including the withdrawal of his troops from Ukrainian territory.