Two of the nine people arrested in connection with the shooting that took place last Monday in Bastetan have been sent to prison by the head of the Investigating Chamber number 1 of Baza. 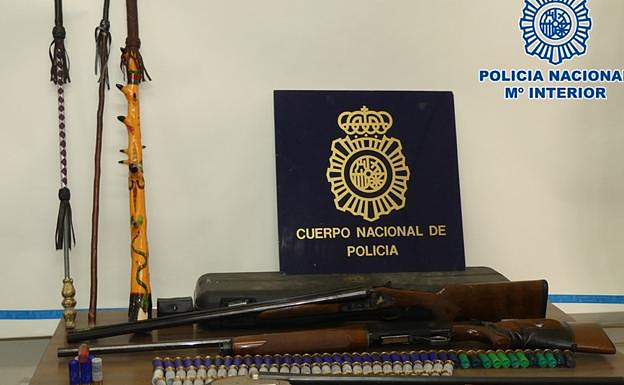 Two of the nine people arrested in connection with the shooting that took place last Monday in Bastetan have been sent to prison by the head of the Investigating Chamber number 1 of Baza. They are accused of attempted murder and injuries, as well as illegal possession of firearms. After listening to their statements, the National Police released the other seven suspects.

National Police has arrested nine individuals, five men and four ladies, in Baza, Granada, for their alleged involvement with the shooting that occurred in the early hours on May 9, in the upper part of Cascamorras Ave in this town. The incident was triggered by an argument over the volume of the music. Agents also intervened to seize three shotguns, ammunition, and other items related to the event during searches of two of the detainees.

A 37-year old man was injured in the brawl and is currently being treated. Another man suffered minor injuries from an illegally-owned hunting shotgun cartridge.

After two in the morning, numerous calls to the Police were made reporting a fight between firearms on Jesus Fernandez Santos de Baza Street. Agents from the National Police and Local Police went to the area, where there were many people, and they observed multiple impacts of projectiles in two vehicles and in one house. After which, they discovered that a man had been injured by an impacts projectile and he was already taken to hospital.

The scene information revealed that the incident was caused in part by loud music being played at one family's door. This caused disruption for the neighbor across the street, who claimed he had to rise early every morning. Next, he will go to work.

Agents specializing in this area surrounded the area for a thorough technical police visual inspection. Due to the large number of people that congregated in the area and the nervousness they displayed, the Civil Guard was called to assist the National Police agents who were also traveling to the hospital. A large number of relatives were also found at the hospital.

The first investigation was completed by the Baza Judicial Police Brigade who arrested four members of the same families. Three of them were men, one woman and one of their wives. The wounded victim of a gunshot wound was then transferred to a hospital. From Granada, and admitted to the ICU.

Nine people were arrested in total. However, it is possible that more will be made since it was determined that several shots from long guns were used and that the fire was also crossed.

According to the investigation the wounded man is still in hospital recovering from his injuries and would have attempted to mediate between the two families before finally being struck with pellets in the stomach.

‹ ›
Keywords:
EncuentranArmasNumerosaMunicionCasasImplicadosTiroteoBaza
Your comment has been forwarded to the administrator for approval.×
Warning! Will constitute a criminal offense, illegal, threatening, offensive, insulting and swearing, derogatory, defamatory, vulgar, pornographic, indecent, personality rights, damaging or similar nature in the nature of all kinds of financial content, legal, criminal and administrative responsibility for the content of the sender member / members are belong.
Related News