Trump and his children sued in New York for tax evasion

Letitia James, an elected Democrat who has been waging the judiciary for years against the billionaire, has indicated that she is seeking $ 250 million in reparations on behalf of the State of New York, as well as bans on running companies for Donald Trump and his children Donald Trump Jr, Ivanka Trump and Eric Trump. 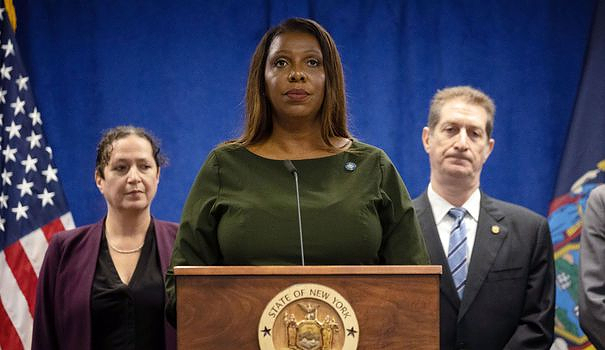 Letitia James, an elected Democrat who has been waging the judiciary for years against the billionaire, has indicated that she is seeking $ 250 million in reparations on behalf of the State of New York, as well as bans on running companies for Donald Trump and his children Donald Trump Jr, Ivanka Trump and Eric Trump.

One more legal thorn in the side of the 76-year-old Republican billionaire, who already sees justice investigating his alleged efforts to overturn the results of the 2020 presidential election lost to Joe Biden, his role in the violent assault on his supporters against the Capitol on January 6, 2021, and more recently his handling of the presidential archives, which led the FBI to raid his Mar-a-Lago residence in Florida.

The lawsuit, filed in the New York State Supreme Court, "demonstrates that Donald Trump falsely inflated the net worth (of his assets) by billions of dollars to enrich himself unjustly and to deceive the system, as well as all of us”, she assured.

According to her, the value of assets has been "repeatedly and persistently manipulated" to "encourage banks to lend money to the Trump Organization on more favorable terms", "to pay less tax" or even " to induce insurance companies to provide insurance coverage for higher limits and at lower premiums".

“To sum up, he lied to obtain substantial financial benefits,” she accused.

"Letitia James is the most corrupt prosecutor in the history of the United States," added her son Eric Trump, prosecuted as executive vice-president of the Trump Organization. "She campaigned on a promise to sue my dad... See the outcome," he tweeted.

In a criminal part of the case, Allen Weisselberg pleaded guilty before the Manhattan District Attorney to 15 counts of fraud and tax evasion involving $1.76 million in unreported income between 2005 and 2021. The Trump Organization is to stand trial for the same facts as a corporation in a trial starting October 24.

"Take Mr. Trump's triplex, you know his Trump Tower triplex on 5th Avenue" in New York, cited the prosecutor as an example to reporters, before explaining that the value of the apartment would have been declared on the basis of an area three times larger than reality (2,700 square meters against 1,000), making it possible to evaluate it at 327 million dollars.

As a result, she also calls for "prohibition" for Donald Trump or the Trump Organization "to engage in any acquisition of commercial real estate in the State of New York or to request loans from any financial institution".

She also forwarded the file to the criminal justice system as well as to the American tax services (IRS).

The investigation was opened in March 2019 after the explosive testimony in Congress in Washington by one of Donald Trump's former personal lawyers, Michael Cohen, who has become one of his worst detractors.

After months of arm wrestling, Donald Trump testified under oath in August before the prosecutor. But he had used more than 440 times his right not to answer questions under the 5th Amendment of the American Constitution, which allows any litigant not to testify against himself.