Tribute to the Senegalese riflemen on the occasion of November 11

"Together, we have come to underline the very beautiful friendship and cooperation between France and Senegal, as between Europe and Africa", indicated Mrs. 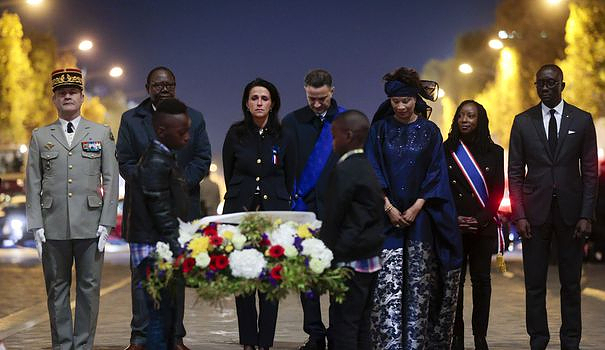 "Together, we have come to underline the very beautiful friendship and cooperation between France and Senegal, as between Europe and Africa", indicated Mrs. Zacharopoulou.

The two ministers together laid a wreath on the tomb of the unknown soldier in the presence of four Senegalese riflemen.

"The African, the Senegalese who comes here this evening on November 11 next to the French minister (...) to pay homage, to honor all those who have fallen on the battlefield, it is an important symbol “said Ms. Tall Sall.

"It is important to pay tribute to those who, by the hundreds of thousands, fought for our freedom", indicated Mrs. Chrysoula Zacharopoulou, praising their "heroic commitment".

Created by Napoleon III in 1857 in Senegal, hence its name, this infantry corps then expanded in its recruitment to include men from other regions of West and Central Africa conquered by France at the end of the 19th century. century.

Among the 134,000 riflemen who fought against Germany during the First World War, "about 30,000 of them died or were declared missing", underlines the town hall of Paris. About 175,000 Africans then fought to liberate France during the Second World War, notably during the landing in Provence.

This body was dissolved in the early 1960s, at the end of the wars of independence during which some of them were still fighting for France.

The Senegalese skirmishers and their heirs deplore a lack of recognition, in particular because of lower pensions than those of their French brothers in arms, or visas which are difficult to obtain for their descendants.