The Dutch formation, launched at more than 56 km / h on average, flew over this short time trial of 23. 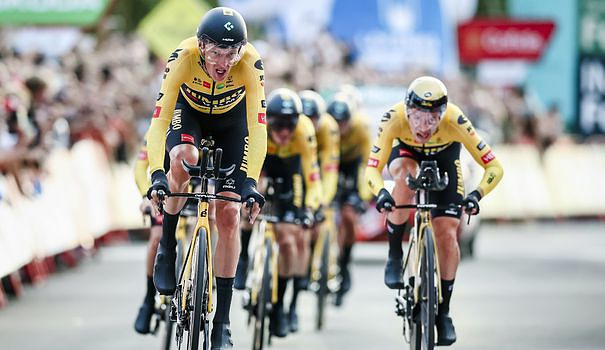 The Dutch formation, launched at more than 56 km / h on average, flew over this short time trial of 23.3 kilometers traced in the streets of Utrecht and finished 13 seconds ahead of the British team Ineos-Grenadiers of Richard Carapaz and 14 on the Belgian formation Quick-Step of Remco Evenepoel and Julian Alaphilippe.

On the ceremonial podium, Gesink, who has remained faithful to his team of always (Rabobank having become Jumbo-Visma), donned at 36 and for the first time in his long career the leader's jersey of a Grand Tour.

"I can't believe it, it was crazy. I'm really grateful to be able to put on the red jersey, it will obviously go down as one of the highlights of my career. I knew this team had good options to win this stage, because there are a lot of strong guys in this group. The plan was to try to stay glued to the wheel of the strongest", reacted Gesink on the finish line.

"They let me cross the line first, it's a very nice way for them to honor me, and I want to thank them for that," he added.

The yellow train of the Jumbo thus perfectly launched its leader towards a fourth historic coronation. Long uncertain after his retirement from the Tour de France on July 17, the 32-year-old Slovenian reassured about his form.

In the event of a final victory in Madrid on September 11, Roglic would equal the record of Spaniard Roberto Heras, winner in 2000, 2003, 2004 and 2005, but would become the first rider in history to win four Tours of Spain in a row. .

- Without Quintana, Arkéa is disillusioned -

Under the clouds, even in the rain for the first starters, the Vuelta kicked off this 2022 edition, making Utrecht the first city in the world to host the big starts of the three major Tours (Italy 2010, France 2015 and therefore Spain 2022).

In the absence of Nairo Quintana, disqualified from the Tour de France on Wednesday for a medical offense and who preferred to withdraw from the Spanish loop on Thursday to "prepare (s)a defense", his Arkéa-Samsic team finished 17th in this first stage. , one minute and 25 seconds behind the Jumbo-Visma.

The best French formation was Groupama-FDJ which, led by Thibaut Pinot, finished 6th in the stage, 38 seconds behind the winners.

On Saturday, the second stage will take the peloton from 's-Hertogenbosch to return to Utrecht after 175.1 km generally flat and a final reserved for sprinters.

After a final stage in the Netherlands on Sunday, the riders will reach the Basque Country during Monday's rest day, before a fourth stage on Tuesday between Vitoria-Gasteiz and Laguardia.