Never until these legislative elections had the traditional Swedish right considered governing with the direct or indirect support of the Democrats of Sweden (SD). 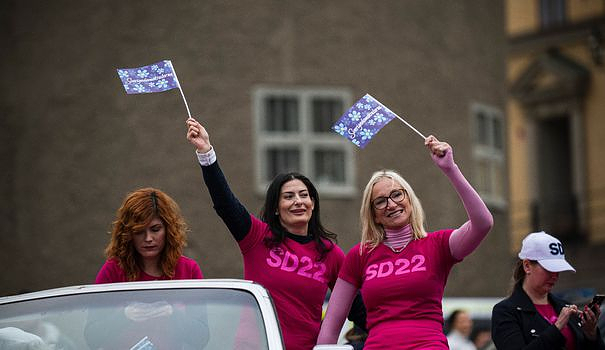 Never until these legislative elections had the traditional Swedish right considered governing with the direct or indirect support of the Democrats of Sweden (SD).

Long pariah, the nationalist and anti-immigration party is on the way according to the polls to grab an unprecedented second place, and to become the first formation of a new right-wing bloc.

The outgoing Prime Minister, Social Democrat Magdalena Andersson, hopes she will stay in power based on a "red-green" package, for a third term of four years in a row for the left.

The campaign was dominated by themes likely to favor the right-wing opposition: criminality and murderous gang settling, soaring fuel and electricity prices, problems with the integration of immigrants...

But the solid popularity of Ms Andersson, whose superior trust rating exceeds that of her Tory rival Ulf Kristersson, and the far-right bogeyman for centrist voters argues in favor of the left.

The five polling institutes give a very slight lead to the red-green camp, in their last salvos, but all are within the margin of error and the figures have been ultra-tight for two weeks.

The left bloc led by the Social Democrats - Sweden's largest party since the 1930s - with the expected support of the Greens, the Left party and the Center party, is credited with between 49.6% and 51, 6%.

The total of the rights – SD, Moderate Party (conservative), Christian Democratic Party and Liberal Party – sails between 47.6% and 49.4%.

"It's a very, very tight race," Prime Minister Andersson said on the last day of the campaign on Saturday.

"Of course I am worried about a government completely dependent on the Democrats of Sweden as the first party in government or the first support (...) It would be a different Sweden that we would have for four years".

The last two weeks of campaigning have seen the SD, led for the fifth consecutive election by their leader Jimmie Åkesson, overtake the Moderates in the polls, around 19-21%, above their record of 17.5% 2018.

Led for the second time by their leader Ulf Kristersson, the Moderates have lost ground around 16-18% in the latest opinion polls.

The post of Prime Minister traditionally falls in Sweden to the first party of the victorious alliance, but the parties of the traditional right are hostile to having SD ministers, a fortiori leaving them the post of head of government.

On the left too, the exact form of a future executive coming out of the polls remains marked by uncertainty: the Left party is hostile to seeing the Center exercise too much influence, and vice versa.

But according to political scientists, a political crisis similar to that which followed the 2018 elections - four months to form a government - is unlikely, this time the camps being better delimited.

The victory of the right supported by the extreme right would open a new political era for Sweden, which must take the rotating presidency of the European Union on January 1 and finalize its historic candidacy for NATO.

A new victory for the left would invalidate the strategy of a rapprochement between the right and the SD, which would both remain powerless in the opposition.

A total of 349 seats are at stake in a proportional vote, where only parties achieving more than 4% win seats. To be invested, a Prime Minister must not have 175 votes or more against him, but it is not necessary to have an absolute majority of favorable votes.

Some 7.5 million voters are called to the polls, but voting has already started in a Sweden that allows voting in advance. Turnout is traditionally very high in the Nordic country of 10.3 million souls: in 2018, it had exceeded 87%, the highest for 30 years.

"It's important to vote for a humanist government, and not one that is ruled by racist and right-wing politicians," one of these early voters, Samuel Skanberg, told AFP in Rinkeby, a suburb. underprivileged in Stockholm.

On Sunday, the polls open at 8 a.m. (0600 GMT) and close at 8 p.m., the time at which two exit polls are expected. More reliable partial results should be available two hours later.