Catalina Madueno (sub-delegate of Government of Spain in Jaen), and Pedro Luis Rodriguez (mayor of Andujar), presided today over the Local Security Board at City Council. 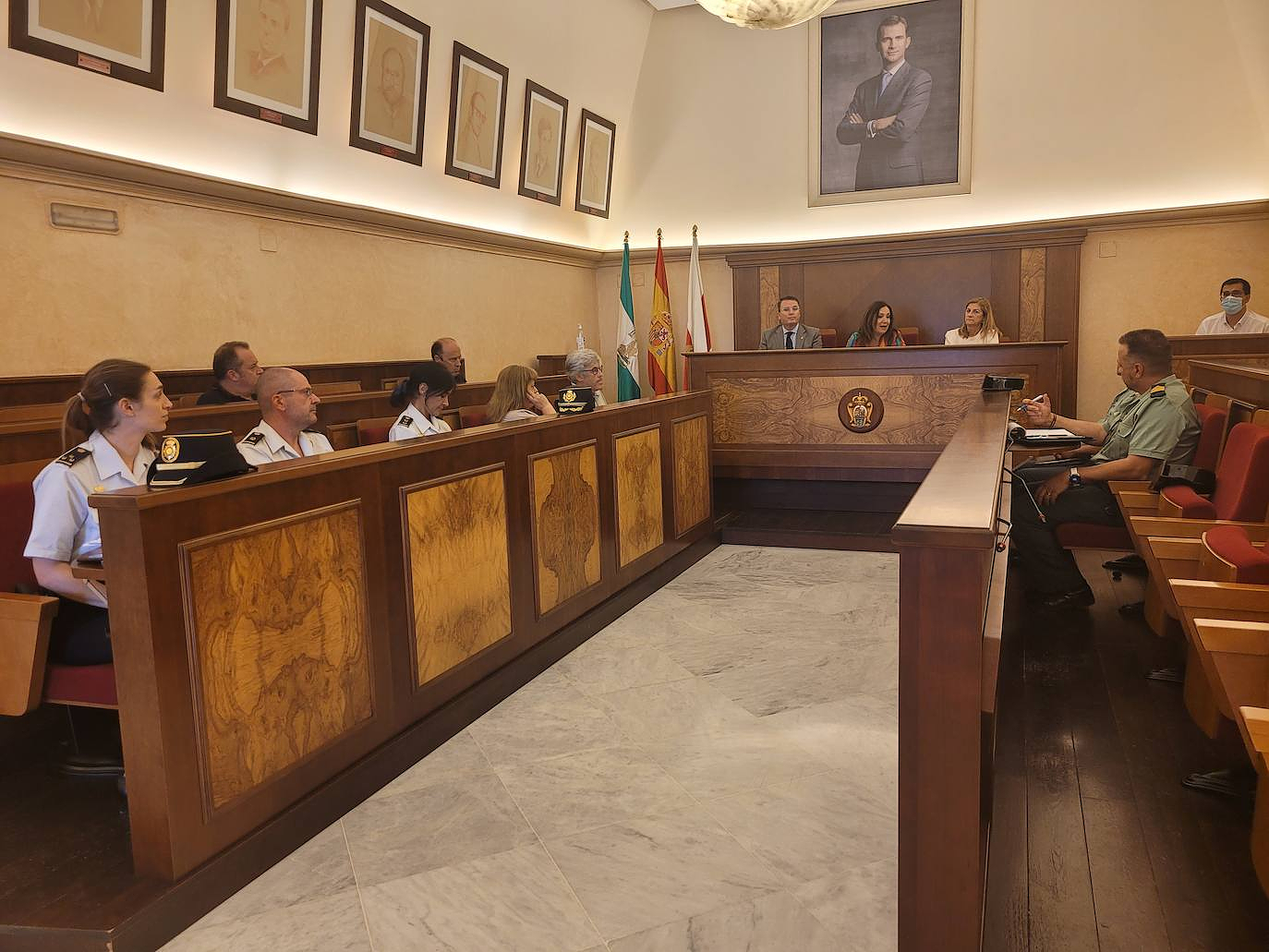 Catalina Madueno (sub-delegate of Government of Spain in Jaen), and Pedro Luis Rodriguez (mayor of Andujar), presided today over the Local Security Board at City Council. This board has initiated the necessary procedures to join the System of Tracing.

Comprehensive in cases of Gender Violence (VioGen) of the Ministry of the Interior. Layla Dris Hach Mohamed, Head of Operations Coordination Unit (UCOP), was present. She is responsible for the Andujar National Police Station as well as Miguel Soria, the head of Local Police. Juan Manuel Alarcon, the head of Violence Against Women Unit at the Government Subdelegation, Jaen, was also present.

"It's a very important move forward that this government group is taking to help end a social scourge which concerns us and that causes us a lot of pain, suffering in our society," stated the Executive representative. He also thanked the "interest, commitment, and sensitivity of the municipalities" who now total 35 in the province and are committed to joining Viogen Network to "eradicate any form of gender violence."

The Local Security Board approved the request to include the Local Police Corps in the Comprehensive Monitoring System for Gender Violence (VioGen System), and ratified the coordination and cooperation protocol between the Corps of the Local Police Corps and the National Police Corps. This will ensure that the victims of this social scourge are protected by the judicial protection measures.

The Executive representative in the province stressed that the main goal was to eradicate gender violence in the municipality, fight in a coordinated manner against this scourge and comprehensively protect the victims. Catalina Madueno stated that the objective of the province is to have all towns and cities free from sexist violence.

The sub-delegate thanked Andujar City Council for its cooperation and incorporation in the work to protect victims of gender-based abuse. This will be processed later, with the signing the VioGen agreement between Secretary of State and Security. The Comprehensive Monitoring System will allow the Local Police of Andujar to access it in cases of gender-based abuse, "since the mechanisms to monitor and protect victims have been established and preventative work is done to avoid any new cases," has been pointed out. The deputy delegate stated that gender-based violence requires all levels of society and government involvement. "This issue is one that requires maximum commitment from the Government of Spain."

He stressed the importance of "establishing agreements with municipalities to integrate information, forecast risk, monitor and protect victims, and engage in preventive work." This system is designed to strengthen protection measures for victims by coordinating actions between the General State Administration (in this case, the Andujar City Council) and local entities. It also helps to avoid new attacks. The agreement also allows the Local Police of the municipality access to the common database for Security Forces and Bodies. This allows it to monitor the victim of gender-based violence in the area and to provide protection, as there is continuous knowledge of their situation. It also allows them to evaluate the risk of being attacked again and to adopt the necessary protection measures.

Viogen Network is an application that gathers all information about victims of gender violence. It allows for the assessment of the risk and the creation of protection measures. This integration allows the Local Police and State Security Forces to work together in monitoring and protecting the victims assigned, access to the database, and an increase in funds for the Municipal State Pact.

Catalina Madueno stated that the system sends out the messages to all professionals involved in the restoration or improvement of victim's security. The sub-delegate also mentioned that the State Pact funds are used for training campaigns and information campaigns. These messages "are essential to raise awareness, help identify instances of inequality, and inspire actions to end gender-based violence."

The VioGen system in Jaen currently has 1,469 cases that have been discharged. This is slightly more than the 1,396 recorded a year ago. The sub-delegate stated that we must continue to work with coordination, unity, and commitment. She also said that 23 of these cases correspond to minor female victims. None are currently considered to be at high risk. In the same way, 1 335 protection orders for women are in effect in the province. "All forms abuse are a terrible social scourge. She concluded that it must be a problem that involves us all, the administrations, and society as a whole, because victims can't feel alone.

Since 2003, the official records have shown that 1,154 women were murdered by their ex-partners or partners. 47 minors have also been killed. 24 women have been killed so far in this year's year.

‹ ›
Keywords:
SubdelegadaPoneValorAyuntamientoAndujarInicieTramitesAdherirseSistemaViogen
Your comment has been forwarded to the administrator for approval.×
Warning! Will constitute a criminal offense, illegal, threatening, offensive, insulting and swearing, derogatory, defamatory, vulgar, pornographic, indecent, personality rights, damaging or similar nature in the nature of all kinds of financial content, legal, criminal and administrative responsibility for the content of the sender member / members are belong.
Related News