There was a very low attendance at the demonstration against the G7 summit.

The protest movement in Munich against the G7 summit, which begins at Schloss Elmau in the Bavarian Alps on Sunday, saw a smaller crowd and a lower attendance than anticipated. 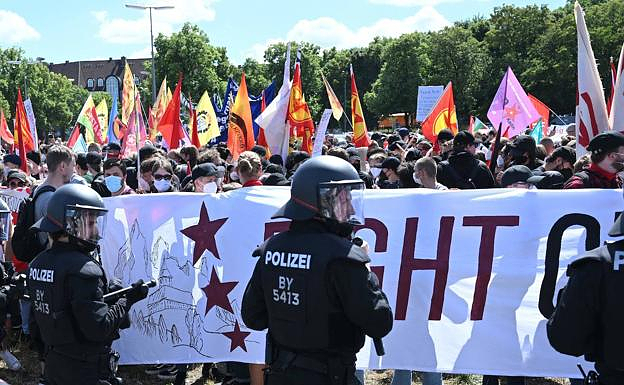 The protest movement in Munich against the G7 summit, which begins at Schloss Elmau in the Bavarian Alps on Sunday, saw a smaller crowd and a lower attendance than anticipated. This surprised even the security forces who deployed over 3,000 riot cops to manage it. According to police figures, around 4,000 people attended the protest, while organizers claimed that there were about 6,000. There were fewer people at the meeting than seven years ago when the G7 summit took place in the same location. Even the "black bloc", the group of violent ultra-left activists, was reduced to a minimum. Over 3,000 were anticipated and only 150 were counted.

Although there was some fighting with police officers when banners with anticonstitutional text, pyrotechnic materials, and people trying to march masked were found in searches, they didn't go beyond anecdotes. Protest organizers stated in a joint statement that the G7 countries must send a "clear and determined signal against global warming, to end destruction of nature, and also against hunger, poverty, and inequality." Participants carried large posters and banners against deforestation and rearmament, war and crises, and against inflation and global warming. They also protested against capitalism and in support of an independent Kurdistan.

The organizer of the demonstration had previously called for non-violence, and that their demands be met through peaceful means. Nancy Faeser (German Minister of Interior), had asked that the event be peacefully in the early hours. In statements to T-online, the minister stated that she hoped that all protestors would peacefully demonstrate, and that no one is injured or destroyed cars or shops. She also expressed concern about the possibility of violence being perpetrated by the so-called "black block".

"Coronavirus. Climate. War - Taxes to the rich and overcome poverty" was the message on a large poster that they carried with them by big heads bearing the faces of G7 leaders. In their written messages, left-wing groups claimed that they were fighting the G7 - Imperialism is meeting here. The march was attended by 15 anti-globalist, humanitarian and environmental groups. These included WWF through Bread for the world and Misereor. The march began in the centre of Bavaria and ended at the meadows where Oktoberfest is held.

The G7 summit is being held, as it was seven years ago, in the luxurious hotel in Elmau, now converted into a fortress, due to the security guarantees offered by the small valley where it is located, located about 10 kilometers from the well-known ski resort from Garmisch-Partenkirchen. To isolate the statemen, more than 18,000 soldiers are present, mostly policemen but also special army forces like mountain hunters. You must pass through twenty police checkpoints to get to the meeting spot.

Police filters allow residents, tourists, and supply companies to enter the area. However, they stop anyone from proceeding if they do not meet these requirements. Garmisch has been designated as the international press center. A group of 700 protestors has been permitted to establish camp during the summit. However, they will be closely monitored. The highway connecting Garmisch to Munich and its airport, which is where most delegations will travel, has been transformed into a hub of police cars and motorbikes that stop and inspect any suspicious vehicles.

‹ ›
Keywords:
FlojaAsistenciaGranManifestacionCumbreAlemania
Your comment has been forwarded to the administrator for approval.×
Warning! Will constitute a criminal offense, illegal, threatening, offensive, insulting and swearing, derogatory, defamatory, vulgar, pornographic, indecent, personality rights, damaging or similar nature in the nature of all kinds of financial content, legal, criminal and administrative responsibility for the content of the sender member / members are belong.
Related News