Photos of the two couples, in mourning clothes, their faces closed, appear on the cover of almost all the daily newspapers. 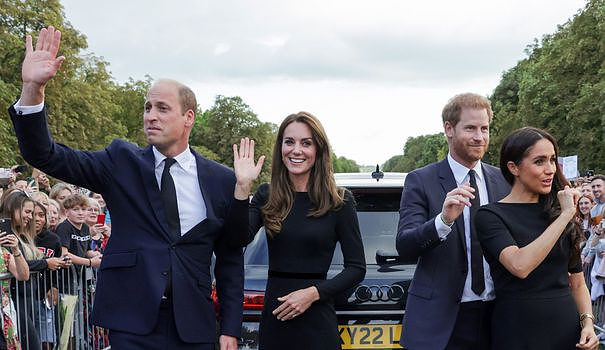 Photos of the two couples, in mourning clothes, their faces closed, appear on the cover of almost all the daily newspapers. "Reunited for Grandma", headlines the Mirror. "William hands an olive branch to Harry and Meghan after the Queen's death," the newspaper adds.

Reputed to be cold for months, this is the first time that the sons of King Charles III and their wives have been seen together since March 2020.

“The royals in conflict show unity”, retains the tabloid the Sun.

"Grieving together", headlines the Sunday Telegraph, which publishes on its front page the photograph of the two couples advancing side by side towards the crowd gathered in front of Windsor Castle and the flowers laid in tribute to Queen Elizabeth who died Thursday at 96 years later. ruled for more than 70 years.

On a dissonant note, however, in the Sunday Times: Even though the brothers showed their unity in Windsor on Sunday, the paper reports that it took behind-the-scenes "extended negotiations" between the two sides, delaying their appearance by around 45 minutes.

"By reaching out to put aside disagreement, the heir to the throne shows that he lives by following the inspiration of his grandmother", considers however the Telegraph.

"Anyone who worried that Queen Elizabeth's successors might not be able to match her sense of duty could breathe a sigh of relief," he continued.

The Telegraph evokes "extraordinary scenes" - the walkabout lasted 40 minutes - but also wonders "if the group is reunited for good or simply for one night".

"William and Harry reunited to mourn the queen", also underlines The Independent.

"How happy our dearly departed queen must have been, sitting up there on her cloud, to see the scene unfold before her eyes at Windsor Castle," writes the Daily Mail. "If only they could have done it in his lifetime. But no matter. His Majesty was nothing but a pragmatist: better late than never". "King Charles must also be happy," adds the daily.