The sending of migrants, a new political weapon for tenors of the American right

For months, local Republican officials, foremost among them powerful Texas Governor Greg Abbott, have bused migrants to Democratic strongholds across the country. 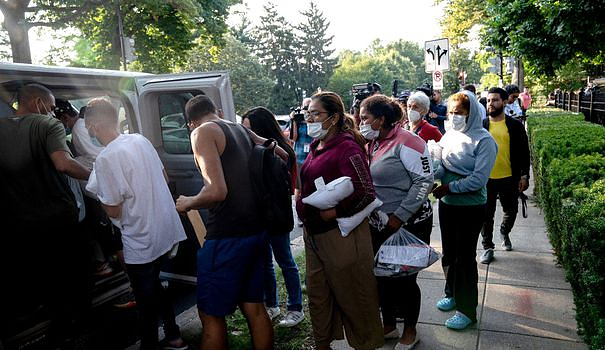 For months, local Republican officials, foremost among them powerful Texas Governor Greg Abbott, have bused migrants to Democratic strongholds across the country.

A way to denounce the policy of President Joe Biden, whom they accuse of having transformed the border with Mexico into a sieve, and of trying to place immigration at the center of the campaign for the mid-term elections in November.

Thursday morning, two buses carrying migrants arrived near the residence of Vice President Kamala Harris in Washington. A place obviously chosen on purpose, the Democratic official being in charge of the explosive file of immigration at the White House.

They had been sent by the very conservative Greg Abbott, campaigning for his re-election in this state at the forefront of the wave of illegal immigration from Central American countries.

“Vice President Harris claims our border is secure and denies there is a crisis. We are sending migrants to her backyard to urge the Biden administration to do their job and secure the border,” the governor tweeted. from Texas.

He claims to have already sent 10,000 migrants since April to Washington, New York and more recently Chicago.

On Wednesday, the influential Republican governor of Florida Ron DeSantis joined this movement, claiming to send two migrant planes to the island of Martha's Vineyard, a mythical vacation spot for the wealthy who hosted the Kennedys, the Clintons or the Obamas.

A group of about 50 Venezuelan migrants, including children, arrived on this island on the Atlantic coast of New England, a region rich in elites often the target of conservatives, on Wednesday.

Although the governor of Florida arranged the transport, the planes were arriving from Texas and not his state, according to local newspaper MV Times and a local politician.

"Migrants are being landed at Martha's Vineyard on charter flights from Texas. Many don't know where they are. They say they were told they would be given housing and employment," tweeted Wednesday night an elected local Democrat, Dylan Fernandes.

Ron DeSantis, also a candidate for re-election, is seen as a potential rival for former President Donald Trump in the race for the White House in 2024.

"Residents of Martha's Vineyard should be thrilled," Christina Pushaw of the Florida Governor's communications team tweeted on Wednesday. "Illegal migrants will make the city more diverse, which is a strength. No?"

Immigration policy, an explosive subject in the United States, is even more so a few weeks before the high-stakes mid-term elections.

Immigration is a favorite theme for Republicans, and moving migrants in spectacular operations offers them an opportunity to put the debate back at the center of the news.

Transporting these migrants to Martha's Vineyard and Washington "was a necessity", commented Andy Biggs, Republican representative of Arizona, a state whose governor also sends buses of migrants.

"Democratic leaders must come down from their ivory towers and face reality."

Conversely, the Democratic mayor of New York Eric Adams promised Thursday to focus on welcoming and not rejecting migrants.

"Exploiting vulnerable people as part of a political coup is outrageous and cruel," said Elizabeth Warren, a senator from Massachusetts, where the island of Martha's Vineyard is located.

Charlie Crist, Democratic opponent of Ron DeSantis in the race for the governor's seat in Florida, denounced a "political calculation" aimed at "serving fresh meat for his electoral base".

The candidate denounced the price of this operation, affirming that Florida was spending “12 million dollars to send innocent immigrant children away from our State”.