The scientific schooner Tara returns to France after a journey of 70,000 km

"We have no discovery to reveal to you", warned Romain Troublé, director of the Tara Foundation, during a press conference on the island of Groix (western France), after almost two years. 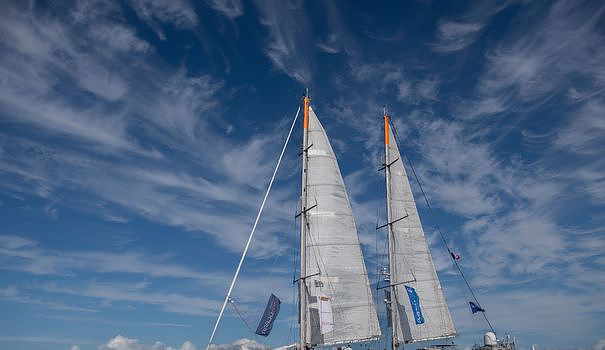 "We have no discovery to reveal to you", warned Romain Troublé, director of the Tara Foundation, during a press conference on the island of Groix (western France), after almost two years. mission "Microbiome".

During its trip from Chile to Africa, via the Amazon and Antarctica, the laboratory sailboat took nearly 25,000 samples of marine microorganisms (viruses, bacteria, prostites, etc.). After analysis, "within 18 months to two years, we will begin to have the first discoveries", according to Mr. Troublé.

At the base of the food chain, these micro-organisms, "invisible people of the sea", constitute more than two thirds of the marine biomass. They capture atmospheric CO2 and provide half of the oxygen we breathe.

“The question we ask ourselves is: how does it work? How do all these viruses, these bacteria, these marine microalgae manage to interact to produce oxygen, store carbon and produce proteins?”, explained Roman Troubled. "And how will it change tomorrow with climate change and pollution?"

The schooner is particularly interested in plastic pollution and the impact of the Amazon River, whose flow is around 200 million liters per second, on the life of the oceans and the ocean microbiome.

“We think that the Amazon has a role in the development of sargassum”, noted Samuel Chaffront, researcher at the University of Nantes (west).

These invasive algae, which proliferate in the West Indies, give off toxic fumes when they rot on the shore.

"One of the hypotheses is that Brazil's deforestation and increasing agriculture have increased the discharge of nitrate fertilizer into the Amazon," Chaffront said. "This will allow the development of these sargassum (...) which we find as far as the African coasts."

The data collected by Tara during previous missions has given rise to more than 250 publications in the scientific press.

The 36 m long and 10 m wide schooner, with several laboratories on board, accommodates 14 people, including half a dozen scientists of all nationalities.

She will leave again in the spring of 2023 to study chemical pollution off the European coast.