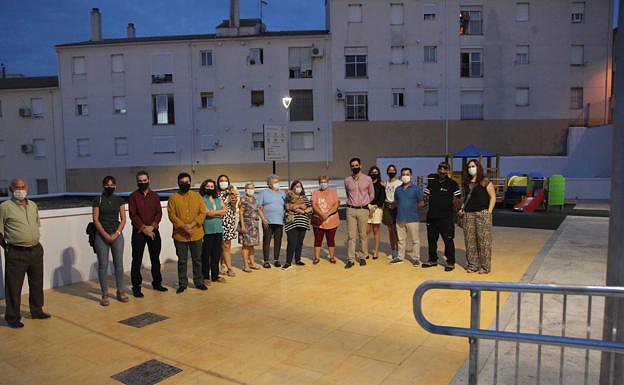 Last Friday, La Tejuela's neighborhood premiered its park at Avenida de Portugal between Grecia and Ireland streets. It also saw the lighting of the local sports courts, which had been lacking it until now. Marino Aguilera, the mayor, and Mercedes Flores, the mayor of Urban Planning, Works and Services, attended the appointment.

It is a long-awaited moment. Marino Aguilera stated that remodeling these tracks was a difficult job with many setbacks. He said that he had to do it responsibly and was determined to meet the needs of La Tejuela residents, who Marino Aguilera stressed during his speech.

Remodeling the Avenida de Portugal sports courts is a project that was not approved by the previous legislature. The work was awarded in part and did not include critical items. After arriving at the Government, we had to make changes to poorly defined project elements. "We have made the park more secure by putting in perimeter fences. We also avoided any inconvenience caused by the sports courts for neighbors who bet on other types, "said Mercedes Flores, the mayor of Works and Services.

In spring/summer, the park will be open from 9:00 am to 10:30 pm and autumn/winter from 9:00 am to 9:00 pm. The budget for the park was EUR415,647.75. To that will be added the gardening item, which is approximately EUR14,000. Flores stated that the green areas would be planted in fall when the environment is more favorable. This includes trees and shrubs as well as vines and flowers that are distributed in the many flower boxes throughout the park>>.

Gallery. There are recreational areas for children and adults in the park. IDEAL

There are two levels to the enclosure, and you can access it through Grecia street or Ireland street. There are many play areas inside, including ping pong tables, petanque courts, and an area where you can do calisthenics.

Four points of light were added to the premiere, located next to the Sanchez Cuenca home. This improvement will allow for the neighbors to practice their sports, who had, until 2015, no access or lighting. The area's competent mayor also stated that a fountain will be installed on the premises.

‹ ›
Keywords:
ParqueAvenidaPortugalAbiertoPúblico
Your comment has been forwarded to the administrator for approval.×
Warning! Will constitute a criminal offense, illegal, threatening, offensive, insulting and swearing, derogatory, defamatory, vulgar, pornographic, indecent, personality rights, damaging or similar nature in the nature of all kinds of financial content, legal, criminal and administrative responsibility for the content of the sender member / members are belong.
Related News