The museum made Bilbao famous in one fell swoop

The sun's brilliance, which is caught on the titanium plate coverings, is reflected in gold and silver. 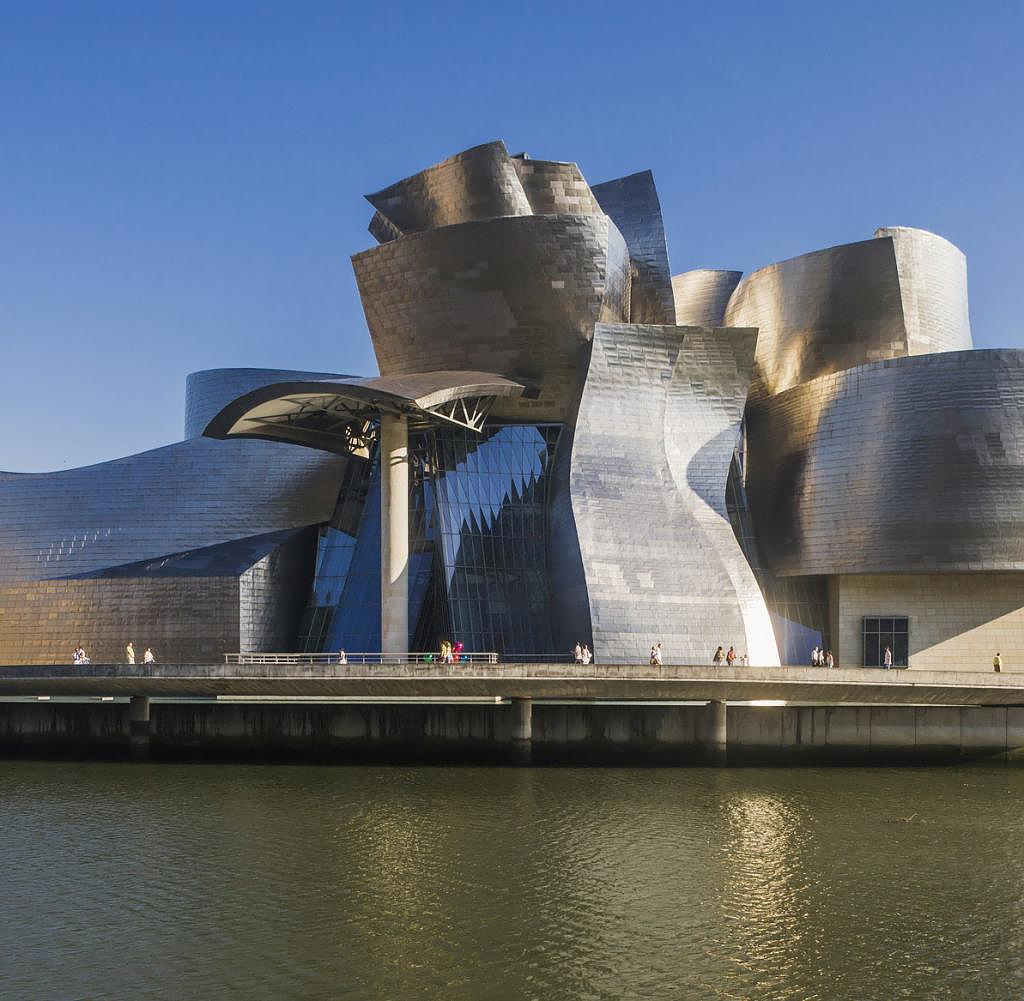 The sun's brilliance, which is caught on the titanium plate coverings, is reflected in gold and silver. The structures fan out imaginatively towards the sky. "Metal flower", as the saying goes. Or is it more reminiscent of a ship that has docked on the banks of the Nervión?

The Guggenheim Museum of Modern and Contemporary Art plunges the viewer into a frenzy of spectacular architecture. Frank O. Gehry designed his avant-garde masterpiece for an invitational competition that marked the beginning of Bilbao's comprehensive urban renewal. After four years of construction, the museum celebrated its opening in October 1997. Now it is 25 years old and is still the pride and symbol of the old industrial metropolis.

The construction gave the initial impetus to tourism and brought about the transformation of Bilbao from a rough and gray image to a visitor destination of international standing. The "Bilbao effect" is now a term for the "specific upgrading of places through spectacular buildings by architects". It even says so as an entry in the Internet encyclopedia Wikipedia.

“Gehry's building spectacle put Bilbao on the map of culture-savvy tourists in one fell swoop because it spread as if of its own accord as an iconic image – similar to that of the Sydney Opera. Added to this was the popular name Guggenheim,” analyzes Falk Jaeger, architecture professor and architecture critic from Berlin.

Many cities have long tried “to take advantage of the Bilbao effect with significant buildings by star architects, mostly museums, from Reykjavik to Graz, from Manchester to Valencia,” says Jaeger, who comes to the conclusion: “That rarely works, or it fails terribly, as in Lyon, where the Musée des Confluences by the architects Coop Himmelb(l)au is stored as a gigantic construction project on the banks of the Rhône and is only one thing: ugly.”

On the other hand, Jaeger highlights the Norwegian capital Oslo as a continuously growing positive example: “Oslo was able to record a Bilbao effect with its opera in 2008 (Snøhetta Architects), but multiplied in 2020 with the Deichmann Library (Lund Hagem Arkitekter), in 2021 with the spectacular Munch Museum (Estudio Herreros) and in 2022 with the National Museum (Schuwerk and Kleihues), with which Oslo’s harbor edge became a string of pearls of impressive cultural buildings.”

It was logical that other cities in northern Spain wanted to build on the Bilbao effect simply because of their geographical proximity - with sometimes sobering results. In Oviedo, the intended upgrading by Santiago Calatrava's brightly lit Congress Palace has sunk into darkness.

The industrial city of Avilés, which adorned itself with a cultural center designed by the Brazilian Oscar Niemeyer, has completely disappeared. But the futuristic architecture was and is too lifeless for that, the proximity to smoking chimneys too repulsive, the cultural program too provincial.

The cultural city of Galicia by Peter Eisenman in Santiago de Compostela has become a symbol of excessive waste of money, its scattered constructs perching on a hill outside like foreign bodies and disfiguring the landscape. Hardly anyone, even the locals, wants to go there, unless students and researchers have to go to the library or the regional archive.

The situation is different in the port city of Santander, where the Botín cultural center has been setting innovative accents since 2017 and is well received by the locals - if only as a destination for walks along the bay promenade.

The work of the Italian Renzo Piano, who was supported by the Spaniard Luis Vidal, is modeled on a two-part pier that protrudes on pillars.

Those traveling to Bilbao for the Guggenheim Museum should beware of misconceptions about an art mecca. The museum only has a few permanent exhibits, including a 'Bouquet of Tulips' by Jeff Koons on the terrace next to the water gardens and steel behemoths by sculptor Richard Serra in the longest gallery at 130 meters.

There are usually two or three temporary exhibitions of the most varied quality running in parallel, which can sometimes be disappointing. Under the guise of art, motorcycles, vintage cars and antique porcelain from China have been on display over the past quarter century, as well as fantastic exhibitions such as those by David Hockney.

Architecture critic Jaeger takes issue with "the fact that the radiant building has its flaws in the details and does not function well as a museum". He considers the Serra gallery to be disproportionate and “monstrous”, the routing to be “strange” and the structural details to be “cruel to look at”. The expert may see this differently than the layman, because basically it is neither about the little things nor about what is actually in the temporary exhibitions.

The overall effect is crucial. Gehry deliberately managed the feat of elevating an art museum itself to the most important exhibit: a mega-sculpture of angular and dynamically curved forms, symmetries and asymmetries, interlacing of the elements limestone, glass and titanium. To this day, one can bow deeply to this achievement.

Lifting stones, chopping wood, moving weights: "Herri-Kirolak" is the name of the traditional sport in the Basque Country. In several disciplines, the main focus is on strength and endurance. In the past, only men took part in the competitions, but that is changing now.

‹ ›
Keywords:
SpanienLänderporträtsBaskenland (Spa)RegionenporträtsStädtereisenGehryFrankMuseenArchitekturArchitektenRhoneDesignGuggenheimLyonAndreas DrouveKunstOsloBilbaoEffekt
Your comment has been forwarded to the administrator for approval.×
Warning! Will constitute a criminal offense, illegal, threatening, offensive, insulting and swearing, derogatory, defamatory, vulgar, pornographic, indecent, personality rights, damaging or similar nature in the nature of all kinds of financial content, legal, criminal and administrative responsibility for the content of the sender member / members are belong.
Related News