The Ibex begins the semester with more falls, at the edge of 8,000

The first portfolio adjustments of the new semester do not change the sign of the market. 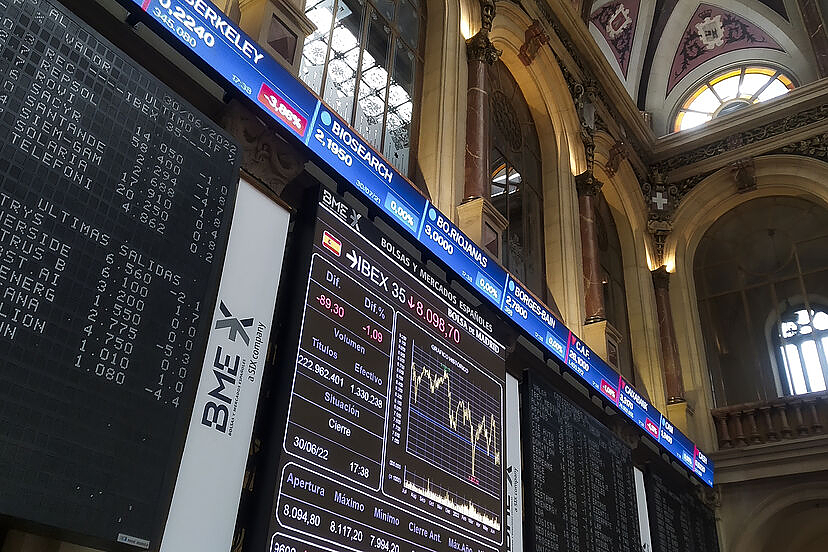 The first portfolio adjustments of the new semester do not change the sign of the market. The red numbers persist on the stock market, with an eye on the CPI for the eurozone. Economic fears extend falls to oil and debt interest. The Ibex loses ground and endangers the 8,000-point barrier.

For months the shadow of the recession was hovering over the financial markets. Investment firms began to contemplate this possibility in their bearish scenarios. But with the passage of time, and of macro and monetary references, the option of a recession is already making its way as the base scenario, the most probable, for a good part of the analysts.

The magnitude of both central bank rate hikes and the economic slowdown depends largely on the persistence of historical levels of inflation. Data such as this week's CPI for Spain, with a new high of 10.2%, reflect that prices had not yet peaked. A litmus test to calibrate inflation will be known today, with the publication of the Eurozone CPI for the month of June. Analysts expect a new rise, reaching 8.4%, a level that would open the door to more aggressive rate hikes by the European Central Bank. In recent days, analysts have valued the option of a rebound of 50 basis points, double what was expected, at this month's meeting, a scenario that is in line with one of the messages that has transferred the most pessimism to the market this week, the Fed's acknowledgment of the damage that rate hikes will do to growth.

The combination of inflation, slowdown and rate hikes continues to fuel pessimism among investors, and this lack of confidence carries over to all markets. Oil suffers from fears of recession, with the consequent impact on demand, and despite problems in supply, the barrel of Brent falls to 108 dollars. In the United States, the West Texas-type barrel fell to 104 dollars.

The drop in oil prices softens inflationary pressures, and along with fears of recession accelerate the taking of positions in a defensive asset such as public debt. The rise in price deflates the interest on the bonds. The yield on US ten-year debt falls below the 3% barrier again, shortly after hitting a record high of 3.49%. In Europe, the interest on the German bund deflated to 1.3%, and in Spain the yield on the ten-year bond fell to 2.4%.

Variable income this time fails to take advantage of the decline in interest on debt and oil. Recession warnings weigh more on investors' spirits, and pessimism once again generalizes falls. The day in Asia has contemplated a corrective of 1.70% in the Nikkei index of Japan. Wall Street can't shake the red numbers, and futures anticipate further declines.

Europe extends its falls at the start of the semester, and the Spanish stock market has all the references from abroad against it, at least until the publication of the Eurozone CPI. The Ibex points once again to the downside, and in its declines it again puts at risk the 8,000 point barrier that was in danger during some moments of the previous session. The 7% loss in the first half is still not enough to discount the economic and business fears of investors.

The rest of the European stock markets are unable to stop the falls. A further tightening of the ECB's rate hikes, amid the risk of a lack of energy supply, would further aggravate the expected downturn in the European economy. The Stoxx 600 index is already trading at the edge of the 400-point level, a day after the German Dax and the French Cac lost the 13,000-point and 6,000-point barriers, respectively.

The prevailing risk aversion in the market translates into new signs of firmness in the dollar. The euro, on the other hand, is stuck at 1.04 dollars, while the British pound struggles at times to maintain the threshold of 1.21 dollars.

The firmness of the dollar and the determination of the central banks to fight inflation, even at the cost of growth, is taking its toll on the price of gold. The precious metal punctures and begins the new semester with intraday lows below $1,800 an ounce. In the cryptocurrency market, bitcoin also suffers at the beginning of the semester, and consolidates below the reference of 20,000 dollars.