After warning residents to take shelter via a message broadcast on all cell phones, numerous police cars arrived in this isolated town in central-western Canada, AFP journalists noted on the spot. 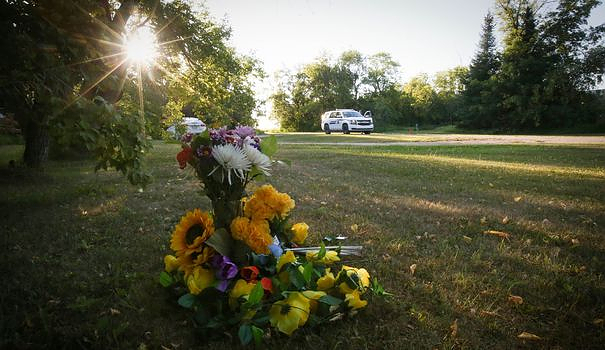 After warning residents to take shelter via a message broadcast on all cell phones, numerous police cars arrived in this isolated town in central-western Canada, AFP journalists noted on the spot. .

Two brothers from the region - Damien and Myles Sanderson - are suspected of having spread terror in this village and the one next door on Sunday by stabbing 10 people to death and injuring 18 others before fleeing .

Since then, hundreds of police have launched a major manhunt. After more than a day of tracking, the police finally discovered the body of Damien Sanderson, 31, near one of the localities where the murders took place.

The circumstances of his death remain to be clarified, but he could have been killed by his brother, according to the police.

Myles Sanderson, 30, is still at large and wanted.

Known to the police and the justice system, this suspect, who could himself be injured, had already been wanted since last May for not having respected his judicial control. He had been sentenced to almost five years in prison, in particular for theft.

The murders affected first this indigenous community in James Smith Cree Nation and then the neighboring town of Weldon in Saskatchewan, a large rural province with a very sparse population in the center-west of the country.

"Our lives will never be the same again," said AFP Ruby Works, 42, who lives in Weldon. "People are afraid to leave their homes", continues the one who mourns the death of her thirty-year-old friend, Wes Peterson, killed on Sunday.

Today, people "lock themselves in. They are afraid. They could come back and start again", she slips before confiding that she herself will not be able to sleep "until they have caught it ".

According to the police, some victims were targeted while others were randomly beaten. But the vast majority of them are indigenous. Since then the community of James Smith Cree Nation has declared a state of emergency.

On social networks, many members of the Cree community (one of the First Nations of Canada) expressed their sadness and fear. And the messages calling on Myles Sanderson to surrender multiplied.

Bobby Cameron, the leader of the Federation of Sovereign Indigenous Nations (FSIN), which represents communities in the province, implored "all the people of Saskatchewan to share any relevant information".

“Uncertainty continues to cause immeasurable stress and panic among our families, friends and neighbors. They have suffered enough already,” he added.

The community has already experienced episodes of violence. Last year, almost to the day, a shooting killed two people there.

In Canada, aboriginal people represent approximately 5% of the 38 million inhabitants, and live in communities often ravaged by unemployment and poverty.

According to the latest official figures, 50% of the population of the community is under the age of 24 and the unemployment rate there is 24%. Several officials also pointed to drug and alcohol problems as well as difficulties related to the generational trauma caused by a century of abuse, particularly in residential schools created for the natives.

Darryl Burns, whose sister was killed on Sunday and who knew the two suspects, told local media that the brothers were "products of residential schools" and "had a lot of anger."

In recent years, Canada has experienced a succession of events of rare violence for the country.

In April 2020, a shooter posing as a police officer killed 22 people in Nova Scotia. In January 2017, six people were killed and five were injured in attacks on a mosque in Quebec.