Tuesday's action by the Ministry of Transport, Mobility and Urban Agenda of Spain (Mitma), was an important step towards the long-awaited construction of a third lane along the A7. 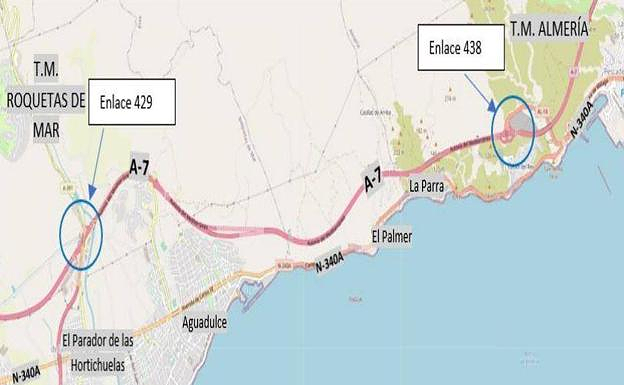 Tuesday's action by the Ministry of Transport, Mobility and Urban Agenda of Spain (Mitma), was an important step towards the long-awaited construction of a third lane along the A7. This will help alleviate traffic congestion issues that can be experienced both permanently and when El Canarete is closed due to frequent landslides. Provisionally approved is the project to create the third lane between El Parador's junction 429 and the Port of Almeria's junction 439.

This is the final step before the works can be made available for tender and their execution. The next step is to submit the project for public information, which will result in its publication in the Official State Gazette.

The Government claims that this project will increase road safety and capacity by adding a third lane in each direction of traffic between the junctions of A7. According to the geometric definition of the section, it measures 9.46 km. It will require an investment of 52.8 millions euros. This project is possible because of the expansion in the tunnels, bridges, and other sections that made up the section. Without it, the investment and time required would have been significantly higher.

The final action, which will continue without setbacks in the bidding procedures, is less ambitious that what was proposed in years past in the province. It also includes special demands from the Poniente cities councils. Some people demanded that the third lane be extended to Vicar, El Ejido and Viator in Poniente. It will remain on the most problematic section at the moment. This is the one that handles large volumes of traffic and generates huge traffic jams due to rear-end collisions. These are common given the sheer number of vehicles.

It is important to remember that another project, which aims to alleviate traffic problems at El Parador's communications hub link 429, is also in progress. The same thing was done by the Government a year ago with the third rail. That is, it initially approved and presented publicly the plans for remodeling this link. These allegations are currently being evaluated before final approval and bidding.

‹ ›
Keywords:
VerdeGobiernoProyectoTercerCarrilRoquetasAlmeria
Your comment has been forwarded to the administrator for approval.×
Warning! Will constitute a criminal offense, illegal, threatening, offensive, insulting and swearing, derogatory, defamatory, vulgar, pornographic, indecent, personality rights, damaging or similar nature in the nature of all kinds of financial content, legal, criminal and administrative responsibility for the content of the sender member / members are belong.
Related News