The difficult parade against the threat of small drones

How do you spot a slow, low-flying craft over a crowd and neutralize it without causing damage?</p>The prospect of the Rugby World Cup and the Paris 2024 Olympic Games, in particular the hundreds of thousands of people expected along the Seine for the opening ceremony, gives French public authorities cold sweats. 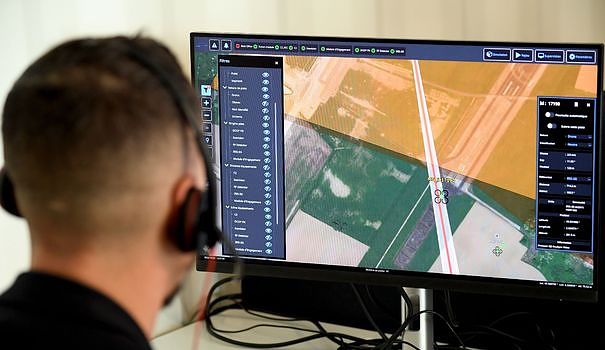 How do you spot a slow, low-flying craft over a crowd and neutralize it without causing damage?

The prospect of the Rugby World Cup and the Paris 2024 Olympic Games, in particular the hundreds of thousands of people expected along the Seine for the opening ceremony, gives French public authorities cold sweats.

Also for the military, the massive use of small kamikaze drones, sometimes in swarms, during the Nagorno-Karabakh conflict in 2020 and the use in Ukraine of commercial drones for reconnaissance or targeting constitute new vulnerabilities.

Protecting against small drones, the number of which has gone from 400,000 to 2.5 million in France in five years, is a "(near) impossible mission", even deputies noted in a report published in 2021.

Sign of the urgency, the French Ministry of the Armed Forces must receive at the beginning of the year the first six anti-drone Parade systems (Protection deployable modular antidrones), nine months after the signing of the contract, for an amount of 350 million euros. euros over eleven years.

Assigned to the Thales and CS groups, Parade is "optimized for the detection and neutralization of micro and minidrones (from 100 grams to 25 kilos) but it can do more", explains Thierry Bon, director of the fight against drones at Thales, to the occasion of a demonstration on the former air base of Brétigny, near Paris.

Data from a tripod-mounted radar capable of detecting a drone up to 5 kilometers away, direction finders that locate the drone by the radio waves it emits, and optical and infrared cameras are merged into a single interface, managed by an operator.

Once detected and followed automatically by the camera, the operator activates a jammer two kilometers away from the drone which has just entered the fictitious exclusion zone, forcing it to land or to reach a predefined point.

"Between the moment when the drone is detected and when it arrives at its target, the operator has about thirty seconds", according to Egidio Cau, deputy director of the fight against drones at CS group.

To cover larger areas, several systems can be interconnected.

One of the difficulties - solved, according to the consortium - was to avoid false alarms because "for a radar, there is nothing that looks more like a drone than a bird", notes his deputy Tony Valin.

Still, the technological challenges remain immense, he concedes. Almost all commercial drones are piloted remotely and therefore emit waves that can be jammed.

But the increasing autonomy of drones, whose trajectory is predetermined and which then no longer emit electromagnetic waves, frees them from this interference.

Parade's architecture is therefore designed to be open and to integrate other interception methods.

A laser, the Helma-P from Cilas, capable of grilling a drone in less than ten seconds at 1,000 meters, should be available in 2024.

Thales is working on an "electromagnetic effector", a kind of large ball that emits a powerful wave several hundred meters against a drone, rendering it inoperative in a second.

Other potential additions could be interceptor drones that would net the hostile drone or jammer drones. Studies are also being conducted on the acoustic detection of drones.

For Egidio Cau, "you need a multi-sensor approach, there is no magic system".

As for the Iranian drones, much larger and weighted with several tens of kilos of explosives which fall on Ukraine, "they fly at 3,000 meters then descend steeply, it is unstoppable".