The company to follow: Aker Carbon Capture, the company that wants to sequester CO2

The value of tomorrow is produced in partnership with Zonebourse. 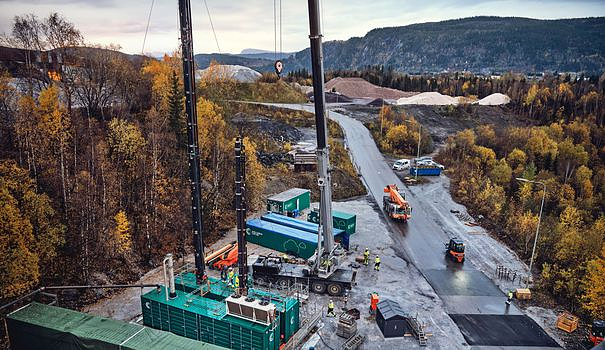 The value of tomorrow is produced in partnership with Zonebourse.com

Capturing CO2 from industrial facilities to store it or reuse it is one of the weapons available in the arsenal of the fight against global warming. If we are to believe some minds sharpened on the issue, it is even a necessary step in any serious global strategy in this area. Strangely, this technology has long been a blind spot in the fight against global warming, torn between divergent interests, its cost and a good dose of dogmatism. The engineers themselves have already mastered the process, which has been used for a long time in the oil industry, but more incidentally: to optimize production more than for ecological reasons.

Urgency obliges, the number of installations in service is growing and dozens of demonstrators are being tested. It is in this environment that Aker Carbon Capture evolves, a company that is part of the empire of Kjell Inge Rokke, a colorful character who became one of the richest men in Norway after starting out as a simple fisherman, the story tells us. Through its holding company Aker ASA, Rokke reigns over a galaxy of companies ranging from maritime services to oil transport, including biomarine ingredients, shipbuilding and even software publishing.

Aker Carbon Capture was spun off from Aker Solutions and floated on the stock exchange in the summer of 2020. The company's dowry included the team dedicated to CO2 capture, a portfolio of patents and more or less advanced projects. And the prestige of the company that had designed and deployed the mother of all CO2 capture and storage installations, on the Sleipner platform in the North Sea, as early as 1996. Aker Carbon Capture uses a classic capture solution based on amine solvent, but has significant experience that allows it to exist in a sector where big engineering companies, oil giants and start-ups compete. The proof ? Two large capture devices are being deployed, in a Norwegian cement plant and a waste recovery plant in the Netherlands.

Despite its references and its seniority, Aker Carbon Capture is not a mature company. Moreover, the deployment of complex and expensive installations such as those which have just been mentioned is long and immobilizes considerable resources. It takes several years to hope to be able to reap the benefits, with a significant risk of drift, both in terms of schedule and costs. What's more, the customer has purchased a certain level of performance in carbon capture, which means living up to the supplier's promises. Aker Carbone Capture has an easily readable offer for manufacturers: "Just Catch", a compact and modular design capable of capturing 40 to 100 kt per year, deployable in fifteen to twenty-four months. And "Big Catch", a tailor-made installation with a capacity of more than 400 kt per year, deployable in thirty to thirty-six months.

As far as the financial aspect is concerned, we remain in a configuration of society in an early phase. Aker Carbon Capture earned 363 million Norwegian crowns (approximately 34.5 million euros) in turnover in 2021 for an operating loss of 195 million crowns (approximately 18.5 million euros). Losses are expected to peak this year at 223 million crowns for 768 million in turnover, before reducing as the facilities begin to operate.

The company has the advantage of being backed by a robust shareholder and of having proven technology, which gives it some assets to bring its main projects to commercial maturity. The challenge is twofold. Not only to achieve operational balance, perhaps in 2025. But above all to have showcases to convince other manufacturers to launch their own capture projects.