"The coach wasn't particularly nervous, but encouraged us"

Germany's basketball players had the game firmly under control when the Bosnians, in the person of coach Aziz Bekir, tried to heat up the atmosphere in the hall a little. 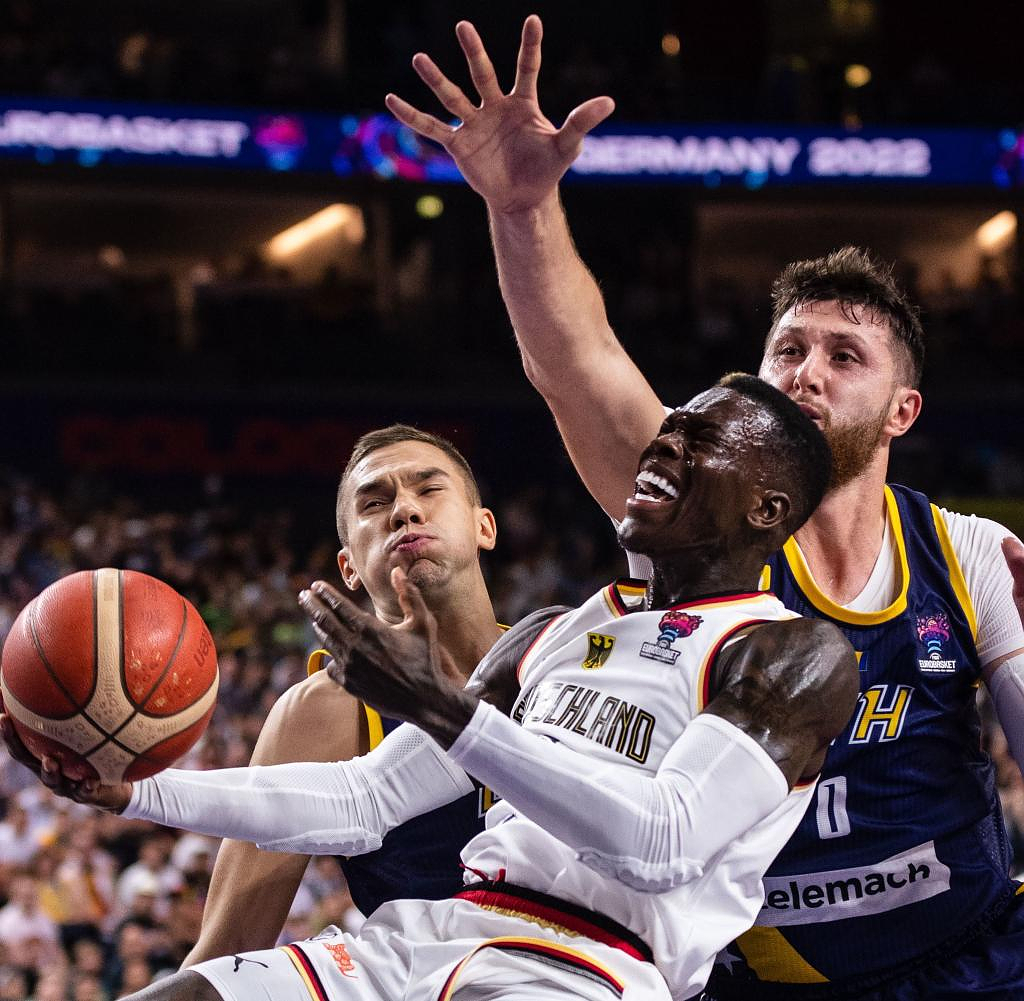 Germany's basketball players had the game firmly under control when the Bosnians, in the person of coach Aziz Bekir, tried to heat up the atmosphere in the hall a little. In the final quarter, with the score 75:60 for Germany, Bosnia's coach accused his colleague Gordon Herbert of gesturing too much in his direction.

The national coach took the accusations in the usual manner almost impassively. Herbert was able to calmly counter the unnecessary excitement. His team, led by Dennis Schröder, passed an important maturity test on the floor that afternoon.

The German basketball players also won their second group game of the European Championship. Germany won against Bosnia-Herzegovina 92:82 (42:47). However, the victory was hard-fought. Only a significant increase in performance in the second half brought the DBB selection a big step towards the round of 16. "We were very surprised in the first half, Bosnia was very aggressive and didn't let us get into our systems. We then attacked in the second half," Schröder explained to Magentasport after the game.

"It's a completely different basketball team, so we had to adjust a bit. We want them to have to react to us," Gordon Herbert explained before the game at Magentasport. The national coach referred to the individual class of the Bosnians, especially those of Dzana Musa and Jusuf Nurkic. Shortly afterwards, Herbert should feel confirmed in his words.

Musa in particular was difficult to defend from the DBB team in the first minutes of the game. The 23-year-old, who will join Real Madrid next season, had quickly scored seven points. Germany acted - as in the first game against France - in the first few minutes offensively rather bumpy. Schröder missed his throws, but successfully pulled to the basket several times.

The substitutions of Maodo Lo and Johannes Thiemann in the middle of the first quarter briefly gave the German team new energy. But Bosnia skilfully used Nurkic again and again as a blocker to initiate attacks - and successfully complete them. The almost 130 kilogram heavy but agile center has been playing in the NBA since 2014; for the Portland Trail Blazers for five years. Even in the first group game, the center had scored 19 points in 20 minutes despite foul problems. After the first quarter Bosnia led 20:18.

In the second quarter, the Bosnians continued to use the many gaps in the German defense that were striking compared to the win against France. Musa in particular was allowed to score almost at will at times. At the latest when the score was 20:29 (13th) from a German point of view, many spectators in the Cologne Arena realized what the Bosnians were doing at this European Championship: not as favorites, but as a team with the potential to scare the favourites.

“There is no reason for euphoria. It will be difficult again against Bosnia, they recently won against France in the World Cup qualifier,” Thiemann had also warned in advance. The German team didn't want to make the same mistake they made nine years ago. Germany had already started a European Championship in 2013 by beating France – and were eliminated after embarrassing defeats against outsiders like Great Britain and Belgium.

Herbert's team found it difficult to find their rhythm in attack against Bosnia. During a break, the national coach said several times what he demanded of his players: "Discipline." His team lost seven turnovers in the first half alone. Germany could at least rely on Andreas Obst in the second quarter. The winger hit a deep three before being fouled on another attempt. Obst shortened to 31:33 (15th).

Bosnia's Musa and Nurkic continued to dominate the game at both ends of the pitch. A scene just before half-time is significant: first the center Schröder cleared the lay-up, then Musa completed the quickly played attack to make it 45:34 for Bosnia (18th). At the break, the two Bosnians had scored 31 points together. Germany's NBA professional Franz Wagner, on the other hand, had to remain on the bench for a long time with three fouls.

Johannes Voigtmann, whose new club Olimpia Milan had been announced the day before the Bosnia game, opened the second half with five points in a row. Schröder hit his first three of the tournament to 50:47 for the DBB selection. Germany now defended much more aggressively, while the Bosnians increasingly argued with the referees. Thanks to the overheating Wagner, who ended up with 18 points like Schröder, the German team continuously extended their lead and, despite a short, nervous phase of weakness in the final minutes, deservedly won in the end.

At the European Championship, Germany now meets Lithuania in the third group game (Sunday, 2.30 p.m., Magentasport). "We were a bit wild in the first half. The coach wasn't particularly nervous, but gave us courage," emphasized Wagner on "Magentasport". "It's important that we recover well and go into the game with the right attitude tomorrow. Lithuania will be a different game again.” After that, European champions Slovenia and outsiders Hungary are waiting for the Herbert team. The top four teams in the group of six advance to the round of 16.

‹ ›
Keywords:
BasketballSchröderDennisDeutscher Basketball BundHerbertGordonDennis SchröderUngarnGordon HerbertFranz WagnerAziz BekirFussballSlowenienFrankreichLitauenEM
Your comment has been forwarded to the administrator for approval.×
Warning! Will constitute a criminal offense, illegal, threatening, offensive, insulting and swearing, derogatory, defamatory, vulgar, pornographic, indecent, personality rights, damaging or similar nature in the nature of all kinds of financial content, legal, criminal and administrative responsibility for the content of the sender member / members are belong.
Related News